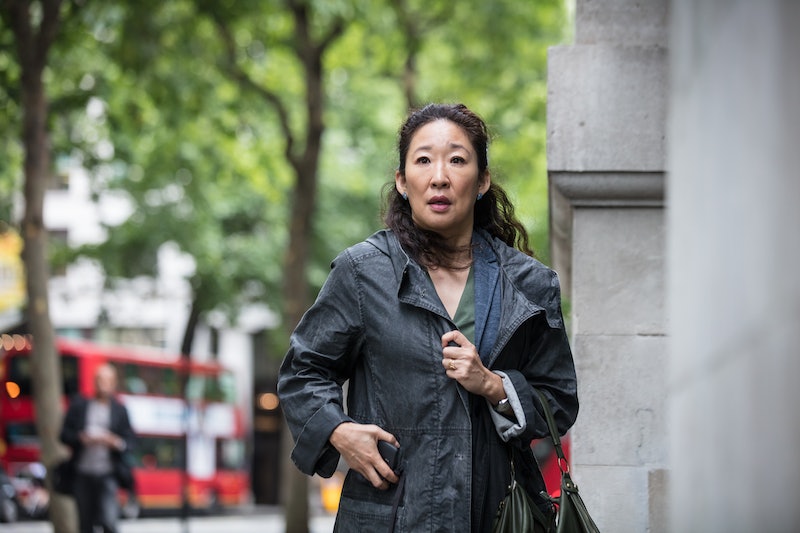 There's never really a shortage of spy narratives on television, but Killing Eve, premiering April 8, aims to put a new spin on an old classic. In the BBC America show, a government security agent and a hired assassin — played by Sandra Oh and Jodie Comer, respectively — will stop at nothing to take each other out, and it seems like things get very dicey very quickly. But is Killing Eve a true story?

All signs point to the series being a work of pure fiction, but there is some source material for the show to work with. According to BBCA, the new show is based on the series of Villanelle novellas by Luke Jennings, about a Russian orphan-turned-assassin named Villanelle and, Eve Polastri, the M15 agent tracking her. The novellas have been collected into two e-books.

Aside from taking inspiration from the books, there does seem to have been very clear intent behind the making of the drama. Sarah Barnett, president and general manager of BBC America, told Variety that taking this genre and presenting it through a different lens than the typical male-heavy spy stories made Killing Eve a particularly intriguing subject. "Cat-and-mouse and assassin stories have been told so many times and for good reason: There is an enduring appeal there," she said. "What was so fascinating was that making these two leads female casts the genre in a whole new light. You realize how implicitly masculine this form of storytelling has been." Two other important characters — Eve's boss and assistant — are men in the books but women on screen (played by Fiona Shaw and Kirby Howell-Baptiste.)

“There was a meeting at one point where someone actually said, ‘We can’t have too many women,’ meaning it will look unbelievable,” the showrunner, Phoebe Waller-Bridge, said in the same Variety piece. "I was like, ‘What the f*ck are you talking about?’ Not if it’s written well and shot well." Another way that the show disregards some stereotypical tropes is that both main characters in the books are white — as an actress of Asian descent, Oh said that endeared her to the role. "It’s about f*cking time," the actress said. "The character is not Asian, but there are a billion examples of the reverse where the source material or the character in the book was one ethnicity or another, and no one blinks an eye."

Oh also said that Jennings was happy with her as a choice to play the titular character, and with the overall tone of the show, which she says is quite different from the books. “I was also so pleased when Luke actually came on board with my casting as well,” she said at a panel, according to Deadline. “Because when you choose your family, it might not be what you’re reading in the novella.”

The actor told Entertainment Weekly that her character is a regular woman — she's thrust into incredible circumstances throughout the show, but it's always grounded in some kind of reality. "She doesn’t immediately turn into someone who knows martial arts and is Jason Bourne. That’s what I freaking love about it. So any action or peril, you’ll see her do it as a normal person would — so there’s a lot of screaming and running," she said. "I like that part because it’s very, very real and I think definitely grounded in the character. But you also see Eve definitely rise to the occasion."

Though Killing Eve doesn't have a true story of intelligence operatives and assassins to draw from, the show already has shown that it's not afraid to tweak its source material to make itself unique. If the comments from its stars and showrunners are any indication, this thriller could break the mold of female-fronted crime television.