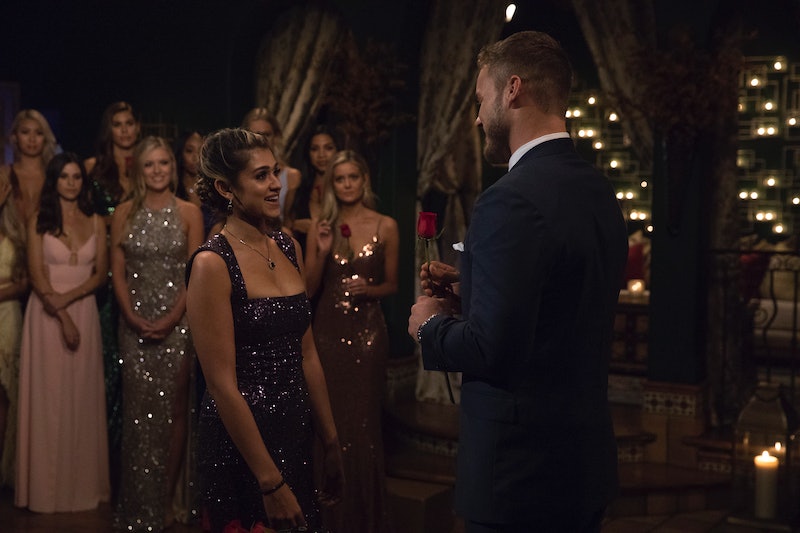 In Week 6 of The Bachelor, Kirpa finally got her one-on-one with Colton. And after Sydney's shocking exit, the former football player got a much-needed wakeup call and began questioning whether everyone there was ready for marriage. It's a valid question, since the entire premise of the show is to get engaged! So while the jury's still out on some participants' commitment level, it seems like the dental hygienist is ready for her close-up with Colton. And although it's still too soon to tell who he's chosen to marry, we can always speculate as to whether Kirpa is single after The Bachelor.

During their date, the couple went out on the water in a boat, dove for sea urchins, and had an overdue heart-to-heart. Kirpa was finally able to clear the air about her past relationship: She was engaged before, she shared, and her ex- fiancé was a virgin, too, so she understood where Colton was coming from. And although she and her fiancé ultimately broke it off, it seems like there was no love lost between them.

As a result of that experience, Kirpa also told the former football player that she wouldn't get engaged again unless she knew it was the right decision. When Colton asked whether she was ready to dive into a serious relationship with him, she said yes. So audiences know that if he were to choose her, she wouldn't take The Final Rose lightly.

So what has Kirpa been up to since they wrapped up filming the reality show? While she's not too active on Instagram, she has posted about the show and joked about the bandaid on her chin, which fans were speculating about after Week 6 aired. The mystery was solved when Kirpa divulged in a Bachelor deleted scene that she slipped and fell while taking a photo in Thailand.

And although she's been posting glamour shots and the occasional Bachelor teaser, it's unclear if she's been seeing anyone since the show ended. That said, the California girl's been staying busy. Kirpa took a trip to the Big Apple in late January, where she ate some pizza (you have to), took in some basketball at Madison Square Garden, and made an appearance at the Belfry in Manhattan.

What's more, Kirpa returned to Thailand in November and visited an elephant sanctuary, where it looks like she had a magical time. "[S]o grateful for all the new adventures this year brought and excited for the many more ahead," she wrote in a post. "[A]lso very grateful to be able to travel to the other side of the world with one of my best friends and spend thanksgiving with some amazing creatures and people."

But it's unclear if there was anyone else on these outings with her — namely, a certain gentleman. That said, audiences will know soon enough whether Kirpa made it to the final two, as Tayshia predicted during Week 6. And although the dental hygienist hasn't gotten as much face time with Colton as the other women in the house, that all could change. But if not, it seems like she's bounced back nicely.

And since Kirpa thinks Denver, Colorado, is "the most romantic city in the US," per her ABC bio, she's in luck for Week 7. But whether or not she ends up with Colton, it seems like she's having fun on The Bachelor and is able to poke fun at herself, which is a good attitude to have. But in the future, hopefully Kirpa will stay away from any slippery rocks, because those stitches looked brutal.