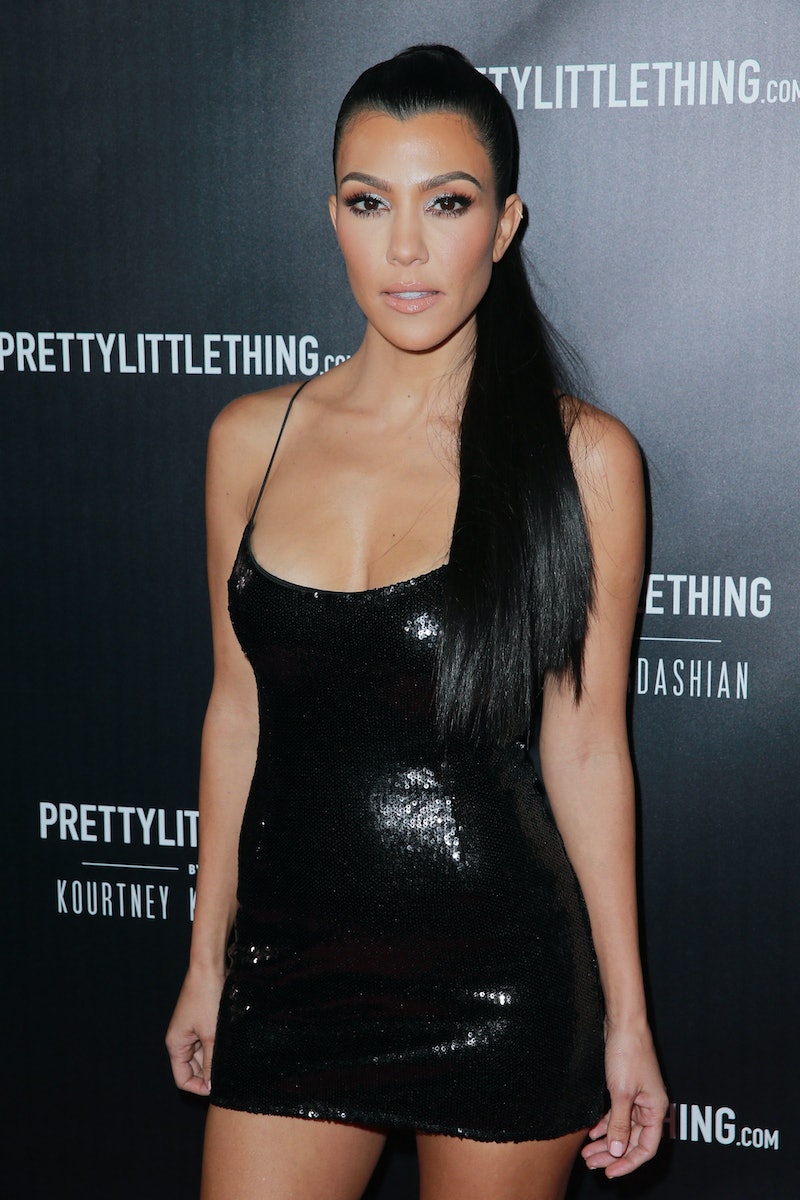 Most recent Kardashian headlines involve the slew of sisters who are reportedly expecting children. Kim hired a surrogate for her third child, while Khloe and Kylie are each allegedly pregnant with their first children. Now, all pressure has been on Kourtney to keep up with these Kardashians — and she's holding her own by chopping off her signature long, black locks.

The eldest Kardashian recently cut her hair in favor of a shoulder-skimming lob. The lob is certainly a bold style move and a drastic change, especially since Kourtney is the least trend-driven of all of her sisters. But the look might also be the source of hair inspo that causes you to make a beeline for your stylist's chair.

The mother of three has essentially rocked the same flowing locks for as long as she has been famous. Her youngest sis Kylie has often swapped out her color and cut with a rainbow of wigs, while Kim and Khloe have lightened their locks many times through the years.

But Kourtney, like Kendall, has nixed adventurous colors in favor of the lovely and familiar raven-hued hair in abundant, straight length — until now.

Sure, Kourt has gone with a little texture and beachy waves here and there. But her signature style, which suits her, was clearly something she was comfortable with. It's like her momager Kris Jenner continuing to rock that pixie she's known for. If it ain't broke, why fix it, right?

Well, Kourt's new coif totally slays. She posted an Instagram mirror selfie, showing off her 'do white crop top and low-slung jeans, without so much as acknowledging her new cut in the caption. Her fresh lob is perfectly messy, and the style is thicker, full, and bouncier. The cut calls attention to her face shape and features, and it's serving some serious Kim K. vibes.

Here's the reality star's most recognizable hair look — really long, really thick, and really dark. The high and tight, slicked back pony is a go-to in the Kardashian koif playbook. But here's to hoping theKardashian keeps her lob and styles it in a bunch of new ways, rather than immediately adding extensions to restore length.

Kris' first born definitely likes to rock some bedhead waves. She is doing the same thing with her shoulder-length strands. It's such a versatile 'do for girls on the go. You can wash it, rake a texturizer or sea salt spray through the ends, and let it air dry. The end result is mega glam with minimal effort and just a touch of product.

Who knew Kourtney would be ditching that iconic pony for a blunt lob when she shared this shot from her collab with Pretty Little Thing a few weeks ago?

ICYMI, the Kourtney x PLT collection is loaded with girls' night out, body con frocks. If you plan to hit the club anytime soon, there are plenty of options in the range, including tons of LBDs that are insanely sexy. There's even a velvet jumpsuit for a little adventure.

The one constant in the collection is that any of these outfits will look awesome when paired with either a messy or sleeky styled lob. Thanks Kourt for all the style inspo.