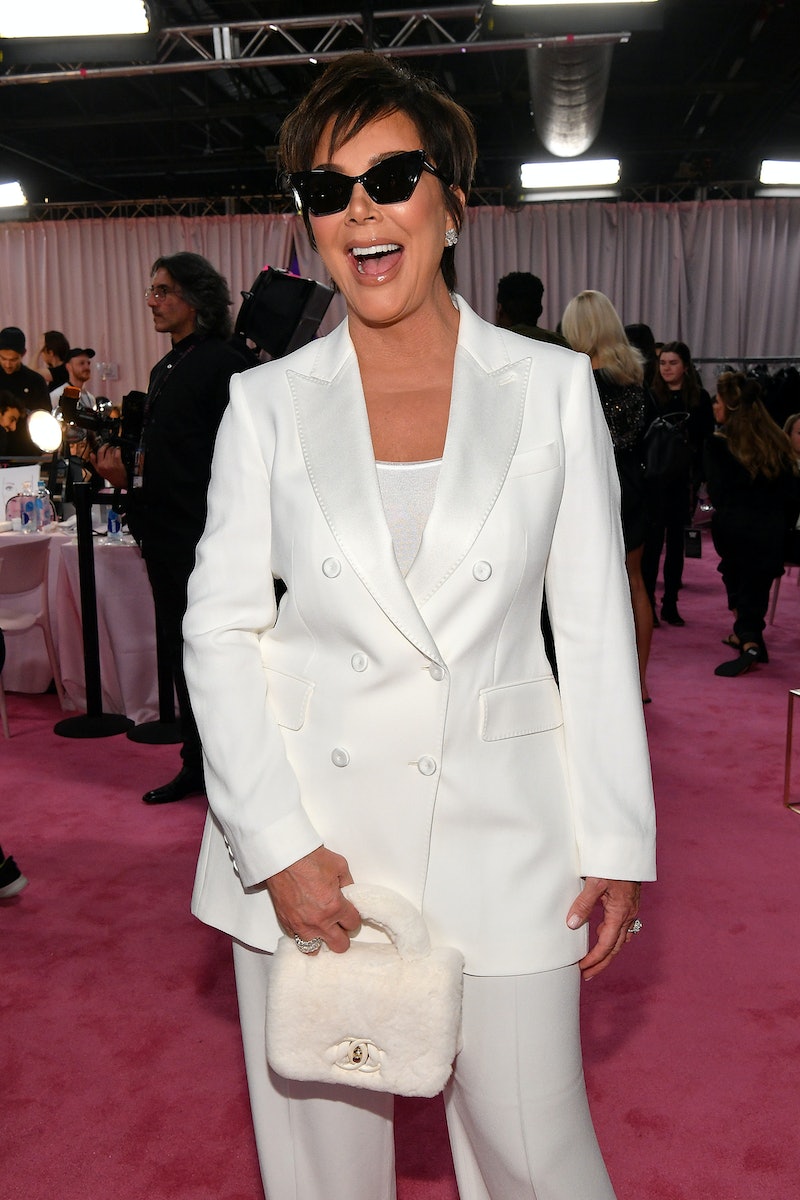 When it comes to the KarJenners, the daughters have often donned bold hair styles. The family’s momager Kris Jenner, however, always surprises when she switches from her usual short cut. Kris Jenner got a bob with bangs, and she looks like a completely different person.

The new hairstyle is similar to the one Jenner rocked in season one of Keeping Up With the Kardashians, when she wore a short, wavy look. Jenner’s bob hair style in 2019 is just a longer (and wavier) version. The star posed for a photo posted by makeup artist Ash K Holm. The makeup artist posted Jenners new 'do to her Instagram Story wearing a neck-length wavy bob with a set of choppy bangs. Not to mention, Jenner wore a bomb outfit to debut the new hair look. Holm attributed the beautiful new short cut to Jenner’s longtime hairstylist Jorge Serrano by tagging him in the story.

“Today with the queen,” Holm captioned the story, including a crown emoji.

Holm did up Jenner’s face with a glowing look. Jenner sported her classic black eyeliner, a smoky eye, and rosy cheeks. The reality television mom also opted for a nude lip, a favorite lip shade the women in KarJenner family wear often.

While this isn’t the first time Jenner switched up her look, it’s definitely one of the more dramatic looks fans have seen.

The KarJenner matriarch hasn't posted the short wavy 'do to her personal Instagram page yet, so it hasn't been confirmed if it's a new addition to her wig collection. Regardless, it's a cute short look that's new to fans.

Jenner is one of many celebrities to sport the bob-and-bangs look as it's been popular with a lot of celebrities in 2019. Actors Constance Wu's and Lana Candor are just two stars who have donned the short hairstyle already in 2019.

Among all the KarJenner women, Jenner is the businesswoman in the family who rocks a short look most often.

Despite the fact that Jenner has sought out Serrano for her short looks, this bob and bangs look is a new creation fans haven't seen before. The unfamiliar, yet beautiful bob-and-bangs look isn't the first time Jenner has strayed from her usual short hair style.

In January, Jenner shook up her personal Instagram page to post a posted a photo of herself wearing a brown '60s updo with another set of choppy bangs.

Jenner tagged one of the family's other hair stylists, Andrew Fitzsimmons, as the creator of the '60s throwback look.

In February 2018, Jenner posted a selfie with her daughter Kim and Jenner was styled in a white blond wig. The mother of six looked like a clone of Kim, who also wore the same white blond hair color.

The mother and daughter duo even donned the same pair of icy blue contacts to tap even further into their "twinergy".

Regardless of if Jenner's bob and bangs are real or a wig, it's something bold and different.