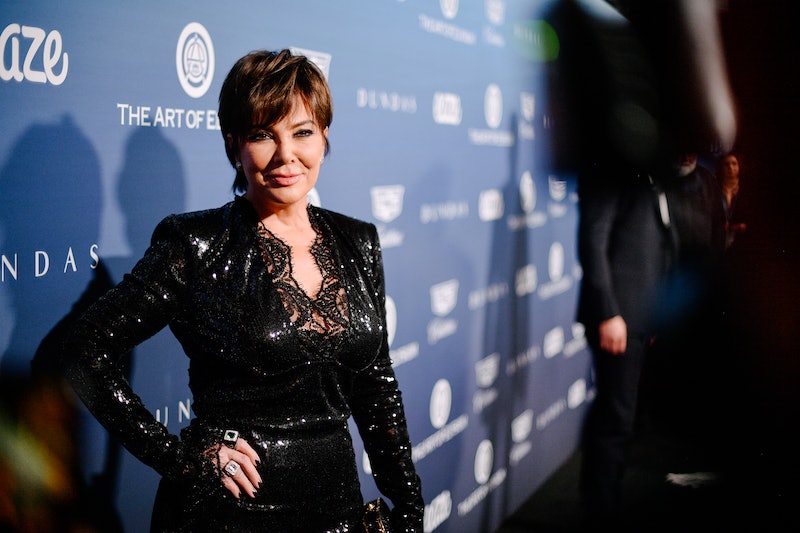 It's no secret that the Kardashian-Jenner family has a great sense of style, but it's probably due to the fact that the famous fam is led by one fierce and trendy momager. Kris Jenner literally wore a bun and bangs for her Sunday best — and she looks like a completely different person. If there were any doubt where Kim gets her looks, rest assured it's all from because the two could totally pass for twins.

The fearless leader of the KarJenner clan posted to Instagram to display a high updo bun and a set of messy bangs that transformed her into one of her daughters. She coupled the unrecognizable hairstyle with a sheer mesh white turtleneck top, making her appear to be the long lost sister of the family.

She captioned the photo with a simple "Today’s Sunday glam," crediting celebrity hair stylist Andrew Fitzsimons as the culprit for her '60s styled locks and Etienne Ortega for her killer face beat.

Despite the fact that Kris may be the family momager, making moves behind the scenes and collecting her 10%, her looks are the ones that have fans gagging the most. However, that isn't to say her short iconic Kris cut won't forever remain in our hearts.

You'll have to do a double take because the cheekbones, smoky eyed smize, and overall nude color palette will have you thinking it was Kim who chopped off all her hair for this '60s look.

Kris has been known to derive style changes from her daughters and stray from her standard short deep brown hair from time to time.

Back in February of last year, Kris took the world for a spin posting a photo of her and Kim side by side, both sporting blond hair. Funnily enough, Kris' new blond look became part of the KKW Beauty concealer campaign with Kim and MJ donning matching iced out hair.

"I've really wanted to go blond for so long, but the process is really grueling on your hair, so I thought I'd try a wig first," she revealed on an episode of Keeping Up With the Kardashians.

On the show, Kim mentioned that her mom looked something like Miranda Priestly from The Devil Wears Prada, and Kris has hardly let anyone forget who's the real boss lady in fashion.

Even during the Kardashian Christmas party, Kris pulled up in a blond version of her signature cut with an icy silver dress to complete the look fit for a winter wonderland.

While Kardashian-Jenner fans may love Kris' new look, it's also worth mentioning that her short hair is still an inspiring hair style to her daughters.

Last year, Kylie took to her Instagram stories to change up her own look and pay respect to her mom's fashion sense. The youngest Jenner posed in a short dark wig identical to Kris' iconic hair and posted a snapshot of the two of them on chatting it up on FaceTime.

Kris' updo is one that would make anyone stop and stare at her uncanny resemblance to Kim, but any true KarJenner fan knows that the Kris Jenner bob will never fade entirely.