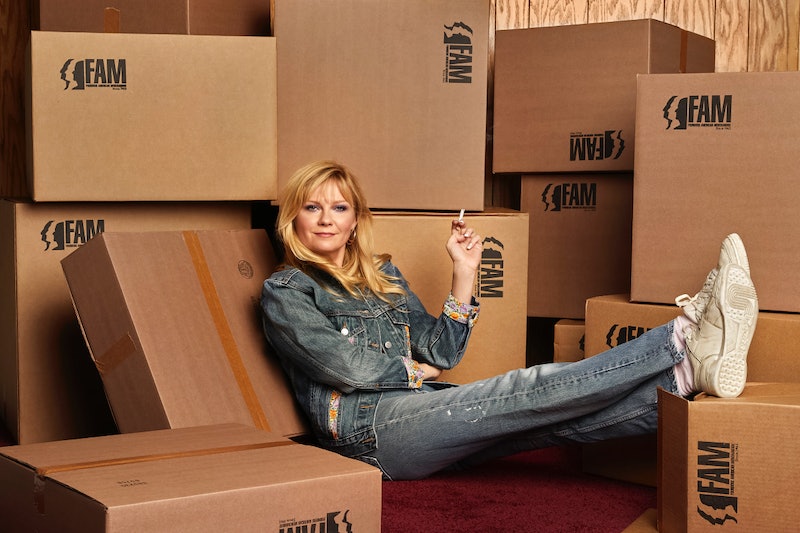 Drop Dead Gorgeous fans rejoice, because Kirsten Dunst is bringing that same unstoppable energy back to On Becoming a God in Central Florida — out Sunday, Aug. 25 on Showtime. Dunst plays Krystal — a new mom and minimum wage employee at a water park called Rebel Rapids, which is located outside Orlando. Her husband, Travis (Alexander Skarsgård), works as both an insurance salesman and a low-level distributor at the multi-level marketing company Founders American Merchandise (FAM). And while Krystal Stubbs isn't based on a real person, she seems thoroughly authentic, from her acid-washed denim all the way down to her braces.

"In Krystal [Stubbs], [co-creators Robert] Funke and [Matt] Lutsky have created a truly delicious, sometimes diabolical female character — a dirt poor, very fierce young woman who is relentless in her pursuit of the American dream inside of an Amway-like company," the late Suzanne Patmore Gibbs told Deadline in June 2018 before her death. In other words, the On Becoming a God in Central Florida creators wrote the character of Krystal, but what a character she is.

In an interview with the New York Post, Dunst said she watched Honey Boo Boo in order to prepare for the role. "You know what I mean?" the Melancholia actor said. "Just to get a little more free in that way. There's so much rage within Krystal that I feel like I don't always get to express in characters." Indeed, in an interview with Yahoo!, Dunst explains that the show premise is "about the inner rage of a woman who's swallowed too much sh*t." And it's clear that Krystal's not going to take it anymore.

Episode 1 of the Showtime series (which is now streaming on YouTube along with Episode 2) depicts an unfortunate incident that leaves Krystal on her own with a baby. And since working at Rebel Rapids isn't going to cover all the bills, Krystal decides to get back at FAM for manipulating her family.

And here's where the show's mouthful of a title comes in: She begins plotting to make it to the top of the skeezy pyramid scheme, thus toppling the whole thing to the ground. The character sounds like a bit of Peggy Blumquist from Fargo Season 2 mixed with Amber Atkins from Drop Dead Gorgeous. In short, fans are going to love Krystal.

And in order to sell all of the FAM products her husband left behind (the reason for which is revealed in Episode 1), Krystal must appear to buy in to the company ethos in order to peddle these MLM products. In the same Yahoo! piece, Dunst compared her character's sales tactics to that an Instagram influencer. "It's like the more followers you get, the more paid advertisements you get, the more money you make and all your followers are now buying the products you're selling," she explained to the site.

In other words, Krystal is now an influencer for FAM and must tout that lifestyle so that her friends and family with buy in to the MLM, hook, line, and sinker. One of the ways Krystal tries to brand herself is through offering water aerobics classes at Rebel Rapids, per Yahoo!, which she puts up billboards for.

"She gets people to come down and get inspired," Dunst told the site. "It's all about giving people hope, getting them inspired, and selling more products. So it's just bringing people, getting more people to buy more things. Like buying into her water class, buying products from her, just branding yourself — like Instagram."

Krystal may be fictional, but her business acumen is entirely convincing.