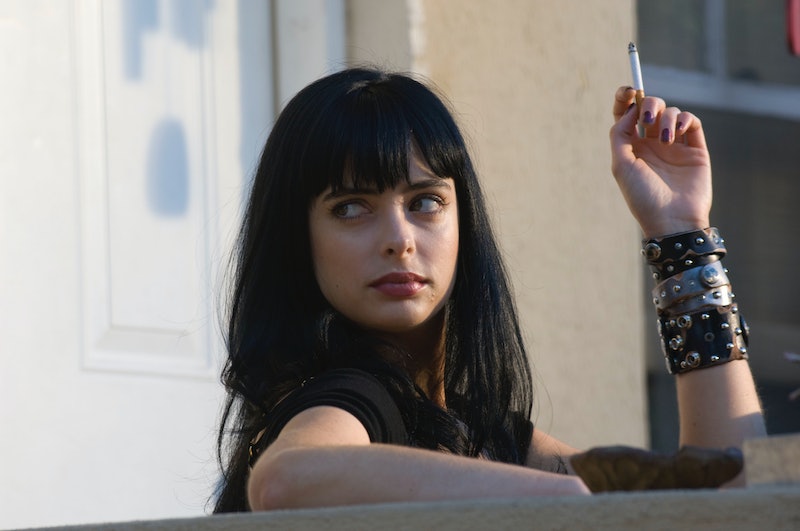 Despite her character's on-screen death in Season 2, fans aren't giving up hope that Krysten Ritter is in the Breaking Bad movie El Camino. Jesse Pinkman's (Aaron Paul) girlfriend Jane Margolis was left to die of a drug overdose by Walt, who hoped getting rid of her would put Jesse back under his control. But that doesn't mean she can't or won't appear in some capacity in the upcoming film sequel.

A video recap of the events of Breaking Bad released in support of El Camino shows Jane in a montage of memories flooding back to Jesse, who's on the run from police after escaping the Aryan Brotherhood in the AMC series' finale. This hint, along with an unverified report that claims Ritter will reprise her role, make it seem like there's a possibility Ritter could return, but there's no guarantee these aren't red herrings, either.

The IMDb page for El Camino doesn't name Ritter among the cast members, though given that only five actors do appear on the list, it's likely that many cameos are not yet listed on the page to preserve the surprise for fans. In fact, Breaking Bad creator and El Camino writer and director Vince Gilligan has revealed that 10 characters from the original series will make an appearance in the movie, so there's definitely a chance Ritter could be among them.

Ritter herself has been understandably silent on the topic. If she is indeed part of El Camino, she's likely under strict instructions not to let the cat out of the bag. Even Paul won't confirm or deny which familiar faces we might be seeing again, telling The New York Times simply, "All I can say, I think people will be really happy with what they see." Ritter also appeared at the red carpet premiere of El Camino, though she could simply have attended as an alumni of the show and not as a cast member.

It's not difficult to imagine how Ritter could be in El Camino, though. While the movie focuses on Jesse's journey after the events of Breaking Bad, the fact that he's being forced to lay low in an effort to avoid detection by law enforcement officials who are actively pursuing him in relation to Walt's death could mean he has plenty of time to reflect on the events of the past several years that led him to where he is now.

It only makes sense, then, that Jane would be part of that period of reflection. Jesse truly loved her, and while their relationship was dysfunctional, they were doing their best to build a future together. Her untimely and tragic death, while not explored at great length on the TV series, will have deeply affected Jesse, especially since it was completely avoidable.

Ritter could appear as Jane in flashback scenes, showing unseen moments in their relationship. She could even appear to Jesse as a vision, dispensing advice, condemning him, or just simply being there. In other words, there are plenty of ways to bring Jane (and Ritter) back in El Camino without undermining the events of Breaking Bad.

If and how fans — and Jesse — will be reunited with Jane remains to be seen. Luckily, El Camino: A Breaking Bad Movie will be released on Netflix and in select theaters on Friday, Oct. 11, so we don't have long to wait.