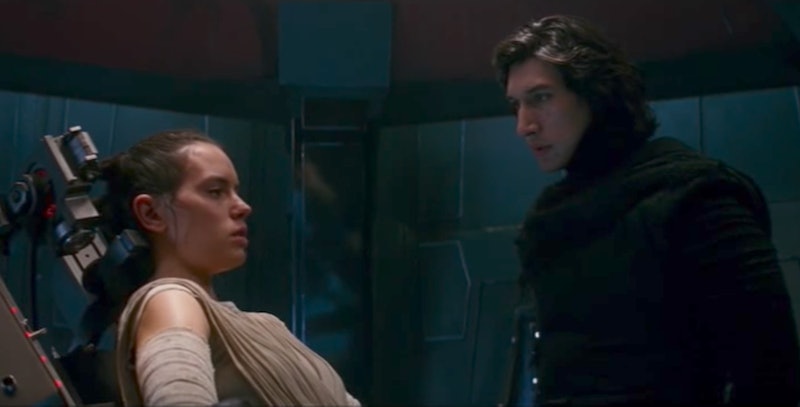 Spoilers ahead for Star Wars: The Last Jedi. The Last Jedi has officially been released, and now everyone running to the theater to see it is likely preparing to find out that who Rey's parents are. Sadly, that reveal doesn't happen, and the only real mentioning of it occurs when Kylo Ren tells Rey that her parents are nobodies that left her on Jakku. But is Kylo Ren lying to Rey about her parents? He most likely is, because there are just too many clues that Rey is a descendant of a lineage that's important to the Star Wars universe.

When Kylo Ren tells Rey that she will never know her parents because they don't matter and they forgot about her after leaving her on Jakku, she gets emotional — and who wouldn't? This is exactly what Ren wants, as he immediately begins proselytizing his vision of the future to her, which he would leave. It definitely seems like Kylo Ren is saying these cruel things about Rey's parents not caring about her as a form of manipulation, as he basically is trying to convince her to join the Dark Side because she has no family and needs him. The most ironic part of that, of course, is the fact that many Star Wars fans speculate that Rey and Kylo are somehow related.

The most popular fan theories about Rey's parentage is that she's either Luke or Leia's daughter — though not Han's — which would either make her Kylo Ren's cousin or half-sibling, and both of those options are totally plausible. The fact that Rey and Kylo's connection was such a big part of The Last Jedi supports the fact that the two have some relation, and it likely wouldn't surprise anyone to find out that they were in fact both partly Skywalkers. Not only are they connected, but Rey and Kylo Ren, or Ben Solo, have equal powers as well, which implies that they could have similar ancestry.

Kylo Ren's claims that Rey's parents left her behind on purpose and don't have any remarkable legacy could also be true. However, Rey has such a strong connection to the Force, that most people agree that her parents — or grandparents — were important figures. Even if Rey isn't Leia or Luke's daughter, she could still be Obi-Wan Kenobi's granddaughter, or even Sith Emperor Palpatine's granddaughter, which fans have theorized.

In order to know that Rey's parents most likely weren't "nobody," all you have to do is look back at Star Wars history. Rey's story mirrors Luke Skywalker's, and that turned out with Luke discovering that his sister was a princess and his father the Sith Lord. Rey also resembles Anakin Skywalker, whose innate talent in pod racing and natural connection with the Force led him to become a Jedi Knight, just as Rey's natural talents have led her to become one as well (though not officially). While Anakin's parents weren't necessarily important figures, he at least resembles Rey as the Chosen One enough to cause fans to believe they might be related.

Even if Rey doesn't have remarkable parents, she has remarkable powers, and The Last Jedi suggests that she alone will carry on the Jedi tradition. After Luke fights Kylo Ren, he says, "I will not be the last Jedi" before Rey completes the rescuing of the Resistance. Although some might feel disappointed that they didn't actually learn about who Rey's family is, that information will most like emerge in Episode IX, which comes out in December 2019. If two years sounds like an unbearable amount of time to go without knowing who Rey's parents are, you can pass the time by burying yourself in fan theories, of which there are plenty.