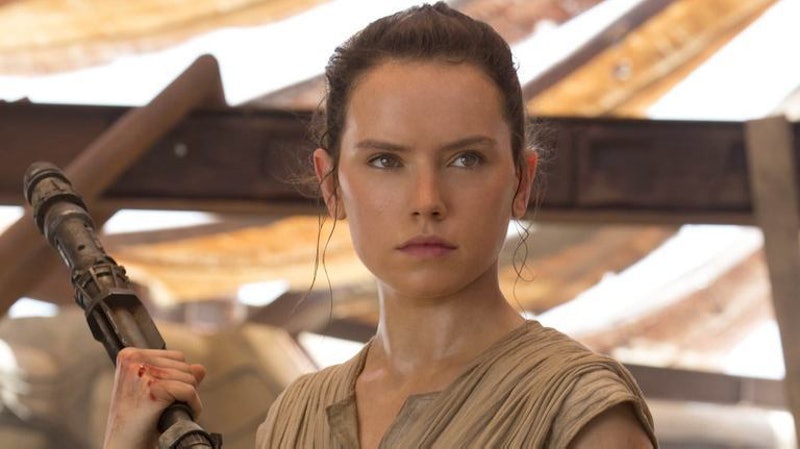 Star Wars: The Force Awakens did a lot of things amazingly well. Two of the most best things the film did were linking the stars of the original trilogy to the new cast in ways that felt natural and interesting, like revealing Kylo Ren as the son of Han Solo and Leia Organa; and also the casting of Daisy Ridley as the main protagonist, Rey, finally giving the Star Wars universe a strong female hero who takes a backseat to no one. Now, many fans are theorizing that these two aspects are more intrinsically linked than was revealed in the film, with speculation that Rey's parents have a lineage dating back to the original trilogy. And while a lot of the theories put forth so far indicate that Rey is the daughter of Luke Skywalker, another idea that's gaining traction suggests that Luke is not Rey's father, and that she is instead the granddaughter of Obi-Wan Kenobi. So, is Rey a Kenobi?

One big motivator for the Obi-Wan Kenobi theory has to do with the idea that Luke being Rey's father is too obvious. There are clues throughout the film that pretty much spell out this being the case, so it seems likely that it's all misdirection leading to a reveal with the potential to shock like Darth Vader's "I am your father" moment did.

But other than that, there does seem to be some actual evidence that suggests Rey is of the Kenobi line, with the strongest piece being the way she speaks. Rey speaks with a British accent in The Force Awakens, which probably doesn't seem like a big deal since Daisy Ridley is British. But John Boyega, who plays Finn, is also British, yet he uses an American accent in the film. So that seems to indicate that the accents they're using are deliberate rather than natural. But why would Rey, who grew up a scavenger orphan on a backwoods planet, be told to speak with a regal British accent? It could be to link her to the only other good, human character in the Star Wars films to use the Queen's tongue: Obi-Wan Kenobi.

Further evidence can be found in the scene where Rey first touches Luke's old lightsaber and has her visions. Although it's tempting to think that Rey has the vision because of a familial link to the Skywalkers, it's Kenobi's voice that she hears most prominently during it. The voice, which was recorded by Ewan McGregor with a sample from the late Alec Guinness mixed in, says to her, "Rey, these are your first steps." If she's going to hear from a ghost in this scene, then shouldn't it have Anakin if she were a Skywalker?

Finally, in what could be a superficial similarity between the characters, there's the fact that Rey seems most proficient in the power of the "Jedi mind trick", whereas Luke seemed to be more skilled at using the Force to move objects. Obi-Wan was also a fan of the mind trick, so it could just be a coincidence or it could be that Kenobis are just naturally good at telling people what to do.

Regardless of whether Rey is a Kenobi or not will likely be revealed in Episode VIII. Given how closely The Force Awakens mirrors A New Hope, it would make sense for the father reveal to come in its sequel, just like the Vader/Skywalker connection in The Empire Strikes Back. So until then, let the wild speculation about Rey continue!