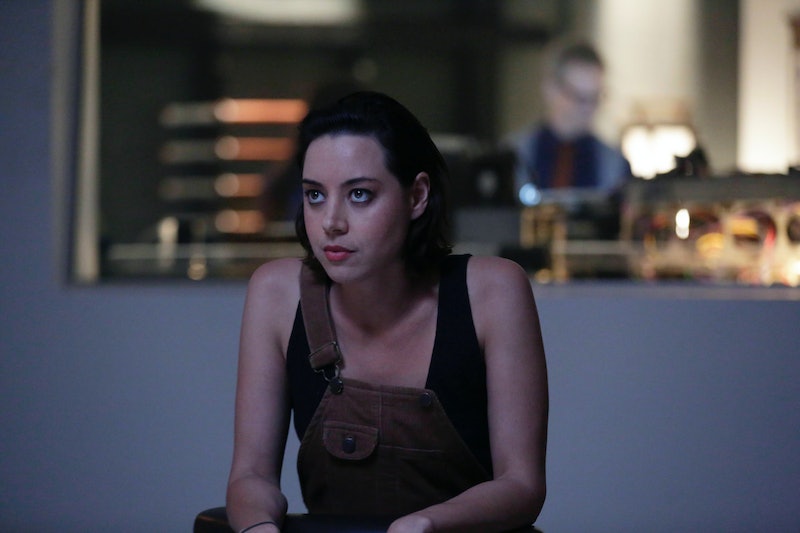 Following Aubrey Plaza's character on Legion has been a bit of an emotional roller coaster. First, she was killed in the first episode just after being introduced. Four episodes in, it turns out that she might not even be real — David's old girlfriend insists that his addict friend was a man named Benny instead. Plus, she became one of the voices in David's head, and I'm now starting to think that Lenny is the Devil with the Yellow Eyes on Legion.

Did anyone else catch that tiny moment at the end of the episode? When Lenny creeped over David's shoulder in the final shot, her hands looked pale and bulbous at first, almost as if she and that creepy monster were the same. Is Lenny some kind of human manifestation of this being? Does she not actually exist in the real world. If so, who the heck is Benny? It's definitely possible that she is the nice, friendly human version of the vision that David keeps seeing? Maybe he didn't make her up or change her gender in his mind, as the episode suggested. Maybe she's been in his head all along.

It's difficult to tell what's real and what isn't on Legion. The show is still playing it coy about the exact perimeters of David's powers as well, and what all of these screaming people in his brain mean. Add that to the secret organizations and apparent conspiracies lurking around every corner as well, and you can't trust anyone or anything you see.

Lenny could also be a mutant herself that has somehow cheated death and infiltrated David's mind. The Devil could be disguising him or herself as David's old pal. There are a lot of different possibilities, but that moment in Episode 4 was particularly ominous. Real or not, that wasn't the fun Lenny we know. Shoulder-creeping Lenny was into violence and chaos. She seemed happy that Kerry was shot. She almost looked proud for helping to make it happen. This Lenny is definitely up to no good, whereas the Lenny that we know from the flashbacks has pretty well-intentioned motives. This Lenny is not a friend. Whatever is going on, yellow-eyed devil or not, is putting everyone in danger. The revelations about David's flawed memories, and he way Lenny took control suggest that more is going on with this vision that meets the eye and is part of the bigger mystery on Legion.