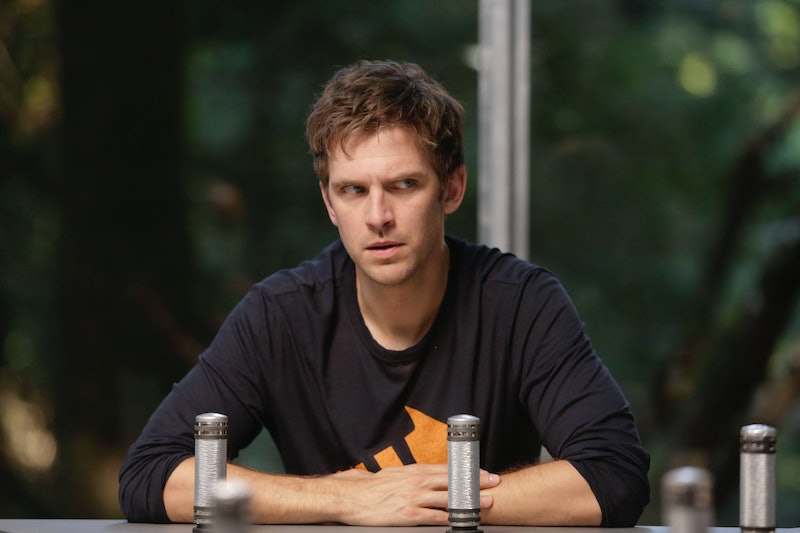 From its trippy visuals to its labyrinthine plot, it's clear that Legion delights in confounding its audience. But one of the biggest — and most unsettling — mysteries of the show is the identity of the creature referred to on Legion as The Devil With The Yellow Eyes. Theories abound as to the true nature of this grotesque, shadowy monster that haunts the periphery of David Haller's dreams… but only two episodes in, we have very little actually information to go on. (Other than that he's absolutely terrifying to look at, of course.) But that won't stop us from speculating, will it?

Fans have already been hard at work trying to divine the true nature of Legion's shadowy villain, working off visual cues from the show itself as well as their knowledge of the source material on which creator Noah Hawley (Fargo) based his series. And miraculously, given how little we know about the Devil, they've already come up with a few tantalizing possibilities. While it's definitely still possible that the nefarious figure will end up being just another piece of David's fractured psyche, or an original character created by Hawley himself, it seems equally likely that the creatures has its origins in Marvel Comics.

Here are the three suspects that fans have generally agreed upon:

Perhaps the most widely accepted theory among fans at the moment is that The Devil With The Yellow Eyes is Legion's version of the Shadow King, a villain from the X-Men comics who is perhaps Professor X's second most iconic villain after only Magneto. On the page, the Shadow King is a multidimensional being who was brought into existence by the very first nightmare, and has existed ever since to feed on the fears of his victims. Like the Devil, he is constantly lurking in the background, waiting to pounce on his victims when they're at their most vulnerable.

Movie Pilot points out that the Shadow King even has a history with David Haller specifically in the comics. They interacted in the storyline called "The Muir Island Saga," in which the Shadow King possessed David's mind so he could use the mutant's powers against his father, Professor X. He was only stopped when Psylocke drove a psychic blade into David's brain,

While the Shadow King theory is based primarily on the Devil's yellow eyes and his menacing tendancy to lurk in the shadows, then this theory is based on the physical resemblance between the Devil and the X-Men villain known as Mojo, a member of the Spineless Ones from the planet Mojoverse. Like the Devil, he is depicted as grotesquely large with jaundiced skin. Although Mojo and David never cross paths in the comics, that doesn't mean Hawley couldn't be incorporating this villain into his series.

Comicbook.com is one champion of this theory, pointing out that Mojo derives his power from television; the citizens of Mojoverse are obsessed with reality TV, and the villain captures mutants to pit them against each other for his people's entertainment. The higher his ratings get, the more powerful he becomes. While that might sound far-fetched, using a TV-powered villain on a TV show would provide a lot of commentary on the medium itself, and the revelation that David is existing in a parallel dimension where he's fighting for his life for an audience's entertainment — our entertainment — would be very meta.

This possibility may not be as popular among the show's fans as either of the first two, but ironically it also seems the most likely. In one fell swoop, it manages to combine the theory that the Devil is a character from the comics with the theory that the Devil is just another part of David's split personality. In the comics, the Fiend, aka Professor Y, is a manifestation of David's fractured psyche that comes into existence after the character is traumatized by the death of his father, Charles Xavier.

As IGN describes Professor Y, "He's not a real character, but rather a particularly powerful and dangerous offshoot of David's mind. He's nothing more or less than a psychic demon that follows him wherever he goes, waiting to wreak havoc on his life." That sounds eerily similar to what we know of the Devil so far, doesn't it? If you're not convinced yet, consider the one primary difference that distinguishes the real Professor X from David's manifestation of Professor Y: he has yellow skin and yellow eyes.

Although Charles Xavier has yet to be mentioned on Legion — and it's not even clear whether the show's version of David Haller is even Professor X's son or not — it still seems likely that The Devil With The Yellow Eyes is a figment of David's imagination that was conjured due to some past trauma in his life, perhaps the death of his father (whether Professor X or not), or some other tragedy that Hawley invented for the show.

Hopefully Hawley won't keep us waiting long, and Legion will reveal the true identity of The Devil With The Yellow Eyes soon.

More like this
Everything To Know About 'Evil' Season 4
By Meguire Hennes
Does 'Locke & Key’s Ending Mean There Could Be A Season 4?
By Sophia Moore
Netflix Just Rebooted A Classic ‘90s High School Drama
By Maxine Harrison
'Better Call Saul’s Co-Creator Explained Jimmy & Kim’s “Happy Ending” In The Finale
By Brad Witter
Get Even More From Bustle — Sign Up For The Newsletter