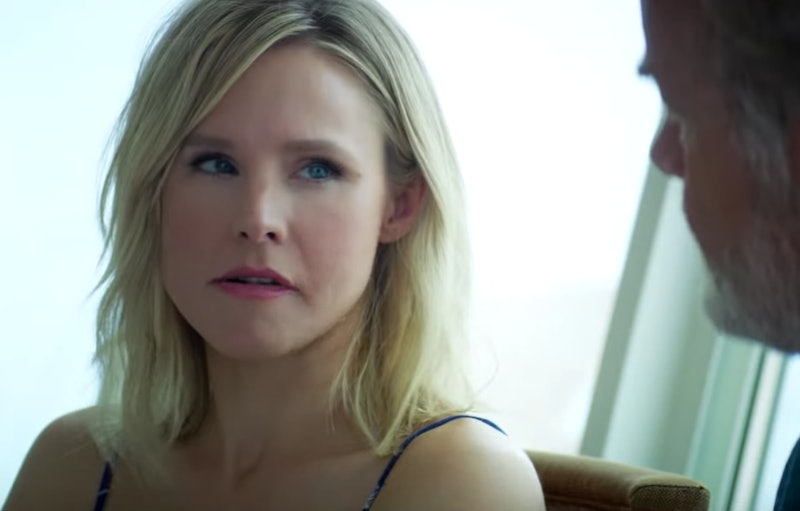 The latest Netflix Original Movie that you won't want to miss stars Kristen Bell and Kelsey Grammar as a father/daughter duo trapped together on a cruise ship. The two try to fix their strained relationship after Bell's character gets left at the alter and she ends up going on her honeymoon with... her dad. As Seth Rogen, a fellow cruiser, says in the trailer, "that's f**ked up." But let's face it, it's not the most unrealistic movie premise out there, so is Like Father based on a true story?

Fortunately, it's not — well, most likely. The Netflix movie, which drops on Aug. 3, was written and directed by Lauren Miller Rogen. And as hilarious as Miller Rogen's life probably is (after all, she's married to Seth), it sounds much different from the story of Like Father. Miller Rogen wasn't ever an over-worked executive like Bell's character, Rachel, because after college she moved to Los Angeles to become a screenwriter and actor. Then, she married Seth in 2011 — without getting ditched at the alter — and it seems like Miller Rogen has a great relationship with her father, considering she frequently praises him on social media.

Even though Miller Rogen has a far different relationship with her father in real life than her movie's protagonist does, the screenwriter is often outspoken about a different parental relationship in her life. In an essay penned for Cosmopolitan in 2016, she opened up about her mother's diagnosis of early-onset Alzheimer's disease. In the piece, Miller Rogen not only speaks to the tragic effects of the neurodegenerative disease but also describes her father's dedication to caring for her mother. "It was very important to my dad to keep my mom at home and he wanted to keep her close to him, so they live in a duplex," she wrote.

The filmmaker always been an outspoken activist in the efforts to raise awareness about and hopefully eventually cure Alzheimer's disease. In 2012, Miller Rogen and Rogen founded a charity, aptly called Hilarity for Charity, to help raise money for Alzheimer's care while reaching younger generations to raise awareness. On the charity's site, Miller Rogen wrote, "The only way to change that scary statistic is to act now. Raise money, raise awareness, write congress, volunteer in a nursing home. There’s much to be done and there is no reason that we can’t make a difference."

You can tell from her work with the charity and her interviews that Miller Rogen has a special, close bond with her family, so it isn't too surprising that her feature film directorial debut is for a movie that focuses on a father-daughter relationship. Also unsurprisingly, Like Father is really funny, despite taking on some difficult topics. Clearly, Miller Rogen knows a thing or two about using humor to deal with life's hardest parts.

So as funny as it would be if a person actually ended up on their honeymoon with their estranged father instead of their new spouse, Like Father is likely 100 percent fiction — but will hit home for anyone who enjoys lightening up the mood with much-needed humor when things get hard.

More like this
Lisa Marie Presley Reviewed Baz Luhrmann’s ‘Elvis’ Movie On Twitter
By Grace Wehniainen
Where Is Dr. Cline Now?
By Morgan Leigh Davies
What’s New On Netflix: A Victoria Justice Rom-Com & The Return Of David Letterman
By Arya Roshanian
Sadly, 'Fantastic Beasts: The Secrets Of Dumbledore' Isn’t Streaming — Yet
By Arya Roshanian
Get Even More From Bustle — Sign Up For The Newsletter