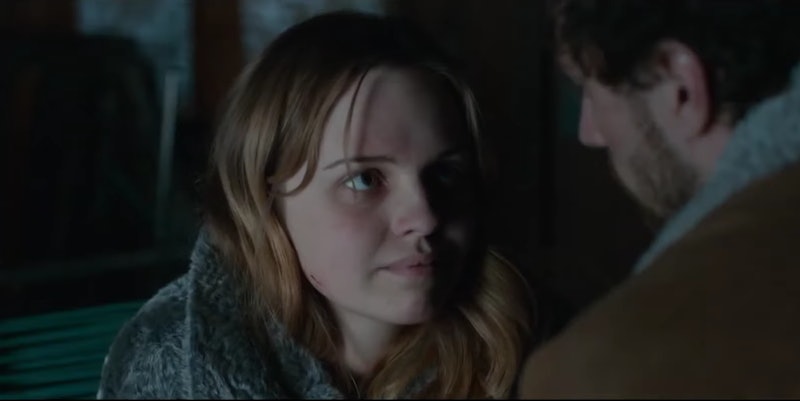 A Million Little Pieces is the film adaptation of the harrowing and controversial story of James Frey's journey through addiction and rehab. Forced by his family to go to the Minnesota recovery facility Hazelden, James (Aaron Taylor-Johnson) meets Lilly (Odessa Young), a young woman also in recovery. Despite strict rules forbidding fraternizing, James and Lilly fall in love. Though she plays an essential part in James' rehab and recovery, it's unclear if the Lilly in A Million Little Pieces is actually based on a real person, and that question is central to the controversy surrounding Frey's memoir from more than a decade ago.

The film adaptation remains faithful to the book's version of events, in which James meets the 22 year-old Lilly in rehab. Originally from Phoenix, Lilly had been on the streets selling her body since age 13, and was addicted to crack and heroin. James describes her as "tall and thin and long and blond like the thickest silk." In recovery James falls in love with her, and the two sneak off to the woods to spend time together in defiance of Hazelden rules. When they're caught, Lilly runs away, but James rescues her from a crack house. Unfortunately, when Lilly needs him most — spiraling out of control after her grandmother dies — James is stuck in jail. He gets out and rushes to join her, only to find out that Lilly hung herself a few hours prior.

It's a compelling story, so much so that when Frey's version of events came into question after the Oprah's Book Club pick had its "truths" torn to shreds by The Smoking Gun in 2006, the possibility that Lilly's existence was fabricated was one of the first questions an irate Oprah asks Frey.

Though James insists there "absolutely" was a Lilly, when Oprah pushes him on details, he admits he altered the details of her death, as well as the dramatic timing of him just missing rescuing her again. The Freakonomics blog had undertaken a thorough investigation of Frey's initial claim, and while they found a woman who might match Lilly's description who died by hanging, other facts did not align. When t] new news of her death came to light, Freakonomics resumed research and concluded, "There is no record in the mortality detail files [...] in Chicago around this time period that even remotely fits his description."

Lilly is an awfully convenient figure for a story: an object of romantic obsession who helps James through recovery and provides a dramatic post-rehab moment that nearly derails him. With both Lilly and her grandmother gone and rehab records private, the only word we have to go on about Lilly is from James himself. Given his compounded and repeated lies about his own life, that's very shaky ground indeed.

More like this
Your Guide To Watching 'Everything Everywhere All At Once' In The UK
By El Hunt and Sophie McEvoy
Vanessa Hudgens Is Reportedly Engaged To Cole Tucker
By Jake Viswanath
Alicia Silverstone Revives Her 'Clueless' Character In This Super Bowl Commercial
By Jake Viswanath
How Andrea Riseborough Got Nominated — & Almost Disqualified For An Oscar
By Jake Viswanath
Get Even More From Bustle — Sign Up For The Newsletter
From hair trends to relationship advice, our daily newsletter has everything you need to sound like a person who’s on TikTok, even if you aren’t.