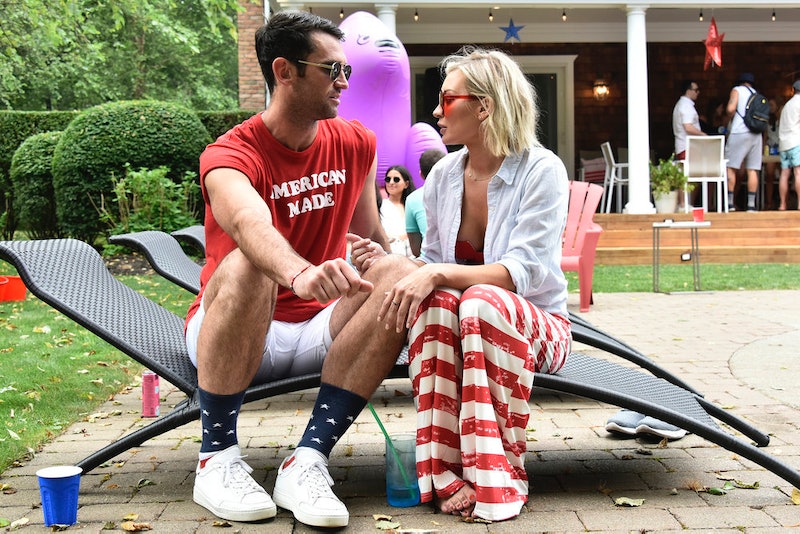 Although Lindsay Hubbard and Carl Radke hooked up (and then quickly broke up) on Summer House Season 4, now it seems like Lindsay is dating Stephen Traversie. Her new love interest is a Senior Director of Marketing at Tao Group Hospitality, according to his Instagram bio.

In addition to hanging out with Lindsay, Traversie plays soccer, runs marathons, travels, and spends time outdoors (when he's not in NYC, that is, where he moved last January). Traversie is also a Stage 3 cancer survivor and received his diagnosis back in 2013, according to an Instagram post. He has been in remission for almost six years and is giving back by running the 2020 New York Marathon to raise funds for cancer research through Memorial Sloan Kettering.

While it's unclear how long they've been dating, their first Instagram photo together appears to be on June 20, 2019, when Lindsay, Carl, Traversie, and a few others had a Swedish Midsommar-themed dinner at one of Traversie's restaurants, TAO downtown. On Aug. 15, he then attended Lindsay's birthday party, and on September 7, they took a helicopter ride above NYC. The pair even took a romantic getaway to Positano and Rome last September.

Luckily, it doesn't seem like there's any bad blood between Lindsay and Carl: On March 5, she took to Instagram to address the dating rumors. "Shortly before filming this past summer, Carl and I wound up single at the same time," she began. "It was then that he decided to shoot his shot.... You have seen this all play out on the last 5 episodes of #SummerHouse But there is no rule book written on how to go from best friends to then being romantic and then back to friends again."

The Summer House reality star continued, saying, "Unfortunately going into it, Carl didn't exactly understand that I'm not dating just to date at this point in my life (even if he is my best friend), or that he wasn't quite ready for the level of commitment I need in a relationship. Our expectations were not aligned, which is where it all went wrong."

Now, however, it seems like all three of them are comfortable hanging out together. Last October, Lindsay, Carl, and Traversie even took a photo sitting on each other's laps. "Christmas Card SZN - DM if you want one," Traversie captioned the Instagram.

As always, it looks like Lindsay made the right choice — even if it took some pool parties at the Summer House to help her out.

More like this
Kanye West Apologizes To Kim K "For Any Stress I Have Caused" In Rare Interview
By Jake Viswanath
Kendall Jenner Thinks Tristan Thompson "Wanted To Trap" Khloé With Another Baby
By Jake Viswanath
Clayton & Susie Broke Up, Citing "A Significant Amount Of Pain" After 'The Bachelor'
By Jordyn Tilchen
‘The Ultimatum: Queer Love’ Is Officially On The Way
By Radhika Menon and Kadin Burnett
Get Even More From Bustle — Sign Up For The Newsletter