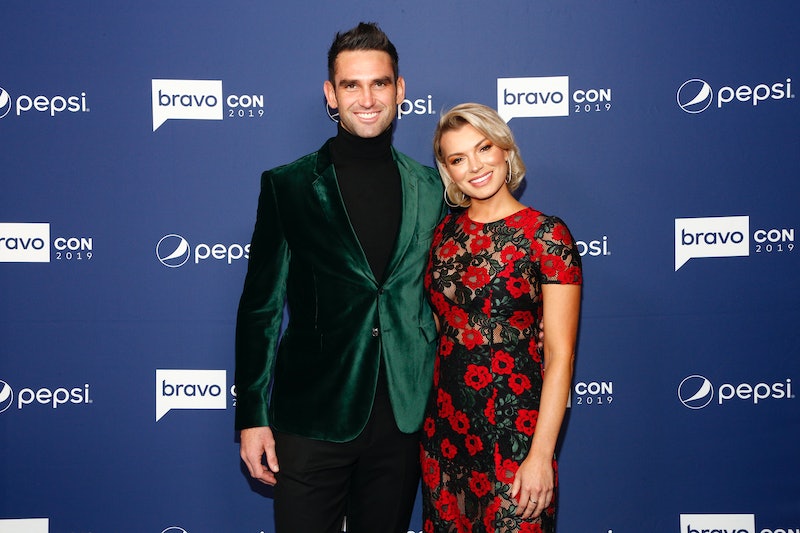 Viewers and the Summer House cast were all shocked to hear that Lindsay Hubbard and Carl Radke hooked up on the Season 4 premiere last week. After Carl tells Kyle Cooke that he fingered Lindsay, the entire house knows withand Lindsay hooked up when they shared a bed. It looks like a lot of the season will revolve around their relationship since that fateful night, but it's still unclear whether or not Carl and Lindsay Summer House are dating. A recent interview on People TV’s Reality Check seems to confirm that they are — or at least, they're fine with people thinking they are while the season plays out.

“We have gotten closer throughout the years, and especially after a couple of summers ago and then fall, winter, spring, we just kept getting closer and closer and then we both wound up single at the same time, which I don’t think has ever really happened,” Lindsay explained to People TV. “But our friendship chemistry is just like so apparent that I think a lot of people were sort of waiting for something to happen.”

Carl explained that the two of them would frequently get comments on social media asking if they were dating, "And you feel that pressure,” he said. “Then you start looking at each other and you’re like, ‘Hmm, maybe they’re right. Maybe we should.'"

"And they say date your best friend," Carl explained, seeming to confirm that they really are dating to some degree. "Usually, that goes well.”

The Bravo Summer House page hints that their burgeoning romance (or dalliance, if it turns out to be) will be the focus of Season 4, describing Lindsay as being "more ready than ever to settle down with the man of her dreams" after several flirty, fun summers. The bio specifically names Carl as her surprising "knight in shining armor."

Meanwhile, Carl's bio says that he's "at a crossroads" between finding "the perfect woman to settle down with" — Lindsay is not named here — and his career goals, a dichotomy that may very well cause some drama for the duo if one of them is more invested than the other. We already see maybe they're not always on the same page in the trailer, as they're asked humorously if they're getting married now, and Carl quickly responds "No" when Lindsay says "Maybe."

Fans will have to see how this all unfolds, since it's likely going to be pretty messy. Or meant to be? Carl and Lindsay have known each other for four years, and as the cast has gotten older, it appears that having a bit more of a settled life is now on the table — and who better to settle with than your BFF?