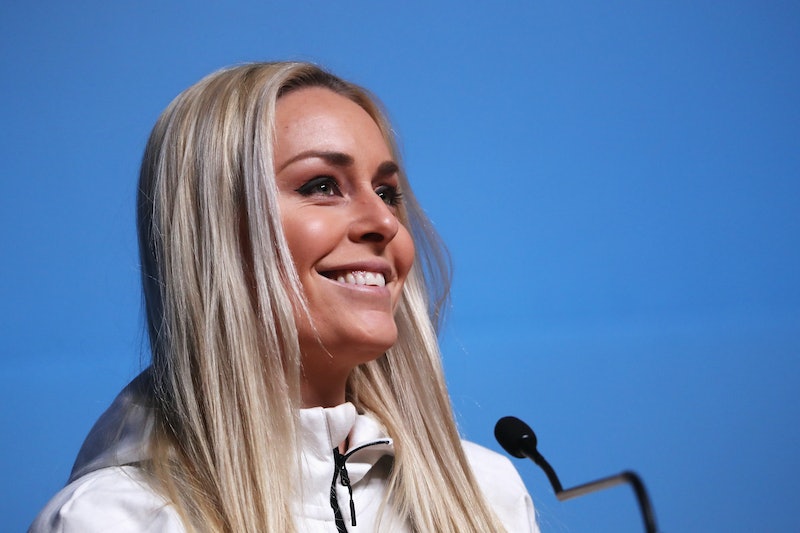 Lindsey Vonn has been present at nearly every Winter Olympics since 2002, and is making her latest Olympic appearance at PyeongChang. While Team USA made a major entrance at the opening ceremonies, many viewers may not have managed to find the prolific ski racer among her fellow members of Team USA. So was Lindsey Vonn at the Olympic opening ceremony? Though she wasn't caught on the telecast, her Instagram story proves she was with Team USA at the ceremony — though some knee issues caused her to leave early.

Lindsey Vonn showed the hustle and bustle behind the scenes of the opening ceremony from the perspective of Team USA as dozens of people waited to be introduced to the crowds at PyeongChang Olympic Stadium. After team finally made its way into the stadium, Vonn decided not to stick around and instead headed back onto a bus. She explained in an Instagram story that her "knee doesn't like standing that long." While she may have been done with the ceremony, she was not done with the evening as her next story post showed her visiting an Italian restaurant. Vonn may have missed out on the ceremony, but after attending opening ceremonies for 16 years, she probably isn't missing too much by ducking out early.

She may not have stayed for long, but getting to the Olympic ceremony was no easy feat for Vonn. While attempting to get to South Korea, the gold-medalist skiier was held up at the gate for six hours of delays. After those six hours, a new plane, and a ten-hour flight, Vonn finally managed to get to South Korea with time to spare before the opening ceremony. She may not have stuck around for long, but that fact that she was able to be there for even a brief moment is a triumph, and provided her the entrance to the Olympic games that she deserves after years away from Team USA.

While Vonn is no stranger to Olympic opening ceremonies, it's been nearly a decade since she was able to attend her last one. While she was present for the 2002, 2006, and 2010 Olympics, Vonn sustained an injury that kept her from participating in the 2014 Olympics as an athlete. While she did serve as an NBC correspondent during that year, Vonn is a welcome presence back on Team USA, returning to the team after 8 years away, and 16 years after her debut in 2002 at the age of 17.

Vonn's explanation that her "knee doesn't like standing that long" likely has something to do with the nature of her injury. As NBC Olympics reports, during the 2013 World Championships, Vonn "crashed during the super-G and blew out her right knee" in a manner so drastic that she needed to be "airlifted to a nearby hospital." While she attempted to recover and got surgery, she eventually admitted that her "knee [was] just too unstable to compete at [an Olympic] level."

The fact that she had to leave the ceremony early suggests that her knee may still be giving her trouble, but that likely won't affect her ability to compete in 2018. She's been training and keeping active in skiing for four years following her injury, and Vonn is as ready as she'll ever be to take a shot at reclaiming the gold. Vonn won the gold medal for downhill in 2010, but what will she bring home in 2018? Fans of Team USA shouldn't doubt that she's still one of America's best competitors and could once again win the country a gold medal in skiing.