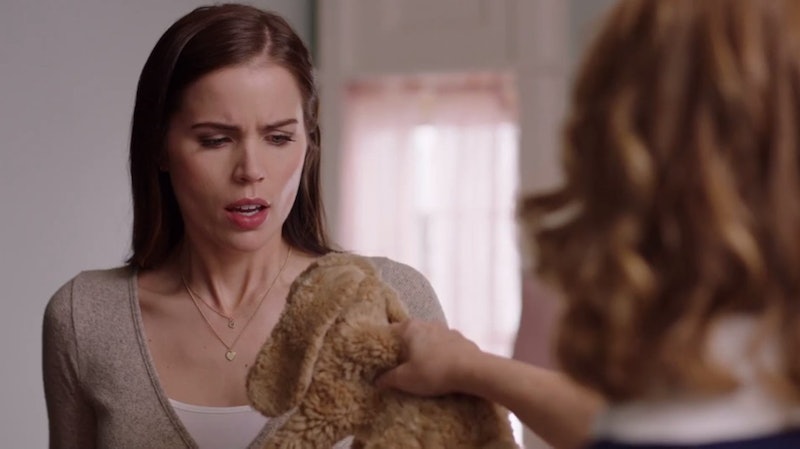 Though finding a missing child is usually cause for tears of joy, Lifetime's Long Lost Daughter might have you crying from sheer terror. The movie, premiering Sept. 21, puts a sinister spin on a happy subject, following a desperate, dangerous woman convinced her new neighbor is actually her long-lost daughter. Viewers will be relieved to know Long Lost Daughter isn't based on a true story, but its heart-pounding premise is reason enough to watch.

According to the film's plot synopsis, Michelle (Sofia Mattsson) has just moved to a small, idyllic suburb to begin building a new life with her boyfriend, Jonathan (Richard Brancatisano). As she starts getting to know her neighbors, she becomes close to a woman named Cathy (Molly Hagan), a seemingly harmless children’s book author. But as anyone who's ever seen a Lifetime movie will guess, things soon take a turn for the worse, and Cathy becomes extremely possessive. It's later revealed that she's falsely convinced Michelle is her daughter, who disappeared 20 years ago. Now, she'll do whatever it takes to make sure she never loses her again.

In Long Lost Daughter’s trailer, Michelle looks understandably confused about this mistaken case of identity. The clip opens with the fateful day that Cathy’s daughter walked to school and never came back. Flash forward a few years to Michelle moving in to the neighborhood, and it doesn't take long for her new bond with Cathy to turn sour. In one scene, Cathy brings Michelle into her daughter’s bedroom and hands her a mysterious envelope. In another, she tries to get Michelle to smell her daughter’s stuffed animal in a misguided attempt to jog her memory about the past.

Eventually another neighbor tells Michelle about Cathy's tragic past, and things only get darker from there. The heartbroken mom shows up at Michelle’s front door unannounced, prompting her to question how Cathy got her address. It's a small town, so she probably just asked someone else… or she’s just full-on stalking Michelle, because this is Lifetime, after all.

The clip ends with Michelle running aimlessly through snowy woods before waking up with Cathy standing over her. "You don't even remember who you are," Cathy says ominously as Michelle's mind seemingly drifts into a drug-clouded haze.

It's a tantalizing preview that brings up a host of questions. Is Cathy planning on holding Michelle hostage? Where is Michelle’s boyfriend in all of this mess? And is it possible that Cathy is right and Michelle is somehow her daughter? The girl looked to be around seven or eight years old when she disappeared, so it seems like she'd have some memory of her mother, but it would certainly make for an interesting twist if she was kidnapped and brought up to believe the people who raised her are her parents ― when in actuality, Cathy is her real mom.

Regardless, it’s going to be a wild ride. Tune into Lifetime on Friday night to see how (or if) Michelle escapes this sticky situation.