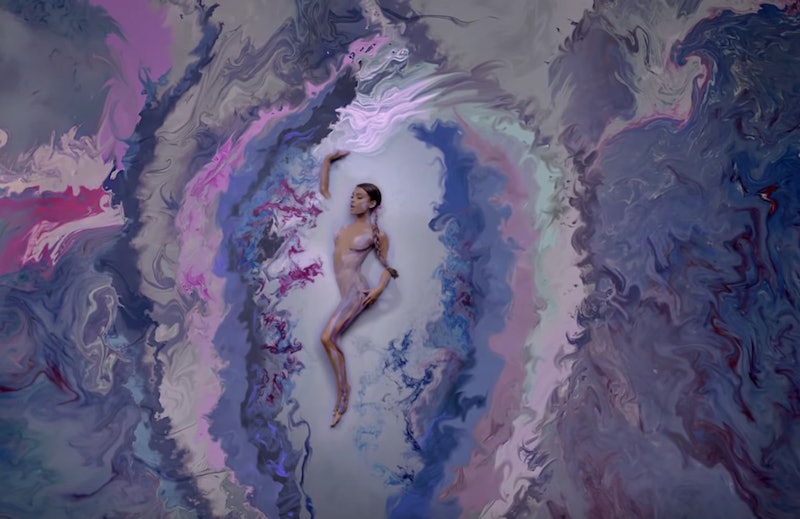 John Mayer isn't the only singer with a connection to Lush's bath bombs. If you are a Lushie who happens to adore Ariana Grande, her style, her perfumes, and her music, then you're about to love tub time that much more. Lush is apparently creating a bath bomb inspired by Ariana Grande and her "God Is a Woman" video. This is not a test. This appears to be happening!

In the new music video, Grande appears naked while soaking in a fluffy swirl of blue and pink liquid. It looks a whole lot like your bathtub when using a Lush bath bomb or bubble bar.

Arianators took to social media to essentially petition the brand to create a Grande-inspired bath bomb. Lush Product Inventor and Chief Digital Officer Jack Constantine went to work. He Instagrammed a prototype he is working on and Grande herself is beyond stoked about the prospect of having her own Lush product. She even commented on Constantine's post and uploaded a shot of his work in progress to her own Instagram story, complete with a NSFW caption.

Grande is all about having her own skin-soothing, water-beautifying bath bomb. But the brand was slightly coy in a PR blast, stating, "Could there be a potential Ariana and Lush collab in the near future?! Stay tuned!"

Based on all of the above, an Ariana Grande x "God Is a Woman" bomb seems like a "go."

Here's a screen shot from the "God Is a Woman" video. It's as though Grande swam in a giant body of water filled with dozens of pastel fizzies.

They were vocal about requesting a "God Is a Woman" tub treat.

Don't you love witnessing Lush magic in action and IRL? We are seeing a bath bomb take shape before our very eyes. Constantine posted a clip of himself watching the "God Is a Woman" video at home on his Insta story. He stated that the first version wasn't "quite working" and that he would be back at it again the next day. He also admitted that he was viewing the video in order to glean further inspo on Draft 2 of the prototype. Now, that's dedication.

Lush shared this shot of Grande's comments on the prototype, which features all of the pretty colors of the video.

Grande isn't the only one freaking out. Arianators are just as thrilled about the prospect.

"Excited" doesn't even begin to cover how we feel!

#Truth. This is a definitive moment in Grande's career.

All signs point to "Yes!"

Grande inspired a bath bomb — and it will inspire others to indulge in baths.

This sounds like the party of the year. Are we invited?

It sounds like Lush and Grande have hit on something with this concept.

Here's the "God Is a Woman" video, which is the main source material.

As it dissolves and melts, it turns your tub into a perfumed, pink and blue, spa-like sanctuary.

One more thing before you go! Grande is set to launch her Cloud perfume at Ulta later this summer. The fragrance is slated to drop around the same time as her new album Sweetener.

Bring on the "GIAW" bath bomb.

More like this
2022's Top Wedding Hair & Makeup Looks, According To Pinterest
By Olivia Rose Ferreiro
Lily Collins Swears By This Product For Perfectly Air-Dried Hair
By Keely Weiss
Bath & Body Works' Summer Scents Are Extra Dreamy
By Paris Giles
What Are "Gym Lips" & Why Is BeautyTok So Obsessed With Them?
By Olivia Rose Ferreiro
Get Even More From Bustle — Sign Up For The Newsletter