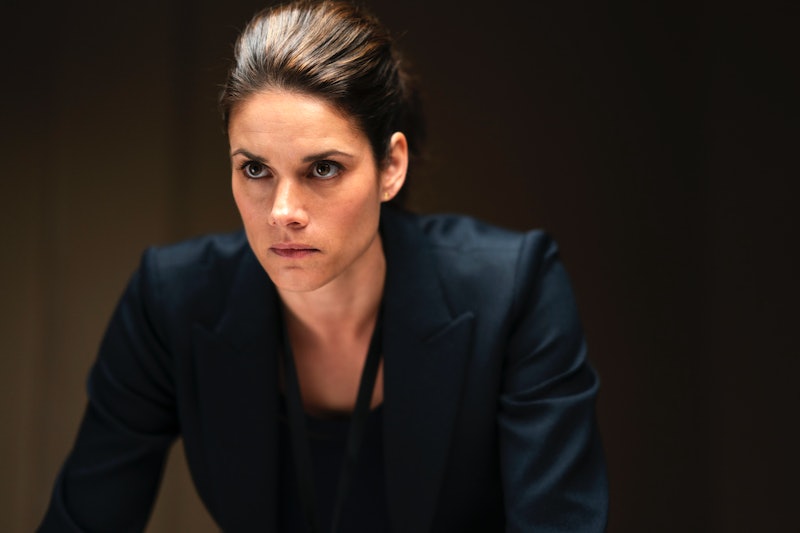 Police-centric shows often play a major role in fall TV lineups, and this year is no different with CBS' FBI. The show was created by producer Dick Wolf, who has mastered the genre with the Law & Order and Chicago franchises. This new show follows special agents Maggie Bell (Missy Peregrym) and Omar “OA” Zidan (Zeeko Zaki) who are a part of an elite team that uses their expertise to protect America from terrorism and organized crime. Given that his other shows feature "ripped from the headlines" plots, it's worth wondering if Maggie Bell a based on a real person. She's pretty fierce.

There’s no indication that this character stems from an actual person in the FBI, but Maggie’s balancing act between her personal past and professional life is a reality for many women in high-pressured jobs. Peregrym, who is known for her work on Rookie Blue, told Variety that Maggie has some unresolved issues that make it hard for her to navigate a difficult career. According to Peregrym, her character has to keep a tough exterior on the job to remain strong for the victims and to focus on the task of saving lives. She said, "For Maggie, she had a tragedy that happened in her past that she hasn’t really dealt with. She buried herself in the work, and right now, that is what she’s doing — putting everything she has into something good, pushing down the stuff she hasn’t dealt with, and I don’t know when that’s going to snap, but you can’t do your job if you’re always affected."

She added that people in law enforcement "have to have a certain level of empathy," but that they "can’t be crying with every person that’s going through a tough time because actually, in a weird way, you’re taking that moment away from the actual victim, and you need to be strong for them. That’s that balance, that line, that I do want to show in Maggie." Peregrym continued, "Sometimes she is having trouble holding it together. There’s no way you can work this stuff and not be affected by girls who are being sex trafficked."

In the same interview, Peregrym revealed that Maggie’s personal issues won’t be a major focus in the show because the main focus is solving complex crimes and the workplace dynamic among the FBI squad. She specifies Maggie’s closeness with her partner OA and some potential drama between them later in the season. Fans will have to just wait and see exactly what happens between this hardworking duo.

It looks like diving into Maggie's business won't be necessary because the FBI trailer proves that there is plenty of action in her work life. The clip starts with Maggie and Omar heading to the scene of a small explosion in the corner of a building. Maggie quickly deduces that there is a more ominous explosion on the way and blocks a mother from going into the building to get her son. As predicted, there is a bigger explosion that forces the building to collapse.

The incident leads Omar and Maggie into a deep investigation of a supposed street criminal who may be a part of a larger terrorist plan. Meanwhile, Maggie is grappling with guilt of the young boy’s death while she races to find out where the next bombs have been planted. It’s obvious that Omar cares for Maggie as his co-worker and friend, but she maintains a tough exterior to cope with her job’s stress because she is a leader. The clip definitely has the action and feel of a classic Dick Wolf series so don’t be surprised if this becomes your new TV addiction.

Yes, most people don’t have to deal with terrorism and death on a daily basis, but many women have to often suppress their emotions at work, often to the point of their own detriment. Maggie seems to have it all together as a top-notch FBI agent, but we can’t help but wonder how she is doing as a person, even if she isn’t real.

More like this
The New Grey's Anatomy Interns Have Fans Feeling So Nostalgic For Season 1
By Brad Witter
'The White Lotus' Season 2 Trailer Teases Multiple Affairs & Another Dead Body
By Bustle Editors
Shonda Rhimes' Net Worth Makes Her One Of The Wealthiest People In TV History
By Hugh McIntyre
How Much Are The 'Schitt’s Creek' Stars Worth?
By Hugh McIntyre
Get Even More From Bustle — Sign Up For The Newsletter