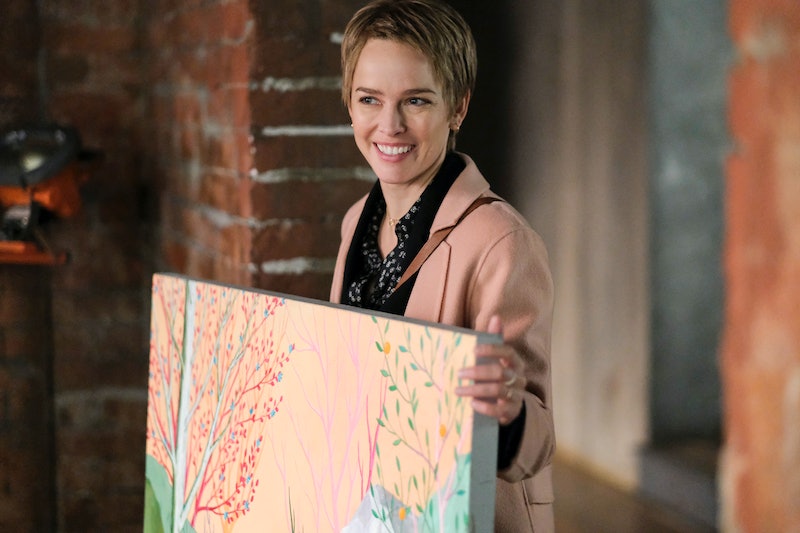 Spoilers ahead for A Million Little Things Season 2, Episode 17. As if things weren't complicated enough on A Million Little Things, it's looking like Maggie might go to Oxford University for work, putting way too much distance between her and Gary. She seems ready to leave, he's starting to date, and it's beginning to turn into one of those problems that could be solved with an honest conversation — if the show's writers didn't need to drag it out until end of the season.

Maggie and Gary's friends are just as annoyed by these two as fans are, so Rome and Regina tried to intervene a bit to get them back together. Rome told Gary the secret that Maggie's planning to leave, and Regina told Maggie that Gary still has feelings for her. Neither one responded the way they should have (the correct response would have been running into each other's arms at last). Instead, Gary called up new love interest Darcy for a drink, and Maggie refused to change her plans. "I can't even process that right now," Maggie said when Regina told her Gary still had feelings. "I'm going to Oxford."

However, the next two episode synopses suggest that Maggie sticks around at least for the time being. The March 19 episode description says, "Maggie’s new venture has her rethinking her relationship with Gary." Is she perhaps going to reconsider leaving and try to make another go of it with Gary? Well, he might spoil that, because the photos from that episode show that he's again hanging out with Darcy, a character whom creator DJ Nash told TV Guide we'd be "seeing a lot more" of in coming episodes. Great.

Then the synopsis for the March 26 episode says, "Maggie shares some shocking news with Gary." The news probably isn't that she's leaving for Oxford, since that wouldn't be shocking to Gary. He already knows that, thanks to Rome. Maybe Maggie tells Gary that she's still in love with him and she's not leaving. And even though he's hanging out with Darcy now, Nash told TV Guide that the threat of Maggie actually leaving may spur Gary into action. "For Gary, sometimes it's just a matter of losing something that makes you appreciate it," He said. The creator was asked if this will lead to some sort of grand romantic gesture from Gary, and Nash coyly replied, "It appears as though nothing can get in their way."

Perhaps Nash is making it seem like they're destined to be together only to rip them further apart, because that's more realistic. But even without Gary to consider, Maggie may not want to leave her friends behind. She started crying when she had to tell Rome that she was going away. It's unclear if she'll actually be able to follow through with that. "There's a place that [Maggie] has in this friend group that's been really important," Nash told TV Guide. So whether she and Gary get back together or not, Maggie could end up reconsidering her Oxford move anyway. Then it will just be up to both of them to make the most of her decision.

More like this
Shonda Rhimes Responded To The Surprise Exit Of A Day 1 'Grey's Anatomy' Figure
By Grace Wehniainen
Here’s Everything Coming To & Leaving Netflix In February
By Jake Viswanath
Netflix Shut Down 'Bridgerton' S3 Rumours About A “Very Dark” Storyline
By Bustle
Linda Ronstadt’s “Long Long Time” Plays A Pivotal Role In The Last Of Us
By Brad Witter
Get Even More From Bustle — Sign Up For The Newsletter
From hair trends to relationship advice, our daily newsletter has everything you need to sound like a person who’s on TikTok, even if you aren’t.