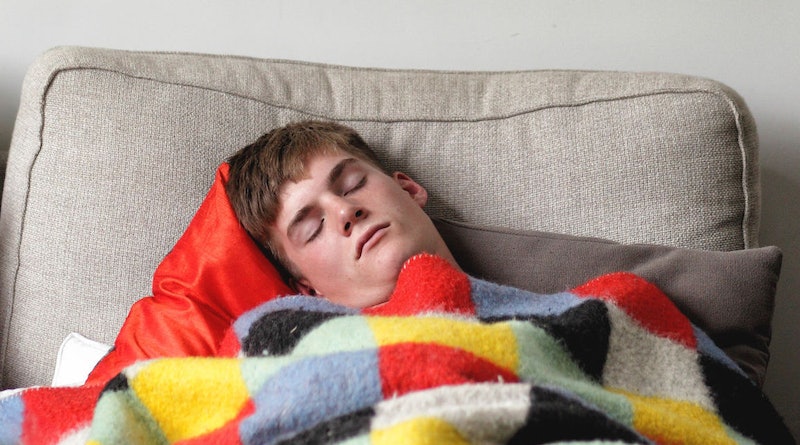 'Tis the season, friends: specifically, if you buy into the concept of man flu, it's the season to watch the women in your life soldier on through their daily responsibilities with a fever and a sore throat and a pounding headache all at once, while the men retire to their beds with a slight case of the sniffles. But is man flu legit? Some scientists argue that men might not be overreacting to mild illness after all, but could in fact experience more severe symptoms than women. Should we be extending just a little more sympathy to cold-stricken men as they ensconce themselves under their duvets for the third day in a row? And could women be evolutionarily blessed with a more robust immune system?

According to the New Scientist, man flu could in fact be a result of viral evolution. Dr. Francisco Úbeda and Professor Vincent A.A. Jansen of London's Royal Holloway University explain that people with uteruses are more likely to pass on viruses to their children when pregnant, during childbirth, or via breastfeeding. It's more beneficial for a virus to be less harmful to them; if they die before pregnancy, after all, there's no way for them to pass it to their children.

Meanwhile, Dr. Kyle Sue, a clinical assistant professor at Canada's Memorial University of Newfoundland, performed a survey of existing studies to determine whether men could suffer more from viral respiratory illnesses. "Deeming male viral respiratory symptoms as 'exaggerated' without rigorous scientific evidence, could have important implications for men, including insufficient provision of care," he wrote in the British Medical Journal.

Dr. Sue also looked at statistics on hospital admission in Hong Kong between the years 2004 and 2010, finding that adult men were more likely than women to be admitted for seasonal influenza. In the U.S., meanwhile, data collected between 1997 and 2007 revealed that men were more likely to die from influenza. "Men may not be exaggerating symptoms but have weaker immune responses to viral respiratory viruses, leading to greater morbidity and mortality than seen in women," Dr. Sue said.

He did acknowledge, however, that other factors could influence the difference between men and women's experience of flu. As the Guardian notes, studies have indicated that women are more likely to seek medical care, and are better at taking care of themselves when ill.

"There need to be more studies, higher quality studies that control for other factors between men and women before we can definitely say that this difference in immunity exists," Dr. Sue told the Guardian. "Is it that women are more resilient, that they are able to juggle more when they are ill, or is it that they don’t have as severe symptoms? That we are not too sure about. But I think everyone should be given the benefit of the doubt when they are ill."

Others also cast doubt on his findings, including Professor Helen Stokes-Lampard, Chair of the Royal College of GPs. "The vast majority of robust scientific evidence suggests that flu is not sexist and there is no such thing as 'man flu'," she told the Independent. "While there are people who believe that 'man flu' is an actual disease, and some men (and women) genuinely believe it is the reason they are unwell, there is little science to back this up."

However, she added, "There has been some research to suggest respiratory tract infections, as they are known, can present more severely in men than women and the best advice for anyone affected is to rest at home, drink plenty of fluids and to take over-the-counter painkillers, such as paracetamol, if necessary."

So the men in your life might not be exaggerating when they claim the cold they're battling — which you had just last week — is more debilitating than you could possibly imagine. Alternatively, women might just be significantly better at getting on with things while ill. Until science reaches a more definitive conclusion? I'll leave that for you to decide.