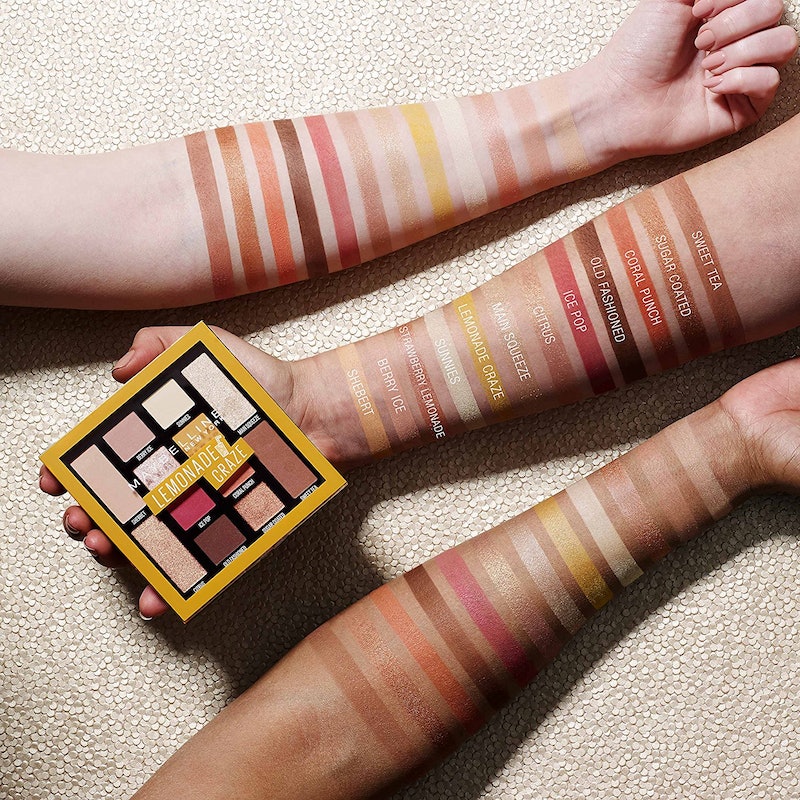 Sometimes when a brand does something right, they really do something right. This time it seems like a drug store staple has crafted the next must-have beauty item. The best selling palette on Amazon is actually Maybelline's Lemonade Crazy Eyeshadow Palette, and guess what? It's not even out yet. Clearly, high-end and luxury brands should be quaking over this upcoming release.

How long until you can get it, though? There's good and bad news here, makeup fans. Let's start with the good. The palette is technically available right now, but it's pre-order only. If you must have this ultra-popular palette, you can go ahead and snag it. The bad news? It won't be released digitally until Apr. 13 and won't make it to American retailers until June 2018. You've still got some time to wait until you can craft Beyonce-inspired lemonade makeup looks.

Another big question about the palette is whether or not it will be limited edition. Well, god news here: Maybelline tells Bustle that it is not a limited release. Say hello to your new favorite (permenant) drugstore palette.

Word about the palette didn't just start, though. It actually made its internet debut back in February on the brand's Instagram. A few days ago, Allure showcased the palette and revealed that it's not just a neutral palette with pops of pink and yellow. No, this beauty also just happens to be lemonade scent. Talk about wanting a scratch and sniff option on the internet, right?

Plus, in even more fun news, all of the shades in the palette are named. Why is that special, though? Because according to Allure, this is the first time that Maybelline has ever done so. From Sunnies to Sherbet, the brand clearly thought this one through.

It's no wonder the palette is topping the charts on Amazon. The brand took to their Instagram account to share a peek at just how pigmented the shadows are, and based on the swatches, fans shouldn't be disappointed.

As for the cost, well, there's the beauty of this eyeshadow palette being shoppable in a drugstore. It's super affordable. According to the Amazon pre-order link, the palette is currently retailing for $10.99. For less than $15, you can get the most popular seller on Amazon. It's basically Christmas in springtime right now for beauty lovers.

Coupled with the affordable price tag and colors, fan reaction could also be leading the Lemonade Craze eyeshadow palettes march to number one on Amazon. Twitter users are currently chatting about it on the platform.

That vibrancy is going to be perfect for summer.

Cute AF it certainly seems to be.

Maybelline fans may be thinking the palette looks a bit familiar, though, and for hardcore drugstore beauty lovers, it should. As it turns out, they've been teasing this launch since Feb. 9 when it was used in the Jason Wu fashion show at New York Fashion Week. Honestly, if it's good enough for fashion week, shouldn't it be good enough for everyone?

If you want to be one of the many who have already snagged their own Maybelline Lemonade Craze Eyeshadow Palette, head over to Amazon now and get ready for the Apr. 13 release online. With this much hype already happening around a product that hasn't even launched, you'll definitely want to try it for yourself to see if the hype is, actually, real.