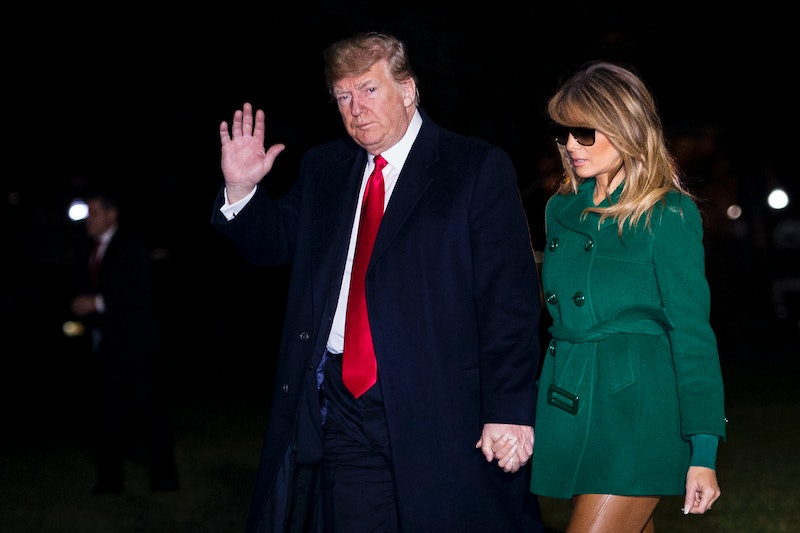 On Tuesday evening, POTUS is giving his second State of the Union address as president. A number of people were expected to attend his address, including Supreme Court justices, both houses of Congress, and Trump's cabinet members. However, given how absent she's been from the public eye in the last three weeks, some people might be wondering whether Melania Trump is at the State of the Union this year. As it turns out, she will definitely be in attendance.

Per Fox News, Melania will sit in her own viewing box in the gallery of the House chamber. An official statement from the White House confirms FLOTUS will be surrounded by 13 special guests who were handpicked by POTUS. These guests include Joshua Trump, a 6th grader with no relation to the president who was bullied for his last name, and Ashley Evans, a woman who dealt with opioid addiction during her pregnancy. Since Melania's "Be Best" campaign deals with cyber bullying and the opioid crisis in particular, the connection between FLOTUS and these guests seems clear.

For the State of the Union last year, FLOTUS arrived separately from her husband, according to CNN. Instead of riding to the speech with Trump, a tradition, Melania rode with some of the "heroes" and survivors who would be honored during the SOTU.

Because this reflected a break with tradition, there was some speculation about why Melania made that decision. To CNN, Melania's spokesperson, Stephanie Grisham, said, "[She] is honoring her guests for the true heroes they are." White House Press Secretary Sarah Sanders confirmed the same reasoning as Grisham, stating later via CNN, "[Melania arrived separately for] no reason other than she can greet the guests and he can go straight in."

Beyond Melania's separate mode of transportation to the SOTU, the specific outfit she chose to wear also got attention. According to Vanity Fair, Melania wore a white pantsuit, which seemed remarkable for a number of reasons. First, white has long been known to be the color of the suffragette movement, and was also known to be Hillary Clinton's color of choice during her presidential campaign. Second, the publication notes, female Democrats showed up to Trump's first address to Congress in a sea of white in February of 2017.

This year, the State of the Union will probably be a little bit different from last year's. This is due to a pretty large elephant in the room that POTUS will likely address at the beginning of his SOTU address: that the government was partially shutdown for over a month.

Melania, for her part, kept quiet during the shutdown, attending very few public events during the crisis. She did, however, post multiple Instagrams, including one commemorating her husband's two years as president, and one wishing everyone a happy New Year. She also went with her husband to make a visit to the troops in Iraq following Christmas. CNN notes that after that trip, Melania was virtually unseen for the first three weeks of January.

What's more, the network reports that from Dec. 22 to Jan. 18, Melania was seen just four times at public events. She also notably went to Mar-a-Lago for Martin Luther King Jr. weekend, CNN reported, which was her fourth solo flight (AKA flight without POTUS) since the shutdown began.

Melania has made no public comments on the partial shutdown, neither during it nor following its reopening.