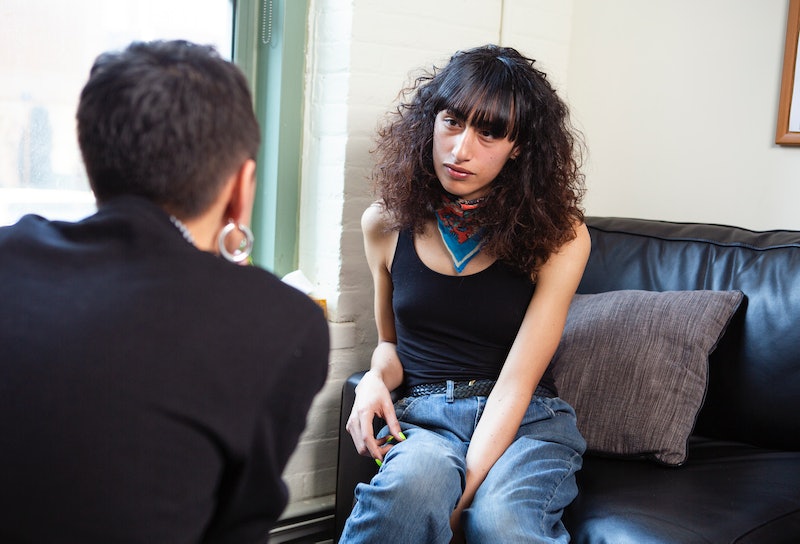 Conversations about your mental health can be very difficult to have. Even with your own therapist, you might struggle to discuss the inner workings of your brain — and that's OK. But the vulnerability needed in therapy can be compounded by intense stigma against talking about mental health and against people who have mental health issues. Indeed, according to a recent CBS News poll, almost nine out of every 10 Americans recognize that there is "at least some" stigma surrounding mental health. But if so many people know that stigma exists, why does it still impact people?

The poll, conducted via phone, gathered its data from a random sampling of over 1,200 people living in the United States. Of the respondents, 79% believed that mental illnesses constitute real medical conditions. And only 12% of those polled thought that there were adequate mental health services available across the country.

Even when mental health services are technically accessible, though, stigma against mental illness often prevents people from seeking treatment. "Clients will frequently tell me in our first session that it took them months, if not years to finally make the appointment," says clinical therapist and Anxiety and Depression Association of America (ADAA) member Michelle Lozano. "If a person is on the fence about seeking treatment and one sibling or parent speaks negatively about it," she tells Bustle, "that could be the deciding factor that ultimately prevents them from getting help."

In these ways, access to mental health care is more complicated than just finding a therapist. Still, being able to get care is a big predictor of attitudes about mental health, according to the CBS News poll. Low-income Americans and people who don't have insurance were far more likely than their higher-income, insured peers to report that they wouldn't feel comfortable or confident in knowing how to access needed mental health services. And even though 73% of respondents said they personally know someone with a mental health disorder, only 43% of people said they'd feel comfortable talking about their own mental health with their friends.

Judging yourself because you've internalized all that stigma is common, according to Lozano. "Most clients share the belief that struggling with their mental health makes them weak, or deeply flawed," she tells Bustle. "These are damaging self-judgments that add a thick layer of shame to the already existent suffering."

According to the CBS News poll, gender also has a large influence on a person's willingness to discuss their mental health with their friends. While 50% of women polled said they would be very comfortable discussing their mental health with their friends, only 36% of men felt that way, even though fewer than half of men polled said that there's a lot of discrimination and stigma in this country about mental illness.

For people of any gender, breaking mental health stigma with others and inside yourself can start with difficult but important conversations. If you can, Lozano advises, "Be the first of your friend group to talk about the panic attack you had at work. Be the first in your family to share about the profound therapy session you had before dinner." The ADAA has resources to help people find mental health care, if you or a loved one is seeking support.

You might be surrounded by stigma about mental health, and according to the CBS News poll, you're statistically likely to feel the effects of that stigma yourself. Still, Lozano says that pushing through your own internalized stigma and the judgments other people might have can be hard, but is ultimately worth it. "The world is already tough enough on us," she tells Bustle. "There’s no need to be so tough on ourselves. We owe it to ourselves to seek the help that we need." Because there is nothing wrong with talking about what's going on for you, or seeking the care you deserve.