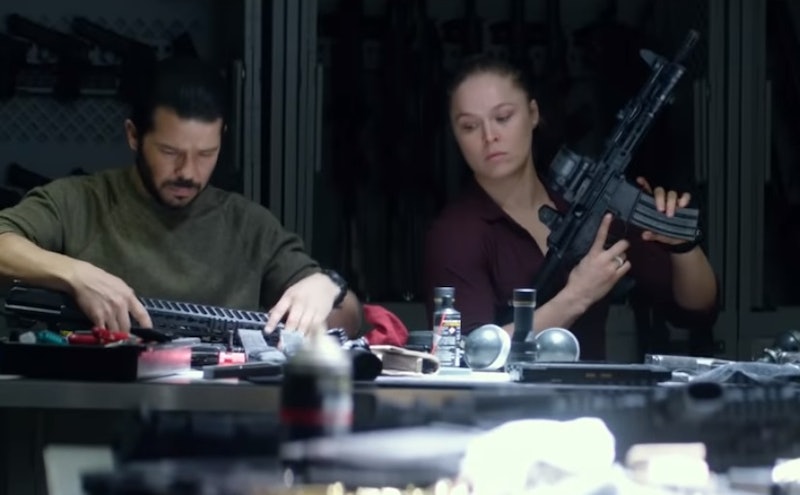 In Mile 22, a top-secret, top-level CIA team known as Overwatch has to extract a defector carrying explosive information. The best way out? Straight through a grueling 22 miles of enemy terrain swarming with operatives who will do anything to stop them. Mark Wahlberg leads the team, which includes MMA fighter Ronda Rousey, as they veer through city streets, duck explosives, and avoid getting sniped by enemy fire. But is Mile 22 based on a true story? Overwatch refer to themselves as ghosts, the invisible hand of the CIA; even if they were directly based on a true story, it'd be their real-life counterparts' jobs to make sure none of us found out about it.

The movie, out Aug. 17, isn't the first time director Peter Berg's crossed Hollywood with military operations; previous films like Lone Survivor and Patriot's Day all heavily utilize real-life combat training and locations to ground the films in realism. Yes, even Battleship, the movie based on the Hasbro game where Rihanna shoots at aliens, was actually shot on the USS Missouri.

The Overwatch team was no different; in an interview with SlashFilm, star Lauren Cohan described extensively training with military men until it became ingrained habit. "We trained with honestly some of the best men that can train you at being really proficient with weapons...Pete [Berg, director] said, “You know, you’re not going to come away from this film able to look like you can play this character. You’re going to actually come away from this film with a new skill,” and that’s completely true, and it’s been just awesome. We’ve been through a Navy SEAL, CIA, Peter Berg boot camp," said Cohen.

Though Overwatch probably isn't an actual team within the CIA (the agency is so rife with redacted material, black ops and covert assignments that it's hard to discount anything completely), there are plenty of similar groups within the CIA that operate on a similar basis. As The Washington Post reports, The Global Response Staff was a post-9/11 team created to provide security and protection for CIA case officers when they meet up with assets — basically covering real-life, on-the-ground spy work, the guys who get James Bond's back.

Then there's the CIA Ground Branch. For such a calm name, Ground Branch employs third party soldiers of fortune, military contractors, and CIA employees to conduct "unconventional warfare", and lately have been on the ground in Afghanistan and Iraq. The group that most closely resembles Overwatch though is, of course, the one we know the least about. The Special Activities Division, specifically the Special Operations Group, is the CIA's covert paramilitary operations unit. According to American Special Ops, "They are one of America's most secretive and lowest profile special ops organizations", and take care of jobs the U.S. government would prefer not to be directly associated with.

A Global Security article from 2002 spells it out more clearly: "They don't play by the normal rules because they don't have to....The commandos' job is to gather intelligence, work as forward observers and perform covert operations that mainstream U.S. forces legally are not allowed to do or cannot do because of their more public, high-profile status."

Escorting a highly valuable asset through 22 blistering miles of enemy fire to reach a waiting plane with a 10-minute window for takeoff sounds like the kind of dangerous and demanding job that's right up SAD's alley. The Overwatch team in Mile 22 is the closest you'll likely come to ever seeing them in action.

More like this
The 'Spiderhead' Movie Ending Is Nothing Like The Short Story It’s Based On
By Morgan Leigh Davies
You Might Want To Rewatch 'Elvis' For This Britney Spears Easter Egg
By Grace Wehniainen
What Colonel Tom Parker Was Really Like
By Morgan Leigh Davies
What Does The Presley Family Think Of 'Elvis'?
By Arya Roshanian
Get Even More From Bustle — Sign Up For The Newsletter