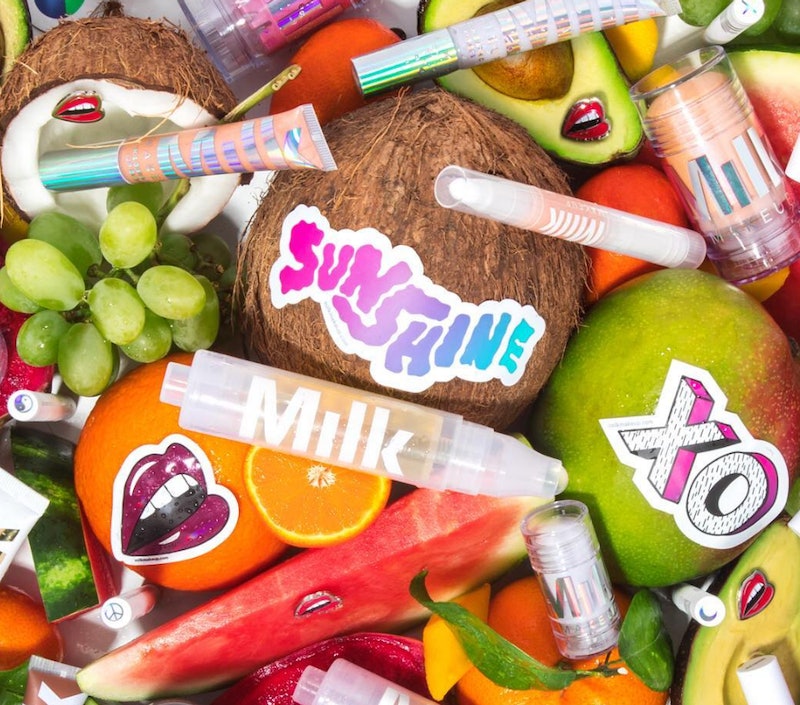 Kat Von D Beauty has a new peer. Milk Makeup is now 100 percent vegan! The brand started out cruelty-free but has taken its animal sympathies and commitment to the earth a big step further. This is absolutely amazing news for all our furry friends and beyond with whom we share the planet.

Milk Makeup, which launched back in 2016, has steadily built up a hardcore following. That's due to its quality suite of products, such as the chubby Blur Sticks and Holographic Sticks, among many others.

The brand posted its newly vegan status on its website, noting it has opted to go vegan because its better for the animals, the earth, and your skin. Replacing non-vegan ingredients with those that are vegan doesn't change product efficacy, either! So don't panic because you fave products are only getting better.

Yes, it might seem slightly ironic that Milk Makeup is vegan yet shares its name with a dairy product. However, the word "Milk" has so many connotations, like the milky texture of a lush and luxe product. Plenty of those meanings apply to Milk's assortment of cosmetics. So put it in perspective.

As Allure reports, brand co-founder and creative director Georgie Greville started the company along with Dianna Ruth and Zanna Roberts Rassi when they all had young children upon launch. Therefore, the Milk founders were all hyper-sensitive to the toxicity in products.

"We wanted to use healthy ingredients that we felt great about, especially if our kids got their hands on the products," Greville said.

Milk created its cosmetics without icky stuff like parabens, sulfates, mineral oil, and talc. After two years in production and on shelves, they realized they could switch to an all-vegan lineup without sacrificing the quality or the color richness of their products.

As such, Milk has eliminated animal-derived ingredients, such as honey, beeswax, gelatin, collagen, and lanolin, among others, from its repertoire.

The Milk trifecta is confident in their choice to get rid of animal byproducts. Ruth made this critical point to Allure, saying, "There is no animal product or byproduct that doesn't have a safe natural or synthetic alternative."

Since vegan products are better for your skin and have the same effectiveness, this change was a no-brainer for Milk.

The brand further breaks down its reasoning and its philosophy reading its vegan switch in an informative FAQ on the editorial portion of its site.

Milk joins the aforementioned Kat Von D Beauty, which reformulated its non-vegan products to be just that. The brand's founder and fearless leader Kat Von D is a committed and passionate animal activist who is also developing a line of vegan footwear.

The cruelty-free company has committed to becoming vegan by 2020. It's a noble goal and they are well on their way to attaining it.

To further clarify and in case you are in need of a refresher, cruelty-free and vegan are not the same thing. Cruelty-free means that animal testing does not take place and animals are not harmed in any phase of the development of a product.

Vegan means that no animal ingredients or even animal-derived byproducts are used in the recipe for a product.

It's truly refreshing that so many beauty brands are opting to go vegan. Milk Makeup, Kat Von D Beauty, Hourglass, and many others can inspire other brands to follow in their footsteps.

Milk devotees expressed both joy and support for Milk going vegan in the comments of the Insta post. This is a change for the better and it's a major improvement!