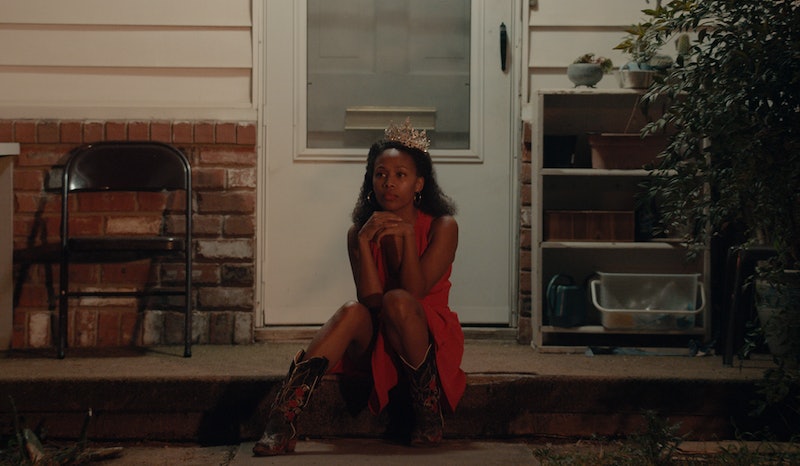 This year marks the 155th anniversary of Juneteenth, an annual holiday commemorating the end of slavery in the United States which has been celebrated by African Americans since the 1800s. But as the nation protests to put an end to the police brutality practices that killed George Floyd and Breonna Taylor, there's been a heightened interest in the holiday. And one of the many ways you can celebrate the holiday is by watching filmmaker Channing Godfrey Peoples' feature directorial debut: Miss Juneteenth (available now on VOD and Digital). And knowing that Juneteenth is a real holiday you might wonder, is Miss Juneteenth based on a true story?

The film, which premiered back at the 2020 Sundance Film Festival, tells the story of "build like a bird" Turquoise Jones (Nicole Baharie), a single mom who was crowned Miss Juneteenth as a teenager, but who isn't exactly living her dreams 20 years later. She runs Wayman’s BBQ & Lounge while trying to keep tabs on her own teenage daughter, Kai (Alexis Chikaeze). Determined to right her own wrongs, Turquoise enters Kai into the Miss Juneteenth pageant in hopes that she'll do more with the title. Miss Juneteenth isn't based on any specific person, but it's very much based on real pageants that happen across the country in celebration of the holiday.

Specifically, Juneteenth celebrates the date when Union Gen. Gordon Granger arrived in Galveston, Texas to announce the end of the Civil War. As the New York Times reports, about two months after Confederate General Robert E. Lee surrendered at Appomattox, Virginia General Granger's announcement was to "inform enslaved African-Americans of their freedom," and "put into effect the Emancipation Proclamation, which had been issued more than two and a half years earlier on Jan 1, 1863, by President Abraham Lincoln."

As a result, Juneteenth has been a holiday celebrated in African American communities for the better part of 155 years. While the holiday originally started in a single state, Juneteenth celebrations have spread nationwide and include everything from small backyard barbecues to large city parades, historical reenactments, and street fairs. Another notable part of the festivities are Miss Juneteenth pageants, in which Black teens compete for college scholarships. The pageants became a part of the Juneteenth celebrations sometime around the mid-20th Century and have been a time-honored tradition ever since.

"One of the things that has always been super special to me about Juneteenth every year is the Miss Juneteenth pageant," Peoples tells Dallas News. "I got to see young African American women who have all this hope and promise. For me as a kid, that's what I could imagine being. Hopeful. That was a defining moment for me."

Juneteenth is recognized as an official holiday in 47 out of 50 states, but the call to make Juneteenth a national holiday has been buzzing around for years, yet has stalled in Congress, the Times reports. With the Black Lives Matter movement and calls to end racism spreading all over the world, hopefully it won't be too long before Juneteenth is given the national recognition it deserves. Pageants and all.

More like this
Here’s Everything Coming To & Leaving Netflix In February
By Jake Viswanath
Yes, You Can Stream ‘To Leslie’ In The UK Now
By Sam Ramsden
11 Movies To Watch At The 2023 Sundance Film Festival
By Chloe Foussianes
Gerard Butler Insisted On Adding This Pivotal Scene To 'Plane'
By Catharina Cheung
Get Even More From Bustle — Sign Up For The Newsletter
From hair trends to relationship advice, our daily newsletter has everything you need to sound like a person who’s on TikTok, even if you aren’t.