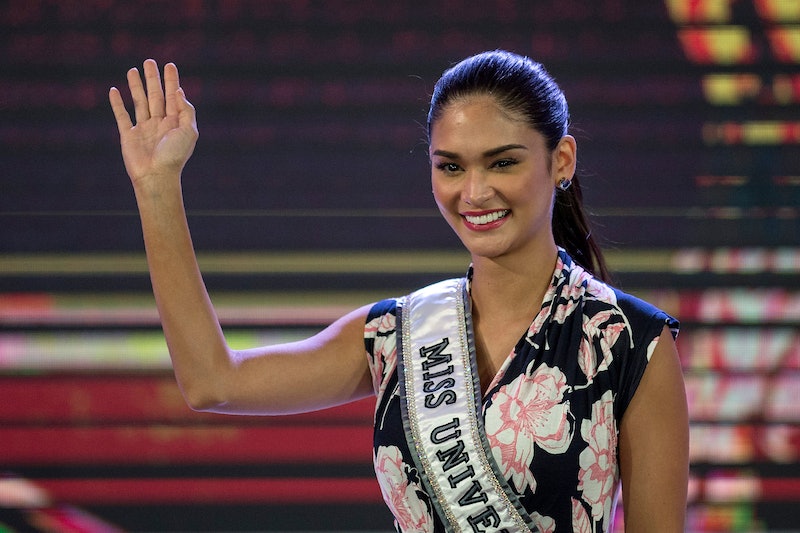 One of the largest questions surrounding Donald Trump's presidency has been how he'll manage his business empire while in office. Some have argued that his stake in global commerce could present a potential conflict of interest, and many have called for him to step down from his outside enterprises in order to focus on the country. Some may recall that Trump made controversial remarks about his involvement in Miss Universe during his campaign, and with the pageant set to air on Jan. 29, viewers may be wondering: Is Donald Trump still connected to Miss Universe?

According to Variety, the President actually sold the rights to the organization to WME/IMG in September 2015. The financial details were not disclosed. The deal hit just days after Trump announced via Twitter that he had bought out NBC's 51 percent share of the beauty pageant, which the network had co-owned with Trump since 2002. The network severed ties with the now-president in July 2015, refusing to air Miss USA after Trump made controversial remarks about Mexican immigrants during a campaign speech. Trump's statement to Bustle issued in June 2015 read in part:

As of today, Donald J. Trump is no longer affiliated with NBC. Mr. Trump stands by his statements on illegal immigration, which are accurate. NBC is weak, and like everybody else is trying to be politically correct--- that is why our country is in serious trouble.

NBC also released a statement at the time, which read in part:

At NBC, respect and dignity for all people are cornerstones of our values. Due to the recent derogatory statements by Donald Trump regarding immigrants, NBCUniversal is ending its business relationship with Mr. Trump. To that end, the annual Miss USA and Miss Universe Pageants, which are part of a joint venture between NBC and Trump, will no longer air on NBC.

You can read both NBC and Trump's full statements here.

Trump's controversy with the pageant didn't start and end with his comments on immigration. His behavior during the pageants and towards the pageant contestants was a frequent topic of conversation throughout the 2016 election cycle. Rolling Stone dubbed him a "storied pageant creep" after incidents like a 2005 interview with Howard Stern surfaced in which Trump bragged that he often slipped backstage while the women were getting changed — an assertion later confirmed by several participants, as reported by CBS. Trump told Stern at the time:

"I'll go backstage before a show, and everyone's getting dressed and ready and everything else. You know, no men are anywhere. And I'm allowed to go in because I'm the owner of the pageant. And therefore I'm inspecting it... Is everyone OK? You know, they're standing there with no clothes. And you see these incredible-looking women. And so I sort of get away with things like that."

According to Rolling Stone, Miss California, Carrie Prejean, alleged in her memoir that Trump pitted women against each other by asking them to rate each others' looks, though Trump denied these claims to the New York Times. "[I would] never do that," he said. “I wouldn’t hurt people. That’s hurtful to people.”

In the same Times article, Miss Utah, Temple Taggart, accused Trump of kissing her without consent. "He kissed me directly on the lips. I thought, 'Oh my God, gross.' He was married to Marla Maples at the time. I think there were a few other girls that he kissed on the mouth. I was like, 'Wow, that's inappropriate,'" she told the outlet. Trump denied these claims in the same Times article, which reported that he said "he is reluctant to kiss strangers on the lips." Trump further commented on all the women's claims to the Times saying, "A lot of things get made up over the years. I have always treated women with great respect. And women will tell you that.”

Trump also allegedly body-shamed Alicia Machado, the first Miss Universe to win under his watch. According to Machado, Trump had allegedly called her "Miss Piggy" because she gained weight and "Miss Housekeeping" because she's Latina. He later allegedly invited reporters to watch her exercise against her protests. "I was about to cry in that moment with all the cameras there," she told The New York Times. "I said, 'I don't want to do this, Mr. Trump.' He said, 'I don't care.'" When asked about these instances, Trump told the Times only that "he had pushed her to lose weight" and said, "To that, I will plead guilty."

After Hillary Clinton confronted Trump about this alleged behavior toward Machado during a debate, he went on Fox & Friends and said of Machado, "She gained a massive amount of weight, and it was a real problem." ‌

After Trump sold the rights to Miss Universe to WME/IMG, the broadcast switched networks and will be shown on FOX this year, as it was last year.

More like this
The 'Teen Wolf' Creator Revealed If 'Wolf Pack' Takes Place In The Same Universe
By Grace Wehniainen
Matt Hancock’s TikTok Is The Most Matt Hancock Thing Ever
By Sam Ramsden
Gillian Anderson's New Netflix Drama Is *Nothing* Like 'Sex Education'
By Frances Stewart
Eurovision Has Been Given A Whole New Look Ahead Of Its Liverpool Debut
By Bustle UK
Get Even More From Bustle — Sign Up For The Newsletter
From hair trends to relationship advice, our daily newsletter has everything you need to sound like a person who’s on TikTok, even if you aren’t.