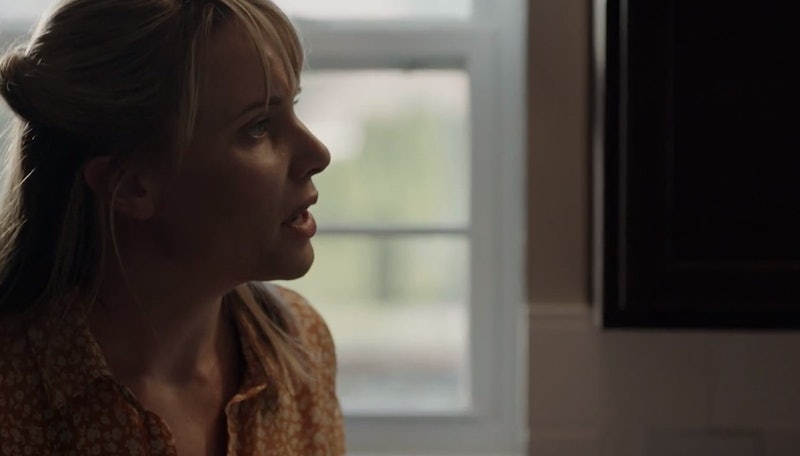 Mommy groups are supposed to be a safe place for moms to find friendship and support. But sometimes they end up being an uncomfortable space filled with lies, judgment, and a cliquish vibe. So, it’s no surprise that a Lifetime is putting a dark twist on mom groups its latest movie. Thankfully, Mommy Group Murder isn’t based on a true story but this story could totally happen in real life.

Per Lifetime’s description, a new mom joins a mommy group to find friends and ease the stress of having children and a husband. Everything seems to be going well until one member's husband winds up dead and she's convinced that one of her new mom pals is behind the murder. Now, she has to race to find out the truth before she is next on this killer's list. Lifetime has built part of its reputation on murderous moms, so this plot is right on brand for the network.

The film's writer and director Nick Everheart took to Twitter to briefly discuss Mommy Group Murder which, according to his tweets, was formerly named The Perfect One. Everheart admits the new title isn't great, but he assures fans that this movie is about so much more than the typical whodunit premise. He proudly says that Mommy Murder Group was a love-filled project that features solid cast performances and will focus on motherhood, postpartum depression, and the harsh expectations that mothers and wives have to endure in their lives. Hopefully, Lifetime fans will love this movie as much as they love his previous Lifetime flick The Wrong Son.

Mommy Group Murder's trailer paints a sinister portrait as Grace invited newcomer Natalie to join her mom crew. The ladies sip wine, hug, and enjoy each other's company until Natalie introduces Grace to her husband Ryan. Grace and Ryan start to get a little too chummy, which causes Natalie to worry about her marriage. The rest of the trailer is a bit ambiguous with glimpses of the moms looking either paranoid or evil with flashes of a gun, bloody knife, and a screwdriver. Of course, there's someone hovering outside of a home on a rainy night and a bloodcurdling scream. There's going to be a ton of drama and death but it's totally okay to enjoy this fictional film.

The clip does lead to a lot of questions. Did Grace have an affair with Natalie's husband or did he ultimately reject her advances? If they did start an affair, Grace might have killed her own husband in hopes of being with Ryan. This could spell trouble for the other moms if Grace finds a way to frame them for the murder. Grace may have also tried to get with another woman's husband and killed him after he threatened to expose her shady ways. There's so many possibilities for this twisted plot, but it's clear that Grace is not trustworthy.

Find out how Natalie breaks free from this malicious mommy clan when Mommy Murder Group debuts on Mar. 16 at 8 p.m. ET.