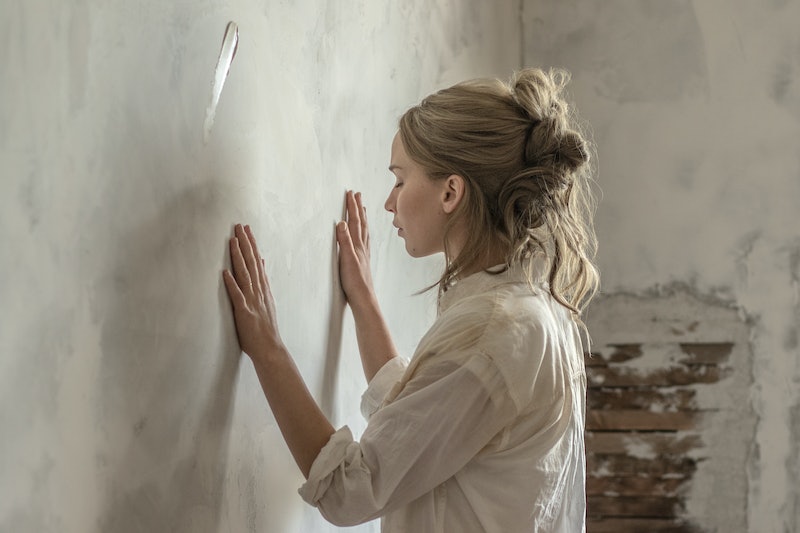 Darren Aronofsky's mother! is one of the most talked-about, contentious, and debated films in recent memory. The horror-thriller, which stars Jennifer Lawrence and Javier Bardem as a couple whose serene existence is interrupted by home invaders, has been both praised and panned by critics and audiences alike. This divisive reaction to the film is reflected in the many interpretations of its meaning, as well. Though there's the obvious biblical allegory going on in mother!, there are also other layers to the film that give it more than one definitive theme. One of these layers contains the deep environmental message of the film, in which topics like climate change, overpopulation, and global extinction all are addressed, making mother! a film about mother nature that's eerily prescient.

Spoilers ahead! Though on the surface, mother! tells a story of a crazy home invasion, underneath lies the biblical tale of creation, the entire history of the Earth and humanity, as well as eventual apocalypse. Lawrence's character is Mother Earth, the feminine representation of our planet, and the house that forms the setting for the movie acts as an extension of herself. She can sense the beating heart at its center and shares breath with its very walls. Bardem plays a take on the Judeo-Christian God, and though the house is described as "his," mother is the one who lovingly puts her time and energy into refurbishing every room and fixing it up as a "paradise."

As the story grows more and more insane, with people entering the house uninvited, taking over their lives, and well, basically enacting all of the wars and destruction humanity has experienced over the millennia, it becomes evident that the house, and mother herself, are stand ins for our planet. When the "guests" proceed to destroy the house, mother painfully asks them why, but one reveler's only response is a cold, "How else will anyone know we were here?" The house becomes overstuffed and crowded to the point where movement becomes impossible in an obvious nod to overpopulation. Some of the intruders even try to help by painting walls or boarding up rooms, though mother's original plans are cast aside. The perpetrators laugh in her face when she demands they leave "her house," and mother's vision for her paradise is lost.

The Biblical blueprint for mother! serves as a familiar setup for audiences to grasp the plot, but as it turns out, the ecological elements of the film were very much intentional as well. The environmental underpinnings were suggested when critics at initial screenings were handed a poem to read before watching the film. In the text, which you can read below, humanity's access to food, clean air, and live-giving water are all referenced, as is our own potential for taking these things for granted.

As the film goes on, the ecological metaphor becomes more and more brutal. The house isn't the only one that's ripped apart, mother herself is beaten and bloodied in a direct reflection of how we humans have treated our home planet. And mother's final act of self-destruction comes across as a warning to humanity; that by disrespecting our planet to such a degree, we're heading for our own destruction via super hurricanes, global warming, climate change, earthquakes, and environmental disaster.

This message, that we may bring about our own earthly demise, seems to be very much Aronofsky's intention. In the film's press notes, he detailed the inspirations behind his frenzied, five-day writing of the script for the film.

It's a mad time to be alive. As the world populations nears 8 billion we face issues too serious to fathom: Ecosystems collapse as we witness extinction at an unprecedented rate; Migrant crises disrupt governments; A seemingly schizophrenic U.S. helps broker a landmark climate treaty and months later withdraws; Ancient tribal disputes and beliefs continue to drive was and division; The largest iceberg ever recorded breaks off an Antarctic ice shelf and drifts out to sea. At the same time we face issues too ridiculous to comprehend: In South America tourists twice kill rare baby dolphins that washed ashore, suffocating them in a frenzy of selfies; Politics resemble sporting events. People still starve to death while other can order any meat they desire. As a species our footprint is perilously unsustainable yet we live in a stat of denial about the outlook for our planet and our place on it.

"From this primordial soup of angst and helplessness," Aronofsky says, he wrote the script for the film.

Watching mother! is rather brutal, not only for its violence, gore, and mistreatment of innocent characters, but also because the message Aronofsky is sending about how humans are treating the planet is one we can't ignore. Biblical stories may just be stories for some, and may make for interesting allegory. But the environmental issues reflected here aren't something that are up for debate, nor can we afford to ignore them any longer. We're growing ever closer to a point-of-no-return on the climate change issue, and, as Aronofsky referenced, Trump's pull-out of the Paris Agreement could lead to intense ramifications. The past few months have seen a number of hurricanes destroy entire islands, with the island of Barbuda evacuated and thus uninhabited for the first time in 300 years.

So even if mother! is a tough watch, it's a necessary one to help spread the truth of climate change.

More like this
The 'Lady Chatterley's Lover' Book Leaves Us With A Troubling Question
By Catharina Cheung
The 'Love, Lizzo' Harry Styles Scene Is Just 1 Moment That Made Fans Feel Seen
By Brad Witter
Yes, That's Lindsay Lohan's Sister Singing In The 'Falling For Christmas' Movie
By Radhika Menon
Keke Palmer Paid Tribute To "Other Half" Darius Daulton After Announcing Pregnancy
By Jake Viswanath
Get Even More From Bustle — Sign Up For The Newsletter