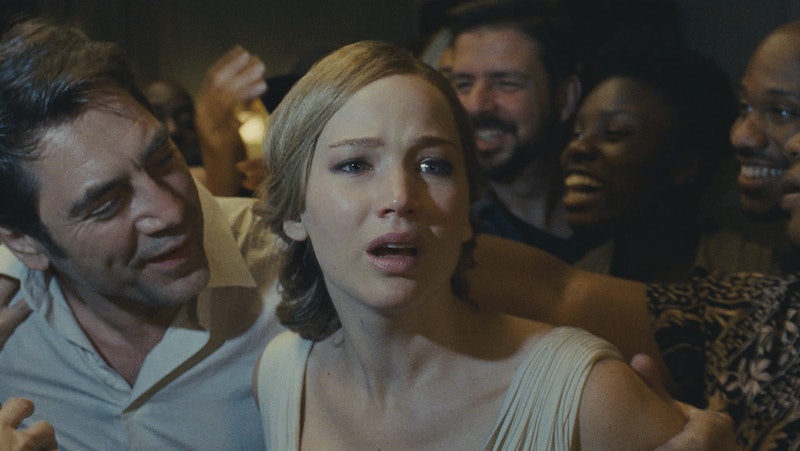 Hell hath no fury like a woman scorned, goes the saying. But what about women who just crumble under pressure? Or women who lose control out of an act of revenge? Whatever the reason, we love watching ladies lose their sh*t on-screen, as proven by the latest cinematic representation of a woman slowly coming undone, Daren Aronofsky's mother! The film stars Jennifer Lawrence as a young wife whose poet husband and his adoring fans lead to her epic unraveling, but the character is just next in a long line of women who have gone crazy on film, all for audiences' enjoyment. On the surface, watching a woman become emotionally unstable might seem sexist, like we're feeding into a stereotype of unhinged, hysterical women. But in reality, the trend of on-screen women losing their cool actually helps real women in the long run.

Without spoiling mother!, the basic premise is that mother (Lawrence) and her husband, played by Javier Bardem, live a secluded life in a quiet house until, one day, strangers, home invaders, and crazed fans infiltrate their peaceful abode. The entire experience leads to mother's total undoing. She begins hearing things that shouldn't be possible and seeing things that make her question her reality. Self-doubt and paranoia begin to consumer her. Escalating her breakdown is the fact that Bardem's character acts like everything is perfectly normal and fine.

Elements of gaslighting definitely come into play, as do stereotypical masculine reactions to a woman's emotions. Mother worries that too many people are entering their house and wrecking her hard work, while Him brushes it off as nothing she should be concerned with. She's make to feel more crazy for feeling protective of her own home and the life she wants to live.

The unraveling in mother! is part of a fairly large trend of "crazy" women on screen. Recent examples include the amnesiac alcoholic in Girl on a Train, the death-faking schemer in Gone Girl, and Aronofsky's own murderous ballerina in his film Black Swan. But audiences have adored watching stories about crazy women for decades before as well, with films like Fatal Attraction, Basic Instinct, and Single White Female giving audiences a glimpse of just how "insane" women can get when their buttons are pushed in the wrong way. But is the enjoyment of watching women go nuts actually bad for women? Not necessarily.

One of the reasons Gone Girl resonated so much with women is because, as crazy as she was, many women felt like Amy Dunne was in the right; that her husband was a total tool, and that he absolutely deserved what he got. The element of revenge and righting a wrong were big factors into our enjoyment of the film. The same emotion is triggered in the film Carrie, where a brutalized young woman uses her abilities to punish the peers that have tortured her for so long. Lots of people have revenge fantasies, and while they may not be as brutal or detailed as in these films, we can all imagine what we'd do or say to a person who's wronged us in the past if given a chance.

Catharsis comes into play even when the movie doesn't contain an element of payback, though. Considering that women are expected to be the kinder, more pleasant sex, there's a ton of pressure on us to remain calm at all times. Just think about how often women executives are called bitches for asserting power, or how often men break up with women for being "crazy" simply because they don't want to be a doormat. Or how about how Hillary Clinton was expected to keep her cool during the presidential campaign, yet all the while an out-of-control madman went into crazed tirades behind his podium. From Elizabeth Warren to Nancy Pelosi, aggravated female politicians are held up to emotional standards their male counterparts are not.

As women live under ever-growing pressure to not lose their cool, a slow boil begins, and one day, the lid may pop. So watching women go totally bonkers in movies not only offers female viewers a bit of schadenfreude, it also makes for a cathartic viewing experience. It shows us that we're not alone, and that hey, maybe it's time we should stop taking this crap. Perhaps if women stop putting up with the "smile now, scream later" tactic, one day a female presidential candidate will be able to get intense during a debate and not be called crazy. And maybe, by seeing women totally lose it on screen, men's eyes will be open to the pressures that put women in those positions in the first place.

Naturally, men might experience these films in a completely different way, particularly those that feature the stereotypically oversexed wannabe girlfriend like Fatal Attraction, Swimfan, or The Crush. But those films are more pulpy fun, whereas movies like Gone Girl, Girl on a Train, and mother! have a lot to say about how much societal pressures play a role in a woman's unraveling.

So don't feel bad if you enjoy watching another woman completely lose her mind in a movie. Whether it makes you feel better because you can reign it in, or because just for a couple of hours, you feel like you can explode too, watching these women only gives us a greater range of female characters on screen. And I'd much rather see that then a bunch of calm, stoic ladies whose only redeeming quality is that they keep their sh*t together. Goodness knows none of us ever do.