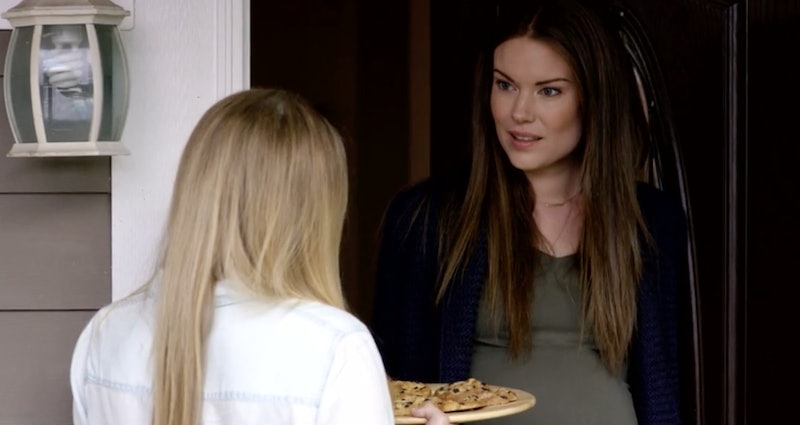 Labor Day brings the last long weekend of the summer, and that means one thing: staying inside on the couch and watching 72 hours straight of television. And one available choice for Sept. 4 viewing is Lifetime's original movie My Baby Is Gone!, the latest feature-length thriller from the network, but it's not one that's tied to a real-life case. There's no indication from the network or anyone who worked on the movie that. My Baby Is Gone! is based on a true story.

The film's premise — according to Lifetime, "pregnant Emily bonds quickly with her pregnant neighbor Kelly, but Kelly is faking it and plans to steal Emily's baby" — isn't all that realistic or relatable. But there is something interesting about Lifetime's latest original movie that's worth noting: My Baby Is Gone! is yet another movie from the network that's all about expectant mothers, and casts an expectant mother as the hero.

This is surprisingly common for Lifetime, which has premiered a good amount of thrillers about the process of becoming a parent. If somehow a future mother missed What to Expect When You're Expecting and instead just watched a steady diet of Lifetime original movies, she would come away with the impression that she will have to face deadly attackers and evil OBGYNs. She'd also figure that she should avoid adoption at all costs. Basically, around every corner, danger awaits.

2007's My Baby Is Missing started things off with a simple premise: the lead character had a baby, which, over the course of the film, went missing. By the end of the movie, she and her baby are reunited. Simple, straightforward, perfect for Lifetime and for a TV thriller. But in more recent years, the setups have become more complicated. Consider this summer's Nightmare Nanny, about a man who seems like an innocent nanny, but is really planning to infiltrate a woman's home and marriage. There was also The Good Nanny, about a normal nanny, working for a family that's eccentric and sinister.

You could also go into the archives and watch A Surrogate's Nightmare, about a woman who agrees to be her sister's pregnancy surrogate, but finds out that there's a plan afoot to steal the child. Having a child is so traumatic on Lifetime that the parody movie Will Farrell and Kristen Wiig made for the network was called A Deadly Adoption and spoofed the network's obsession.

It's actually an interesting trend that My Baby Is Gone! is a part of. Pregnancy isn't often associated with action, thrills, and chills, but it's a volatile time in anyone's life, and My Baby Is Gone! dramatizes an understandable fear.

More like this
'The Undeclared War' Spotlights The Real-Life Threat Of Cyber Attacks
By Maxine Harrison
Kimberly J. Brown & Daniel Kountz Looked Back On Their ‘Halloweentown’ Romance
By Stephanie Topacio Long
All The Sneaky Lindsay Lohan Movie Easter Eggs In Her New Ad, Explained
By Stephanie Topacio Long
'Friends' Creator Marta Kauffman Opened Up About Misgendering A Guest Character
By Grace Wehniainen
Get Even More From Bustle — Sign Up For The Newsletter