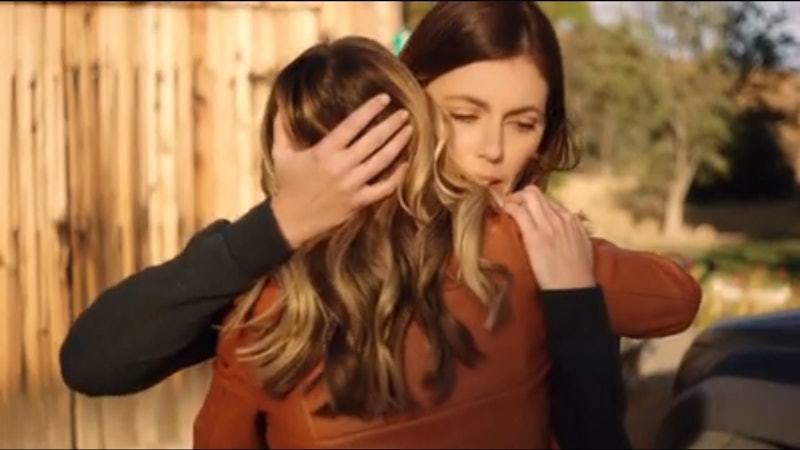 In Lifetime's new original movie, a woman named Sharon (Katrina Begin) is thrilled when she manages to locate and be reunited with her sister Raven (Katie Michels), who she hasn't seen since Raven was five. Thankfully, My Sister's Deadly Secret isn't based on a true story, because when Sharon realizes that the woman she believes to be Raven isn't actually her sister but an imposter with a nefarious agenda, things get scary pretty quickly.

While the initial meeting between the women seems like a positive thing, it's not long before Sharon begins to suspect that Raven isn't who she presents herself to be. The discovery seems to mark a potentially deadly turn in the story, but will the truth come out about who the woman pretending to be Raven truly is? What are are her motivations? Oh, and where is Sharon's real sister? This is a Lifetime movie, so it's probably fair to expect some overly dramatic (and perhaps downright silly) twists and turns before that happens.

In the meantime, if My Sister's Deadly Secret sounds like your cup of imposter-laden tea, you might be interested in checking out these four other Lifetime movies while you wait for it to air on November 16.

Very loosely based on a true story, Her Son's Secret follows a mother named Sarah (Olivia d'Abo) who lost her young son Matt (Mason Dye) over a decade ago in a drowning accident. Since his body was never recovered, however, Sarah has held out hope that he might somehow be alive. When "Matt" suddenly returns home, Sarah is overjoyed... until tragedy begins to strike those around him and she realizes that this might not be Matt at all.

Jane (Kelly Rutherford) is shocked when her sister Cassidy (Natasha Henstridge) shows up at her door after 16 years following a long stint in a psychiatric hospital. Jane's family is shocked since she's told them that Cassidy is dead, and given the intense distrust and skepticism that floats between the sisters, it's clear not all is as it seems. Who is Cassidy and why has she come back? You'll have to watch to find out.

Pretty much exactly as the title implies, The Wrong Husband focuses on Melanie (Charlotte Graham) and Derrick (Rick Cosnett), a super loved-up couple who seemingly have the perfect life. That is, until Derrick's identical brother Alex drugs him and assumes his identity unbeknownst to Melanie. His intentions are sinister and Melanie may not make it out alive, making this one of the most ridiculous yet most enjoyable Lifetime movies out there.

Twin sisters decide to spice things up for their 30th birthday by switching places without telling anyone in their lives. The problem is, one of them gets murdered and the other decides to keep up the ruse and assume her twin's life while still looking for her murderer. After all, the killer meant to end her life, so what happens if they find out they've murdered the wrong person?

No one can say that Lifetime doesn't know how to turn something as good as family into a downright nightmare. Comforting, no?

More like this
The Plane Crash In 'Dear Edward' Is Based On A 2010 Tragedy
By Grace Wehniainen
ITV's 'Maternal' Was Inspired By A Very Simple – & Unanswerable – Question
By Maxine Harrison
Gerard Butler Insisted On Adding This Pivotal Scene To 'Plane'
By Catharina Cheung
Jemima Khan Used Her Own Life As Inspo For 'What’s Love Got To Do With It?'
By Darshita Goyal
Get Even More From Bustle — Sign Up For The Newsletter
From hair trends to relationship advice, our daily newsletter has everything you need to sound like a person who’s on TikTok, even if you aren’t.