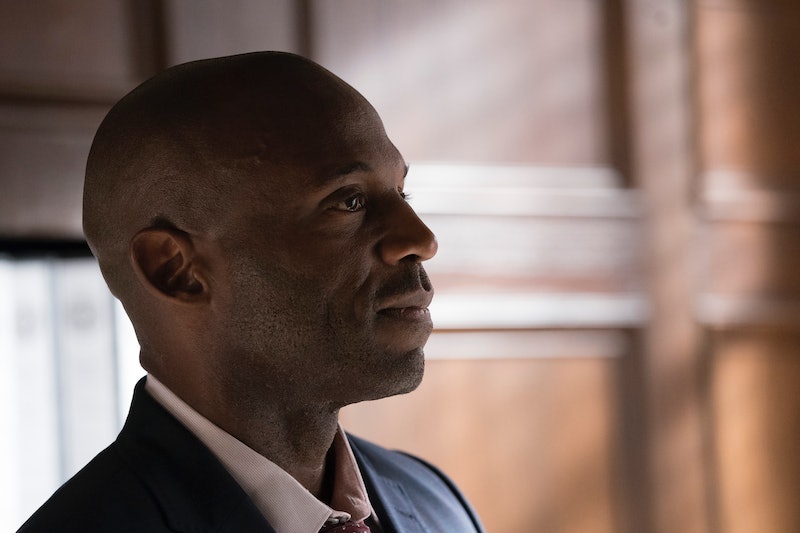 As usual, How to Get Away with Murder has multiple plots that are weaving together to form one big cluster of murderous mess this season. Gabriel Maddox is the only person under 40 years old with a flip phone, Frank concocted a plan to spy on Gabriel in his new apartment, and there were more clues dropped about this season’s main mystery murder in the last episode. A few people have been eliminated, but is Nate Lahey dead or will the victim be someone else? It’s not looking good for the fearless detective.

Nate continued his covert file investigation in Episode 2 with another trip to the DNA clinic. His source there revealed that the sample from Bonnie's son was taken from the U.S. Organization for Missing Children. He heads to the organization for more details, but quickly hits a road block when the director says she cannot give out any more information without a signature from the current district attorney.

Of course, Nate cannot reveal his investigation to interim District Attorney Miller because it involves files that aren’t supposed to exist and concerns Bonnie, who just started sleeping with Miller. Oh, the tangled web that HTGAWM weaves between characters.

Nate cleverly sticks the needed form among routine paperwork and distracts Miller by talking about Bonnie. As expected, Miller gets caught up in the conversation and signs the form without looking at it. This guy really shouldn’t be in charge, but a win for Nate is rarely a bad thing. Nate goes back to get the additional files and discovers that the boy was abandoned at a hospital nearly 20 years ago.

But, Nate is shocked to learn that there is video footage of someone who appears to be Bonnie abducting the child two days after he was born. Wait, what? So, this means Bonnie has been lying about her child's death, too, right?

This revelation sets up some intrigue for sure. What did Bonnie do with the child? It's understandable that she wouldn't want him around her abusive father, so maybe she found a safe place for her baby. Bonnie has known Annalise for a while, so if she was raising a child then Annalise would have known about it, right? There's not too many secrets that get by Annalise Keating.

If Bonnie's son is Gabriel Maddox, then why is he so interested in Annalise? Is he using her to get close to Bonnie so he can get revenge for feeling abandoned by his mother? And, what the heck does Frank have to do with any of this mess? Is he talking to Nate on the phone? There’s so many possible ways that this story can go.

Now that Nate knows this information, what will he do next? He’s invested in this investigation for an unknown reason, so it’s likely that he will confront Bonnie at some point. If he does, then the chances of him being the murder victim will be substantially higher.

Bonnie has kept this secret for two decades and she's a certified killer, so it wouldn’t be surprising if she takes Nate out this season. After all, being extremely nosy has never worked out for a person on this show. The episode’s flash forward to the snowy wedding reception murder eliminates several people, which makes it more likely that Nate is the victim.

The episode ends with Bonnie picking up baby Christopher and heading to the reception hall bathroom to clean blood off of his face. Suddenly, Michaela pops up and asks if Bonnie has spoken to Nate. Of course, Bonnie doesn’t answer and Laurel shows up to take Christopher. Michaela spots blood on Bonnie’s foot and asks what happened, which ends with yet another cliffhanger moment.

Bonnie looked pretty guilty when Michaela brought up Nate’s name and she completely avoided answering her question. And, based on her facial expression before smothering the person, she looked pretty nonchalant about their death. If she’s mad at Nate for trying to expose her secret, then it makes sense that she wouldn’t be emotional about his death.

But, this doesn’t explain why baby Christopher was present. Laurel doesn’t have a relationship with Nate, so why would he have the child? There’s also no reason for him to take Christopher unless he was trying to stop Bonnie from taking him somewhere. Laurel also seemed like she didn’t expect Bonnie to have Christopher, so who was supposed to have him? This show brings out everyone’s inner investigator and there’s always a mind-blowing twist to throw us off.

Nate’s fate remains to be seen, but it will be interesting to find out more information about Bonnie’s missing child. And, fans want to know exactly why Nate is so determined to uncover the truth. Was he just being a good friend who wants to reconnect his friend with her long-lost child? Or, is he somehow connected with Bonnie’s past and trying to uncover more information for his own sake? Only time will tell and thankfully we get new doses of HTGAWM every week.