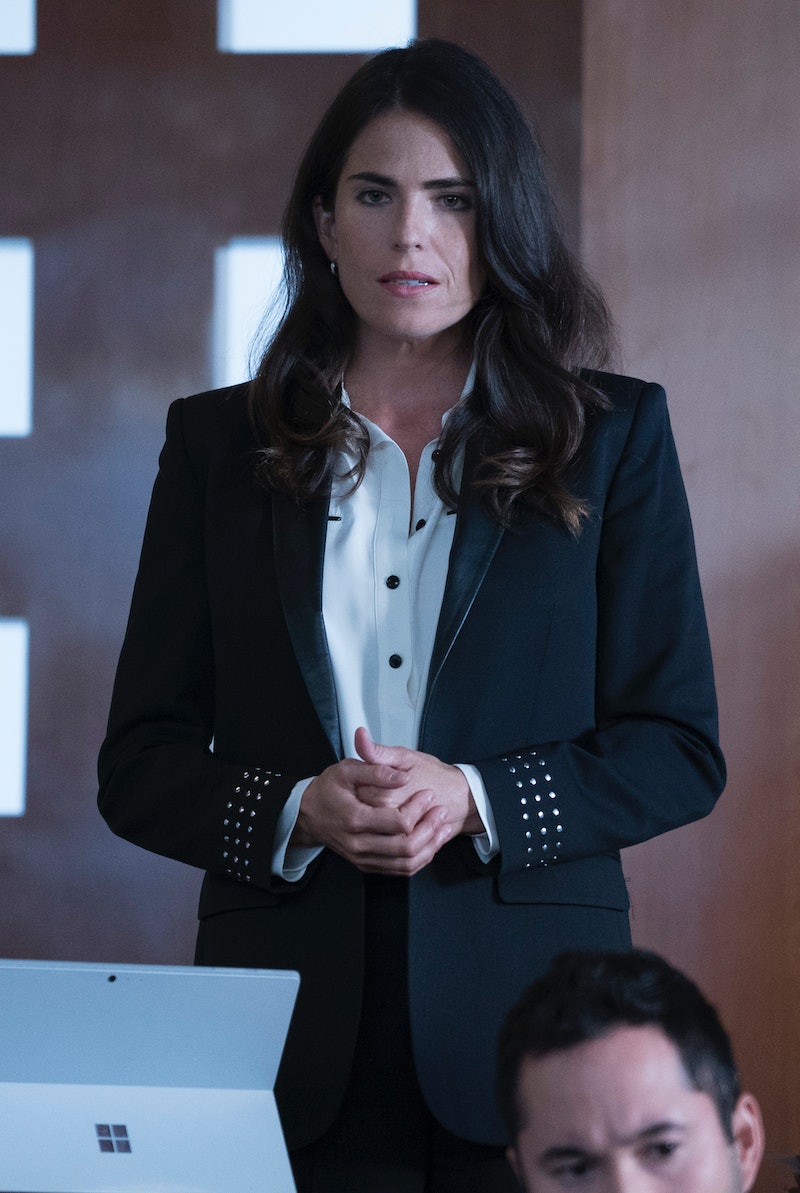 How to Get Away with Murder is only one episode into Season 5, but a lot of drama is already underway. There’s the issue of who is bleeding out (and possibly suffocated by Bonnie) in the snow and what could be going on with the mysterious new guy Gabriel Maddox. But, many fans are wondering if Laurel’s mother is still alive after a mysterious package arrived at Frank's house. It looks like Laurel may still have to deal with Sandrine’s shady ways.

In case you forgot, Sandrine’s “dead or alive” status was a major cliffhanger at the end of Season 4. Laurel’s father Jorge and Frank kept questioning her about Sandrine’s unexplained absence, which made sense because she was the last person to see her mother. Laurel’s nightmare revealed her intense argument with Sandrine and the deep scratches on her arm suggested a physical altercation went down.

Laurel knows a thing or two about murders, so all signs pointed toward her killing her mother. And, it would have made sense because Ms. Castillo did play an indirect hand in Wes' murder. Frank is always in Laurel's business, so it wouldn’t have been surprising if he knew about the murder and helped Laurel cover her tracks.

Now, Season 5 has hinted that Sandrine is still alive. Laurel received a package containing her baby baptismal gown and said it had to be from her mother. Asher then confirmed everyone’s thoughts and said “That means you didn’t kill her, then, so good news all around!” Oh Asher, sometimes you just have to shut up. In a personal conversation with Frank, Laurel said she wanted Sandrine to stay away from her and baby Christopher.

It was an interesting scene that brings up a lot of thoughts and questions. There was no return address on the package, so how does Laurel really know it came from her mother? Surely, someone else in her family could have found the dress and sent it to Laurel. Perhaps Laurel just said it was her mother to throw everyone (including Frank) off about the murder. Or, maybe Laurel really didn’t kill her mother and someone is tricking her into believing that Sandrine is still alive. How to Get Away with Murder makes it super hard to trust anyone and easy to over-analyze everything!

If the package is from Laurel’s mother, then she may have sent it to try to support her daughter from afar. The lack of an address means she doesn’t want to be contacted or located, so maybe Laurel doesn’t have to worry about an unexpected visit. But, you can’t keep a grandma away for too long, right?

Sandrine could pop back up this season, especially if she has any connection to Gabriel Maddox. A theory saying Gabriel and Laurel are related through one of her parents could be the catalyst for Sandrine to make an appearance. Is she the woman that Frank keeps referring to in his phone calls? It's unlikely but anything is possible.

But wait - there's more. What if Laurel's mom comes back and tries to kidnap her grandson? It wouldn't be the first time that he was held hostage by a grandparent. Sandrine might be person bleeding out in the snow. This would explain why Christopher is present in that mysterious scene. Of course, it's all speculation at this point but that's why watching this show is fun.

All signs point toward Laurel’s mom being alive but anything can happen in this series. No matter what happens, if Sandrine is indeed alive, then it’s almost a given that she will come back. And, if she has died, there will be a shocking revelation of her last moments. HTGAWM doesn’t leave loose ends hanging, so the mystery of Sandrine will be probably be explored more throughout the season. It’s going to be a thrilling rollercoaster of salacious secrets and we are ready for the ride.