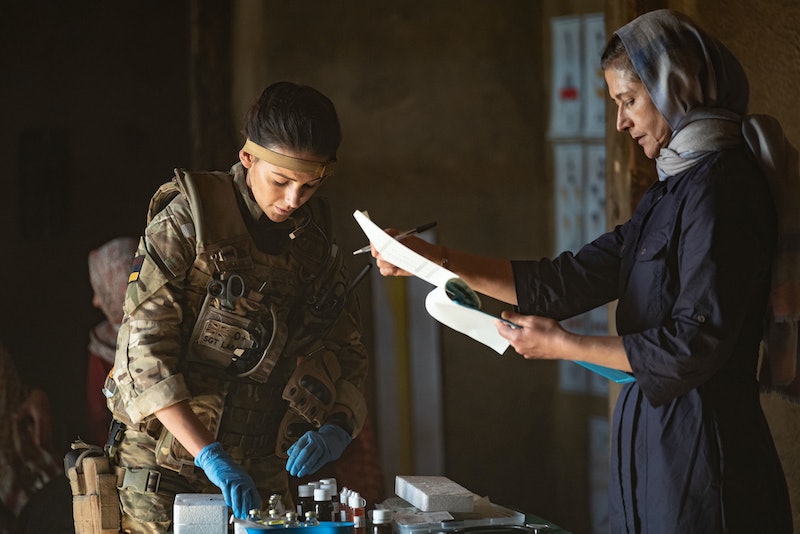 While Michelle Keegan, Rolan Bell, and Sean Ward have all returned for series four of Our Girl, there’s a ton of new faces in this season. As well as new recruits joining 2 Section, Badria Timimi has joined the show as hospital administrator and central character Dr Bahil. Our Girl has a standard of telling realistic and shocking stories. It’s what keeps viewers coming back and maintains the integrity of the show. But is Dr Bahil based on a real person? It may be an entertainment show but the cast and crew put a lot of effort into making each episode as believable as possible and that starts with the characters.

At the start of series four, viewers were introduced to Dr Bahil as the determined hospital administrator and candidate in the upcoming elections in Kabul. This has made her a key target for some very dangerous people.

The research that goes into the character development and storylines in Our Girl is extensive. At a screening for the new series back at the beginning of March, creator and director Tony Grounds explained that they “have military advisors on set at all times.” And Rolan Bell who plays Kingy, said: “We get a lot of stories explaining things that have actually happened from our military advisor and that really helps us get into the zone of it and understand how serious and traumatic these situations can be. That’s a big part of it.”

Grounds also highlighted the importance of having this kind of guidance on set. “They’re all real stories. Obviously we concertina them, they didn’t all happen to one section. But that’s why we wanted to go back to explore Afghanistan,” he said, “because we are training and mentoring. Since we pulled out in 2015 the Afghan National Army and Police have lost over 50,000 men. So, it’s an ongoing conflict.”

Despite all the real-life research that goes into the series, however, Our Girl is fictional and so are all the characters. There’s no doubt that there are many medics who’ve done the work of Dr Bahil but she isn’t based on one person in particular.

Dr Bahil is central to the storyline in season four of Our Girl. Her distrust and annoyance at Lane comes from the fact that she sees the damage that conflict has done and continues to have in her country. While there’s no active war in season four of Our Girl it highlights that the fight is ongoing which is why Dr Bahil’s husband was killed for speaking out and why Dr Bahil is a target.

Our Girl airs every Tuesday on BBC One at 9 p.m.