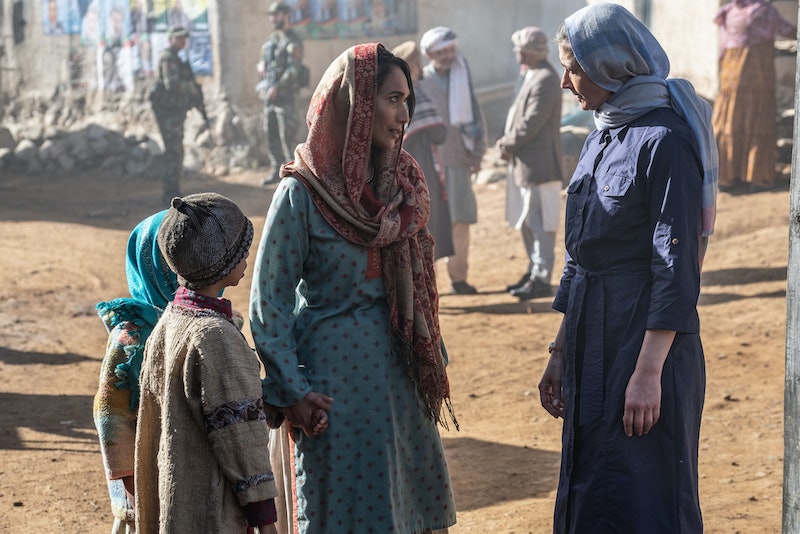 Our Girl returned to BBC One on March 24 and the first episode saw Sergeant Georgie Lane (played by Michelle Keegan) go back to Afghanistan after the death of her fiancé Elvis. Season four welcomes in a whole host of new characters with their own tales to tell, including hospital administrator Dr Bahil (played by Badria Timimi). The doctor is a Taliban target, with Lane and 2 Section as her protection. However, it’s about to become very clear why warlord Aatan Omar is looking to track her down...

Spoiler alert if you haven't watched the explosive first episode yet, which saw Lane left hanging in an overturned car, after a suicide attack aimed at Dr Bahil. At the end of the episode, Lane learns that the doctor's husband was a prominent politician, killed by the Taliban, before he could stand in the upcoming election – so, despite immediate threats, she plans to stand in his place. She also finds out that the people who killed Dr Bahil's husband also killed her finacé, Elvis. Despite the two women's relationship appearing fraught so far, it seems they may find common ground in their shared enemy. In episode two, she will leads efforts to support a medical outreach program, presumably Dr Bahil's.

Dr Bahil, and her husband, will prove to be central to the plot of Our Girl series four, as the doctor is determined to fulfil her late husband's legacy whatever the cost.

In the upcoming episodes, as we've come to expect from Our Girl, there will be further military drama and danger – don't miss the second instalment (airing March 31), when plans are thrown off course for Dr Bahil, Lane and 2 Section.