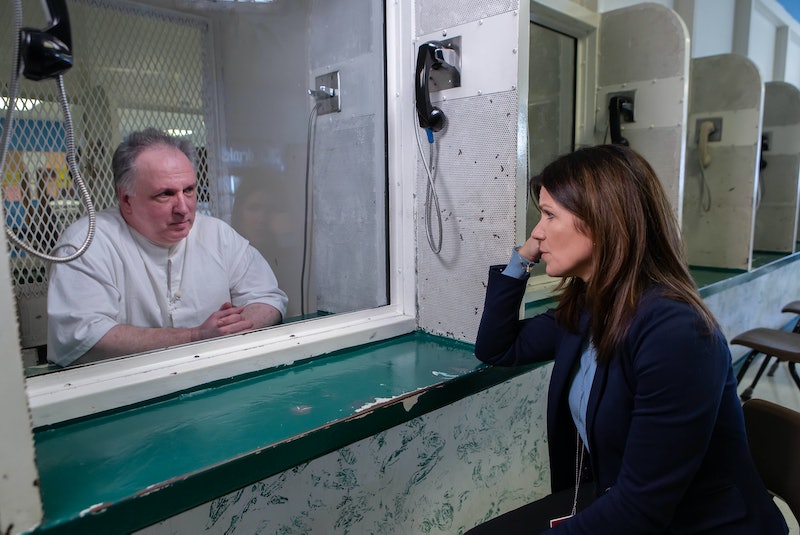 Part of ITV's Crime and Punishment series, Susanna Reid's Death Row: Countdown to Execution is set to cover the truth of what serving time on death row is genuinely like, and the effect it has on those who have been sentenced. In the first episode, Reid will be speaking to a member of the 'Texas 7' — a group of inmates who escaped prison in December 2000 and went on to murder a police officer. So is Patrick Murphy still on death row, and what part did he play in the crime that put him there?

Despite his execution date initially being set for 28 March 2019, Murphy is still on death row after being granted a reprieve after his lawyers submitted an appeal against the Texas Department of Criminal Justice (TDCJ), as the Texas Tribune reports. In this appeal, Murphy's lawyers stated that his religious rights had been violated "by not allowing a Buddhist chaplain into the execution chamber with him." Because the TDCJ didn't reply to Murphy's numerous appeals, his lawyers "then took the issue to the courts, claiming the policy violated his rights."

The U.S. Supreme Court eventually stopped his execution from taking place, two hours before Murphy was supposed to be placed in the chamber. "As this Court has repeatedly held, governmental discrimination against religion — in particular, discrimination against religious persons, religious organisations, and religious speech — violates the Constitution," Justice Brett Kavanaugh wrote, according to the Texas Tribune, "in a concurring opinion".

Originally serving "a 50-year sentence for aggravated sexual assault" as iNews reports, Murphy was one of six prisoners dubbed the 'Texas 7' who escaped the John B. Connally unit — a prison in Kenedy, Texas. The seven planned to flee to San Antonio, but first hit up "a sporting goods store" where they "bound and gagged all the staff and stole 44 guns, ammunition, and $70,000 in cash."

According to iNews, Murphy acted "as lookout and getaway driver" for the group. When police officer Aubrey Wright Hawkins arrived, iNews reports, "he was ambushed, shot 11 times and run over as the gang escaped. He later died in hospital."

All seven were convicted and sentenced to death under the Law of Parties, which "allows for a person to be held criminally responsible for another's actions if that person acts with 'the intent to promote or assist the commission of the offence and solicits, encourages, directs aid, or attempts to aid the other person committing the offence'," according to iNews.

While the first episode of this docu-series will tell of Murphy's crimes, Reid aims to focus more on what he is thinking and his stance on whether the punishment fits the crime he committed. She will also be gathering opinions and comments from those around the town of Huntsville, Murphy's lawyers, and the family of the victim not only to discuss the impact of Murphy's crimes and his eventual execution, but what it's like to live in a town with such a substantial amount of inmates waiting on death row.

"This is a journey to a pretty bleak place, a maximum security prison, where there are men being held who know that they are facing a sentence of death," Reid told ITV in a press statement. "I just wonder what [Murphy] is thinking, whether he thinks he deserves punishment, whether he will ask for forgiveness, and what his thoughts are on the years and years he has spent in prison."

The first episode of Death Row: Countdown To Execution airs tonight on ITV1 at 9 p.m.