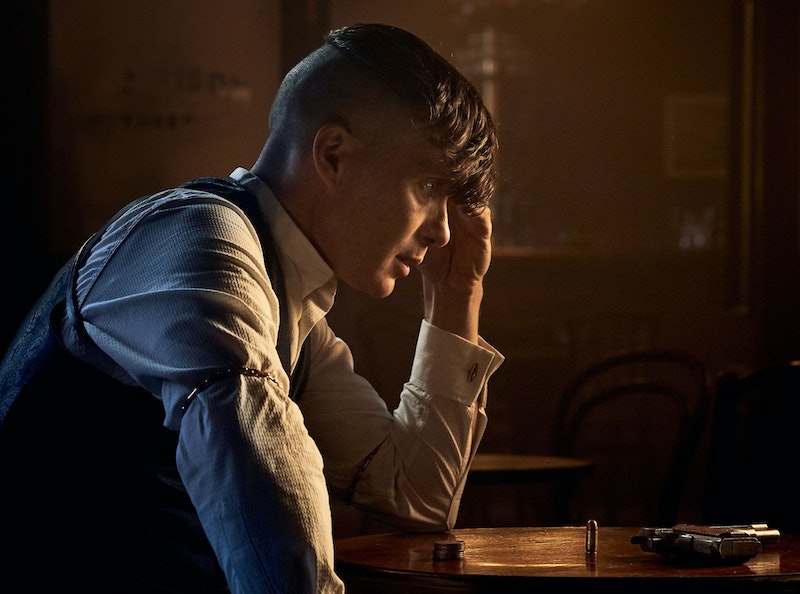 BBC's Peaky Blinders has become pretty well-renowned for its immersive style. From set and costume design to detailed character studies, the series transports viewers to a post-World War I Britain with ease, as well as providing a gripping story on a notorious 20th-century criminal gang. But is Peaky Blinders based on a true story, and what will the fifth instalment of the series explore?

If you're at all familiar with British crime history, you may have heard of the Peaky Blinders. A real 19th-century gang, the Blinders caused carnage on the streets of Birmingham. As GQ writes, their name "is said to be derived from the gang stitching razor blades into the peak of their flat caps so they could use them as weapons." Although, the magazine also notes that Professor Carl Chinn said that this "is a rather unrealistic scenario" to the Birmingham Mail, and that Peaky Blinders was a nickname for flat caps.

"[A]ny hard man would tell you it would be very difficult to get direction and power with a razor blade sewn into the soft part of a cap. It was a romantic notion brought in John Douglas's novel, A Walk Down Summer Lane," Chinn said.

Despite the mixed history and mythology of the Peaky Blinders, creator Steven Knight used what is known of the gang to influence the fictional Shelby family, led by Thomas (played by Cillian Murphy). Traversing their way through the early 20th century, the Shelby's encounter the social and political norms of the time while causing havoc and evading the police.

Starting in 1919 when the series first began, the next instalment will take place in the late 1920s, right in the throes of the financial crisis. "The story of the Peaky Blinders and of the Shelby family gets woven into the political fabric of Britain and Europe as the 1920's end and the thirties begin," Knight told the BBC. "Tommy Shelby faces the darkest force he has ever faced and his struggle is as relevant today as it was then."

As the BBC synopsis reads, the family are interwoven into the issues presented by the financial crash, where "opportunity and misfortune are everywhere". While the storyline is still being kept under wraps for now, it seems that Michael (played by Finn Cole) may be one of the main reasons why the Shelby's "hard-fought criminal empire" is in peril.

"So I start off in New York. There's the financial crash in the 1920s, and Michael may or may not have something to do with that," the actor recently told Esquire. "He's invited back from America and as a family we have to reassess what the next move is, because we've lost a lot of money. I think Tommy blames Michael for it, but that's not necessarily the full story."

There's also the possibility that Michael could be taking over Tommy's spot as the head of the family this season, which will be a total must-watch. "I think that it's been included into the scripts for a long time," Cole said. "I don't necessarily think that in season two, when I joined, that was the case, but we've kind of grown to recognise that Michael is more than capable of doing the job that his cousins do." He added:

"And as you say, through his experiences and through his upbringing, he's colder, harsher and more able to make their ruthless decisions. That's what it is like to be a leader of a gang like that. But it could also be a downfall at times, too. That'll make it very interesting."