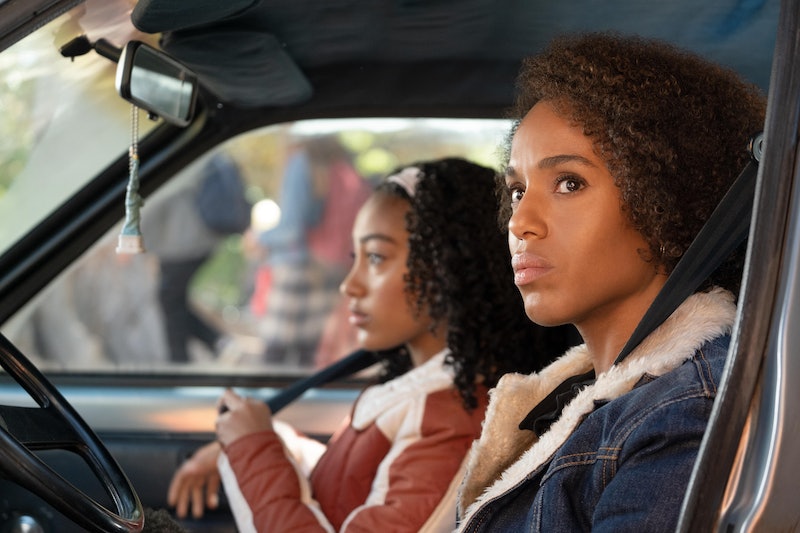 Spoilers ahead for Little Fires Everywhere. Viewers knew that Mia was hiding secrets on Little Fires Everywhere, but no one (who didn't read the book) was expecting the jaw-dropping cliffhanger revealed at the end of the fifth episode. Elena spent the whole episode trying to uncover information about Mia's life before Shaker and even tracked down Mia's parents. That's how she learned that they hadn't seen Mia since she got pregnant, and that they didn't consider Pearl to be their grandchild. According to Mia's mother, the baby wasn't even Mia's.

The show is giving viewers (and Pearl) information about Pearl's backstory in drips and drabs. For five episodes we've seen Mia have nightmares about a man on the subway (played by Grey's Anatomy's Jesse Williams), and in Episode 5 Mia told Pearl that she met Pearl's dad on the subway. Is it the same man? In the dreams, Mia is clearly afraid of him. He stares at her and follows her in what seems to be a menacing way. But when Mia described him to Pearl, she called him charming and intelligent, saying only that "he just wasn't interested in being a parent."

Later, in a phone call to a friend, Mia worried that she didn't do the right thing keeping the truth from Pearl. Clearly there's more to Pearl's parentage than Mia has revealed. The book spells out the answer clearly, but we'll get to that in a minute. First, some speculation based on the series alone — which could always choose to go in a slightly different direction from the book.

When Elena spoke to Mia's mom, her mother said, "That baby was never going to be our grandchild. The baby Mia was carrying in that picture, it was not hers." Do they mean literally not hers, or do they just not want to confront the fact that Pearl is hers? Perhaps the father did something to Mia, and Mia's parents don't want to recognize Pearl because they don't approve of the father or the situation in which Pearl was created.

Another theory is that Pauline Hawthorne — who took the photo of the pregnant Mia was the mother and that Mia was a surrogate. Elena read in an article that Pauline often took photos of "her community, her friends, and even her lovers." Maybe Mia was a friend who was carrying Pauline's child for her and then Mia couldn't go through with handing the baby over. Perhaps that's why Mia and Pearl have been on the run for Pearl's whole life.

It would also explain why Mia is so set on helping Bebe get her daughter back. Mia would then also have a complicated view on motherhood and who deserves to have a child and who doesn't. Mia is even funding Bebe's lawsuit. She's just that invested in reuniting the young girl with her biological mother. The books further explain why Bebe's fight means so much to Mia. If you don't want to know what happens in the novel, stop reading now.

In Celeste Ng's book upon which the Hulu show is based, Mia became a surrogate for a wealthy New York couple to make some much-needed money. But once her brother died, Mia couldn't handle the idea of also losing what she considered to be her child. She lied to the couple and said she had a miscarriage, and then she went on the run. She had Pearl on her own and kept her daughter's true parentage a secret. It seems likely that the man on the subway is the man from the wealthy couple, and Mia is afraid of him because she doesn't want him to take Pearl away. This is likely why she identifies with Bebe's own story of wanting to get her daughter back. She understands that fear of loss on a personal level.

But now that Elena is close to the truth, everything Mia has built on a foundation of lies and secrets could come crashing down.