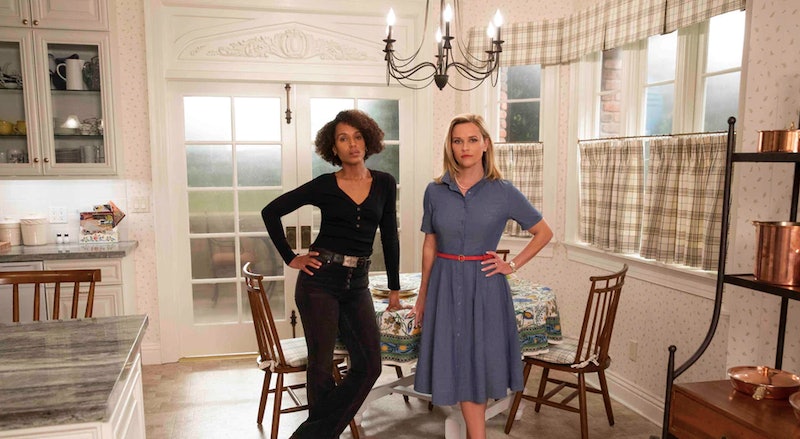 Hulu's Little Fires Everywhere, the TV miniseries adaptation of Celeste Ng's 2017 novel of the same name, premiered on Mar. 18, and it already has fans waiting to find out what's coming to Shaker Heights, Ohio. If you're not familiar with the original novel, you might be wondering: Should you read Little Fires Everywhere before watching the show? There are some pretty major changes between the book and adaptation that are worth exploring in the novel.

Little Fires Everywhere centers on Elena (Reese Witherspoon), a suburban mom of four with a picture-perfect life, and Mia (Kerry Washington), the artist and single mother who has just begun to rent a home from Elena. When Mia helps an undocumented coworker settle a custody dispute over her lost child — a baby Elena's friends have already adopted — the two neighbors become embroiled in a legal battle as their teenage children's lives become similarly enmeshed. As the opening to Little Fires Everywhere reveals, Elena's home will be set ablaze before the novel ends, but by whom, and why, remain to be seen.

Hulu's adaptation deviates from the book in some pretty major ways, while keeping the basic story intact. (From the first episodes on there have already been major changes to Izzy's sexuality and Mia's race.) Before you worry that Ng — who cameos in the show and served as its executive producer — isn't happy with the changes Hulu made to Little Fires Everywhere, you should know that the author was perfectly happy to have the series' creators adapt her novel in unexpected ways.

"I'm really not [feeling] possessive of it," Ng told the L.A. Times in an interview published Mar. 17. "I wanted it to have space to be its own thing."

Now, purists will tell you that you should always read the book first, before you even dream of watching the film or TV adaptation. And in the case of Little Fires Everywhere, you really should consider reading the book before you watch the miniseries. Changes are afoot, and you're going to want to keep your eyes peeled for how the book and show differ.

You can watch Little Fires Everywhere on Hulu today.

More like this
Netflix Shut Down 'Bridgerton' S3 Rumours About A “Very Dark” Storyline
By Bustle
Pamela Anderson's Sons Brandon & Dylan Have Their Own Hollywood Careers
By Arya Roshanian
Wait, Is Barney Stinson Related To Sophie On 'HIMYF'?
By Gretchen Smail
Pamela Anderson’s Dating & Marriage History Could Be Its Own TV Series
By Jake Viswanath
Get Even More From Bustle — Sign Up For The Newsletter
From hair trends to relationship advice, our daily newsletter has everything you need to sound like a person who’s on TikTok, even if you aren’t.