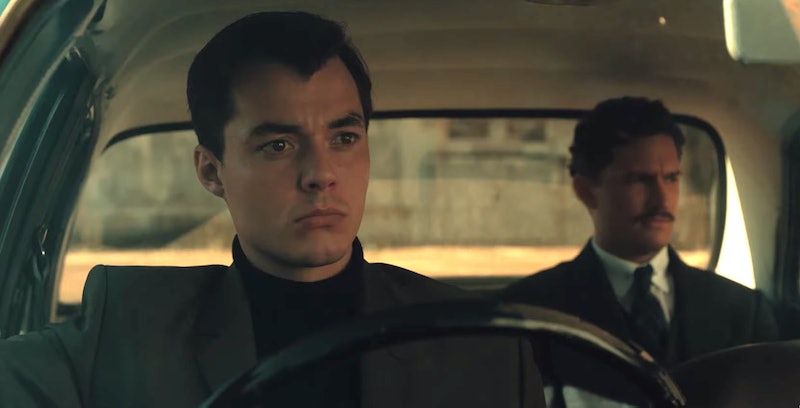 Now that Gotham's series finale has come and passed, executive producers Bruno Hellner and Danny Cannon are teaming once again for Epix show Pennyworth, which isn't a prequel to Gotham so much as it's an adjacent story unfolding in a similar universe. Whereas Gotham traced the origins of DC characters like Bruce Wayne before he became Batman, Pennyworth follows Wayne's iconic butler, Alfred Pennyworth (played here by Jack Bannon) in 1960s London. In fact, Cannon and Heller have been quite clear that the two shows are consciously separate.

"They're different shows. I think these things do stand alone," Cannon said during the Television Critics Association's winter 2019 press tour, per The Wrap. Added Heller: "It's very much not a companion piece to Gotham. It's a different genre and different format."

Instead of focusing on Batman characters like Penguin, Catwoman, and the Joker, Pennyworth centers around Alfred, a former British soldier, and how he came to create the company Pennyworth Security and begin working with Thomas Wayne. So if you've you ever wondered how Alfred ended up as a butler in Wayne Manor, Pennyworth should have all of your answers.

When it comes to the villains in Pennyworth, Cannon told Syfy Wire at San Diego Comic-Con that they were able to get rather imaginative and deviate from the comics. "We can mine great literature and great British history for our villains, we don't have to rely on comic books of the '40s," he explained. And as Ben Aldridge, who plays Thomas Wayne, told the outlet, they did the same for the good guys: he said Heller had "free reign" to "flesh out and invent a backstory for Thomas." This deviates from typical Batman stories, in which Thomas has mostly been shown in flashbacks or memories, since he and his wife Martha were murdered by Joe Chill when Bruce was young.

Of how the show came about, Cannon told Syfy that Warner Bros. approached him and Heller specifically about taking on another Batman-related project, since despite the recent boom of superhero movies and shows, there are still a lot of untold stories left to mine. As Cannon and Heller are both British, they "gravitated towards Pennyworth, who really didn't have a backstory," Cannon said.

Just as Sean Pertwee's Alfred in Gotham, Jack Bannon's version in Pennyworth will use more deadly force than some fans might be used to seeing. But based on Heller and Cannon's comments, it doesn't seem like Bannon's Pennyworth is a younger version of Pertwee's. Instead, it's just another interpretation of the beloved character.

So although Pennyworth and Gotham share the same comic origins and creators, the connections seem to stop there. Instead, get a dose of James Bond in your Batman story when Pennyworth premieres on Epix July 28.