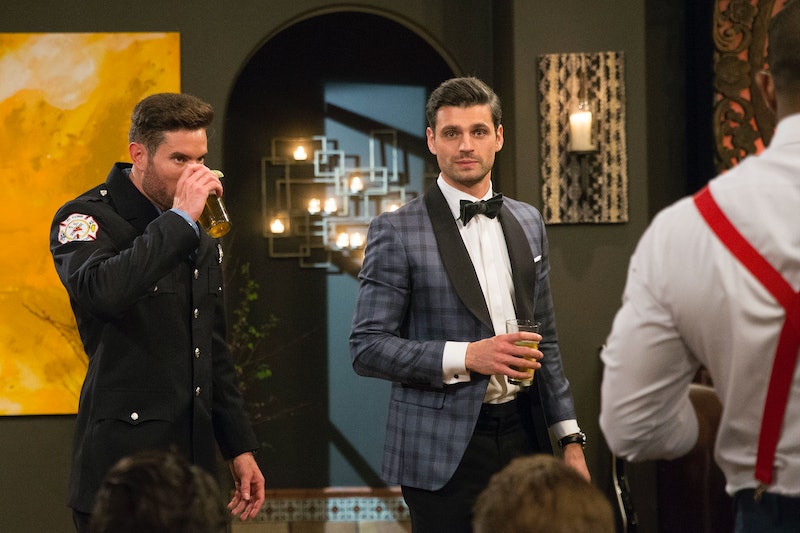 A Bachelorette frontrunner can be spotted a mile away. He's the guy slyly looking good on a group date, stealing kisses with the lead and always getting romantic orchestration under his voice when he talks. Peter Kraus screams frontrunner. Peter's one-on-one time with Rachel Lindsay is consistently shown, he turns the lead into a smitten kitten and even manages to look hot while eating a burrito. I want to know if the 31-year-old business owner, personal trainer, and former model is off the market. So, is Peter Kraus single after The Bachelorette? His social media is filled with family, working out... and not a lot of roses.

Peter's relationship status is really anyone's guess. He could be engaged to Rachel (it wouldn't be shocking), he could be single and ready to mingle (perhaps as the next Bachelor), or he could even be off the market with some non TV lady. His Instagram shows that he's been keeping busy with friends, family, and gym equipment. Peter seems to have positive feelings about his time on TV, but it's clearly not his sole focus. But, of course, that's what the show demands of a contestant post-show but pre-finale airing. So, let's take a look at his Instagram and sleuth what we can.

Peter has been racking up the uncle points since returning from the show. He posted this adorable photo of himself doing uncle duties. One of the hashtags he uses is #Madison, the midwestern boy has returned to the midwest after (possibly) traveling the world for love. This could either mean he’s telling his family about his new fiancée or healing with his family from a breakup. I think his jump back into life feels like that of a single man, but I’m really the weatherman of Bachelorette predictions here. It looks like rain, but weathermen are known for getting things wrong.

As this montage of a shirtless Peter shows, he’s back to putting time into his fitness training center “Worth Personal Training." Peter seems more focused on growing his business and a little less focused on a big move to Texas. This could be a sign that he’s single and staying in Wisconsin, rather than engaged and about to move to be with Rachel.

Being on a reality show can be exhausting, you’re away from friends and family and thrown into a high stress situation. Peter seems to be spending his time post show relaxing and doing what he loves. Look closely, is this the golfing smile of a single man or of a man recently engaged to a beautiful and powerful lawyer? Honestly, it could go either way. It’s clear that regardless of status, he wants to relax post show.

Peter, like most good midwestern boys, appears to have a nice group of midwestern friends. Post show, while most contestants parade their new TV friends all over social media, Peter mostly has been hanging with non-television folk. Perhaps the pain of a recent heartbreak has lead him back to his old friends. Or the joy of putting a ring on Rachel’s finger. I’m back and forth and back and forth about it.

#TBT All The Time

Peter loves a good throwback photo. He spends a lot of time reflecting on the journey that lead him to smooching on TV. He hilariously revealed recently that his yearbook goal was to be on The Bachelorette. Peter wanted to be famous in "one way or another." With that goal achieved, he may be happy and single now that he’s famous. Or engaged and famous. But it all could be a sign that getting engaged wasn’t the only reason for doing the show and he may be single still.

Celebrating His Time With Rachel

It’s become the new normal that contestants celebrate their love story (with or without a happy ending) on social media. Peter posted this sweet photo of him and Rachel’s date. Clearly, whether ending in roses or thorns, he’s pleased with his time on the show. While most photos suggest he may be single and back home, this one hints that it could have ended well — this is one of those.

While many are excited about a possible Peter and Rachel coupling, others are hopeful the handsome Peter is still single and available to be the Bachelor. Either way, at the end of the day, I don't think Peter will stay solo for long. Whether on TV this season, on his own season, or without cameras, this handsome man has love written all over his future.