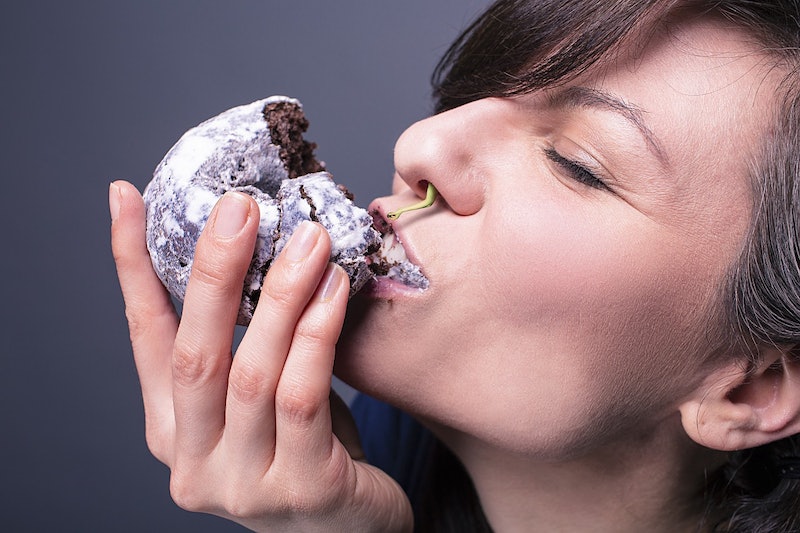 As a child, your mother probably told you repeatedly not to pick your nose and eat it. Looks like mom may have been wrong about this one because new research indicates that picking your nose and eating it good for you. I'll wait a minute while you digest that piece of information. OK, here we go, because, boogers. The study, published in the journal Applied and Environmental Microbiology, concluded that noshing on your boogers, or more specifically, their mucus, could help prevent cavities and illness.

The Telegraph reported, "Scientists at a number of universities including Harvard and Massachusetts Institute of Technology say parents should not discourage their children from picking their noses because they contain 'a rich reservoir of good bacteria.'"

While many things your body does naturally are considered gross in modern society, most of these icky behaviors actually serve a purpose in determining the state of your overall health, so they're not really icky at all.

"Nature pushes us to do different things because it is to our advantage to have certain behaviors, to consume different types of foods," study co-author Dr Scott Napper, professor of biochemistry at the University of Saskatchewan, Canada, told the Telegraph. "So maybe when you have an urge to pick your nose and eat it, you should just go with nature."

I mean, this primate has it down, and primates aren't all hung up about what their friends think of their behavior. Is the key to health and happiness having a little boogie snack every now and then?

"From an evolutionary perspective, we evolved under very dirty conditions and maybe this desire to keep our environment and our behaviors sterile isn't actually working to our advantage," Napper told the Telegraph.

Because a lot of disease can enter your body via your mouth, keeping it in tip top shape could help ward off respiratory infections and other illnesses. The study notes that "One key defense mechanism on all moist epithelial linings, such as the mouth, gastrointestinal tract, and lungs, is a layer of thick, well-hydrated mucus. The main gel-forming components of mucus are mucins, large glycoproteins that play a key role in host defense."

In the scenario, you my friend are the host. Additionally, the Independent reported that evidence suggests the mucus in snot could defend against respiratory infection, stomach ulcers, and HIV. Wait — there's more. Nose pickers and eaters may be happier, healthier, and more in tune with their bodies than non nose pickers.

"And eating the dry remains of what you pull out is a great way of strengthening the body’s immune system. Medically it makes great sense and is a perfectly natural thing to do,” Austrian lung specialist Friedrich Bischinger said in the Independent . “In terms of the immune system, the nose is a filter in which a great deal of bacteria are collected, and when this mixture arrives in the intestines it works just like a medicine.”

With the future of healthcare uncertain, isn't it nice to know you can help yourself? Think of your nose like a free pharmacy.

This information is at odds with previous nose-picking advice, which claimed that digging deep into your nostrils to excavate a treasure could make you sick, and spread germs. Though, I think the lesson from the anti-nose picking video published by Business Insider is to make sure your hands are clean, because dirty hands could introduce bacteria into your nasal cavity.

A quick internet search returns dozens of results in favor of, and against, nose picking for health reasons. So, what should you do? I think the ball is in your court here. If you think picking your nose is really gross, and eating it is even more gross, and you're generally a healthy person I think you can carry on with your nose-picking free lifestyle. If you're one of those people who loves watching videos of people popping zits online, your curiosity is getting the best of you, or you get sick a lot, and are prone to cavities, maybe this is worth a try. But, I am not, by any means, a doctor so this is really your call.

If you're of the wait-and-see mindset, the Independent reported that researchers are working on creating a gum and a toothpaste that works just like your real boogers. There's no word when that will be on the market, but it's something weird to look forward to, and who doesn't love that?