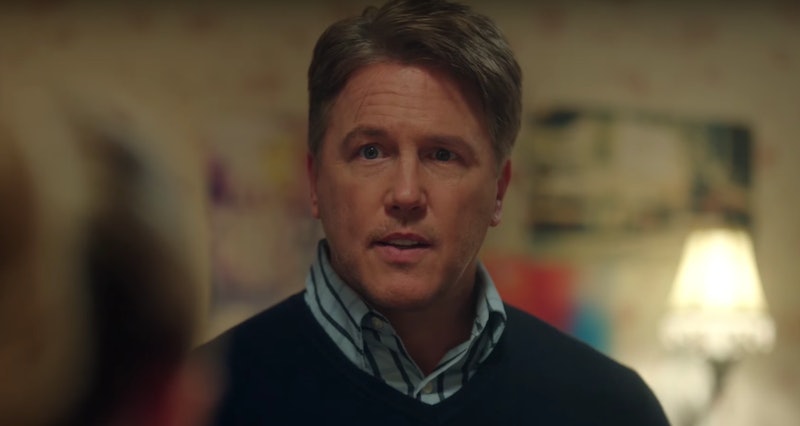 Riverdale may already be roughly halfway through its first season, but its mysteries are just about as tightly wound as when it first premiered. Among the many secrets still lurking beneath its brooding small town surface is what exactly happened to Polly, Betty's older sister who'd been mysteriously sent away. In the March 2 episode, "Faster, Pussycats! Kill! Kill!" we finally get to hear Polly's side of the story, but it's a much different account than the one her parents have been spouting. Of course, they can't both be right. So, is Polly lying on Riverdale, or are her parents? Before I answer that, let me catch you up to speed, because with as much drama as Riverdale brings, there's a lot of evidence to sift through.

In the Feb. 23 episode, "Heart of Darkness," Betty's dad, Hal, tells her that they took Polly to get help after discovering she was suicidal. He says that she's "sick" because of what Jason did to her and warns Betty to stay out of it. Turns out, whatever happened between Polly and Jason was just the final straw in a long-standing feud between the Coopers and Blossoms. Long ago, the families had worked in the maple syrup industry together, but great-grandfather Blossom decided he wanted the profits to himself and murdered great-grandfather Cooper to cut him out of the business. A heated Hal then says he'd do anything to protect Polly, prompting Betty to add her parents to the list of suspects for Jason's murder.

In "Faster, Pussycats! Kill! Kill!," she and Jughead decide to pay Polly a visit at Sisters of Quiet Mercy, a "home for troubled youths" where Polly has apparently been staying. To Betty's surprise, she finds out Polly was not only engaged to Jason — a reveal from "Heart of Darkness" — but is now pregnant with his child. Polly says the two had arranged to run off together and that Jason had stowed a getaway car on the other side of the river. But the Coopers found out about their little escape plan, and on the day that Polly was supposed to meet Jason, some men from Sisters of Quiet Mercy showed up and took her away. To make matters worse, she didn't even know Jason was dead.

That's about all Betty's able to get out of her before their mother, Alice, shows up and separates them. Once home, the Coopers insist that Polly is delusional and accuse Betty of acting the same. Later, while trying to make sense of things, Betty remembers the car Polly mentioned and enlists Jughead to go with her and check it out. Low and behold, there is a car on the other side of the river, and it's got Jason's letterman jacket inside. Score one for Polly, because that means at least some part of her story is true.

After Betty and Jughead alert the police about Jason's abandoned car — because it is, after all, a crime scene — they return to find someone has torched it. They go back to find Polly, only to discover she's disappeared, closing the episode on yet another major cliffhanger.

So, who's telling the truth? Though Betty admits Polly was a little off when she went to see her, the fact that she was being honest about the car makes her more believable. Her story also lines up with what Cheryl told the police. She helped Jason fake his death so he could get out of town, presumably to be with Polly. The Coopers, on the other hand, seem to tell as many lies as Riverdale has twists. They told Polly that Betty didn't want to see her, and didn't tell Betty that Polly was pregnant, so it's not a stretch to think they've been deceitful.

Riverdale is the kind of show that offers up 10 questions before it gives an answer, so it'll likely be some time before it unspools the secrets surrounding Polly's backstory. But between her and her parents, I'm decidedly team Polly.