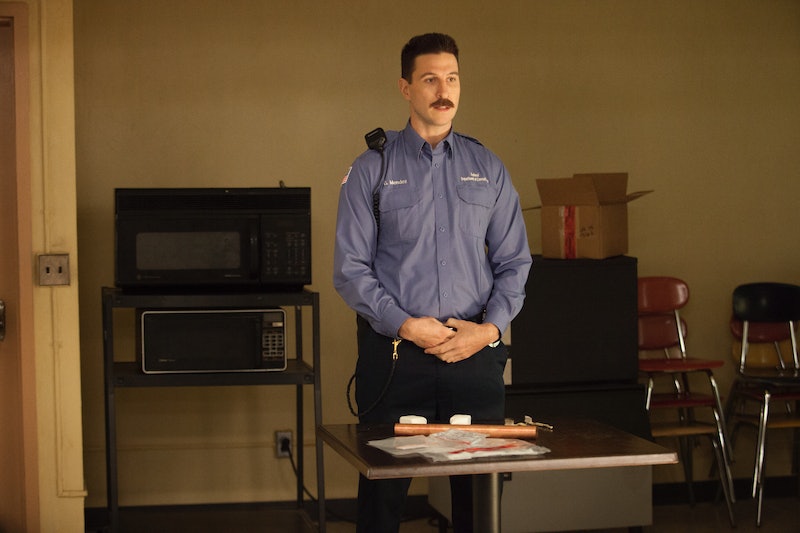 While Orange Is The New Black is a proudly woman-focused show, some of the series' memorable characters have been men. Unfortunately, those male characters are usually memorable for the absolute worst reasons, such as Season 1 stand-out character Pornstache. This C.O. brought drugs into Litchfield, which he traded for sexual favors, and framed an overdose that was his fault as a suicide. Not an example of an upstanding citizen by anyone's standards. Pornstache was crass and unpredictable during his introduction, but has since turned into a fairly pathetic criminal himself. Will Pornstache be in Orange is the New Black Season 5 for another update on the character's whereabouts or is the show done with the character? SPOILERS for Season 5 ahead.

Pornstache's presence in the show has diminished with each season. He played a major supporting role in all of Season 1, appeared for a two episode arc in Season 2, and only showed up for one scene in Season 3. In Season 3, he was a bubbling shadow of his former self, still hopelessly in love with Daya and believing that taking care of her and her child would help bring him meaning. Almost a parody of the notion that having a child can change a troubled man for the better, Pornstache's obsession with raising the child is just as dangerous as his other vices. Pornstache didn't appear at all in Season 4, hinting that OITNB may have been done with Pornstache's story for good.

But Season 5 proved that the show still has a little room for Pornstache, even if his story is pretty much complete. The story of Pornstache was that of a man who used the institutional failures of the prison system to put himself in power, and what happens when someone who has grown used to abusing the system that they live in loses access to that system. While Pornstache was on top of the world in Litchfield, it seems that he is anything but in whatever prison he currently resides in. The only woman who still seems to care about him is his own mother who can only respond to his delusions of fatherhood with "OK, sweet pea. OK."

However, two seasons latter it looks like Pornstache is on his way to something resembling a better life — and at the very least not having a negative effect on others around him. In the Season 5 episode "Tied To The Tracks." Daya calls Pornstache's mother to take her up on an offer to raise Daya's child who would otherwise be raised in foster care. It's a touching exchange, especially on Daya's part, and Pornstache can't manage to hide his excitement at overhearing the conversation. He hugs his mother, cries at the idea of raising the daughter he believes to be his, and attempts to talk to her before being reminded that part of his probation includes no contact with Daya.

While the character was reprehensible, actor Pablo Schreiber's performance as the guard managed to find a shred of humanity within the character and turned what could've been a one-note man into an electrifying performance, especially in what may end up being his final scene of the series. First a guard, then a prisoner, and now a free man with a new future and an unbelievably improved taste in facial hair. OITNB may now finally be done with Pornstache's story, and if so, the character got a fitting send-off doing what he does best – crying over a situation that doesn't really involve him.