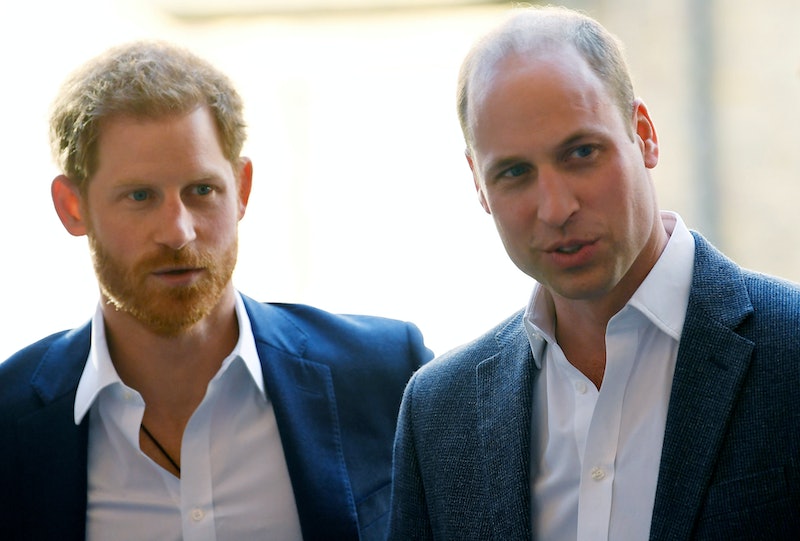 Since Prince Harry and Meghan Markle's wedding is almost here, it's fun to look into what the special day will entail. And it will be especially interesting to see how those closest to the husband and wife-to-be will be involved in the festivities; in particular, Harry's brother, the Duke of Cambridge. Is Prince William in the royal wedding? As Kensington Palace previously announced, he has an important role during his brother's big day.

William won't have just any ol' role during the royal wedding. In fact, he'll be by his brother's side as his best man. On April 26, Kensington Palace announced that the Harry asked his big bro to be his best man. In addition, the Palace shared some awesome photos of the two princes, including one fun throwback photo of the two donning some police officer get-ups. According to the Palace, William is thrilled about his role in the wedding, "The Duke of Cambridge is honoured to have been asked, and is very much looking forward to supporting his brother at St. George's Chapel, Windsor on May 19."

The best man role comes along with some important duties for the Duke. As royal expert Marlene Koenig noted to Harper's Bazaar, William will likely help plan the stag weekend, which is akin to a bachelor party. He'll also be there to offer his brother emotional support on his big day. Basically, the duke is going to be Harry's righthand man come May 19.

Shortly after the news was revealed, the two brothers attended the Greenhouse Center charity in London on April 26. A reporter asked William how it felt to be asked to be Harry's best man, and he couldn't help but respond with a little joke. William said, "It feels great, a real delight." The prince then added, with a chuckle, "revenge is sweet." This likely has something to do with the fact that Harry was William's best man at his 2011 wedding to Kate Middleton, and could more specifically have to do with Prince Harry reportedly covering the car William and Middleton drove off in with decorations.

Harry got some jokes in himself and said, "I got down on one knee," in terms of how he asked his brother to be his best man. Markle's fiancé also said that William's known about his wedding role "for months."

As previously mentioned, William will be returning the favor by being Harry's best man. The younger prince took on the role during the Duke and Duchess' 2011 wedding, where he stood by his older brother's side in Westminster Abbey. Later in the day, Harry gave his best man's speech to at an evening wedding reception, which went off without a hitch, according to the Daily Mail.

The publication reported that Will and Middleton were both incredibly moved by the prince's speech, in which Harry reportedly said that he loved the Duchess "like a sister" and that he was inspired by the couple's love story. It sounds as though William has some big shoes to fill when it comes to his own upcoming best man's speech.

William is not the only member of his family who is expected to be a part of the special day. His children Prince George and Princess Charlotte are also expected to be involved in Harry and Markle's wedding party. According to ABC News, the prince will likely be a page boy. His sister is expected to be a bridesmaid, as the same article noted.

While the rest of the family may have roles in the festivities, don't expect the Duchess of Cambridge to have one. Seeing as though she just welcomed the couple's third child, Prince Louis, only a few short weeks ago, she's taking a step back during the wedding. According to Vanity Fair, Harry and Markle didn't want to put any pressure on the new mom come May 19, so that she can simply enjoy the happy day. A source told the publication, "Frankly, Harry and Meghan are just happy that Kate will be there given she will only just have given birth."

When Harry and Markle's wedding day arrives, and you see the groom standing at the altar of St. George's Chapel, you can expect his older brother to be right there beside him.

More like this
Why You Won’t See Prince William & Kate Middleton Hold Hands At The Queen’s Funeral
By Darshita Goyal
When Will Prince William & Kate Middleton Be King & Queen?
By Jake Viswanath
Ed McVey Shares A Surprising Connection With Eddie Redmayne
By Catharina Cheung
Oprah Winfrey Revealed Her Hopes For Prince Harry & The Royal Family
By Maxine Harrison
Get Even More From Bustle — Sign Up For The Newsletter