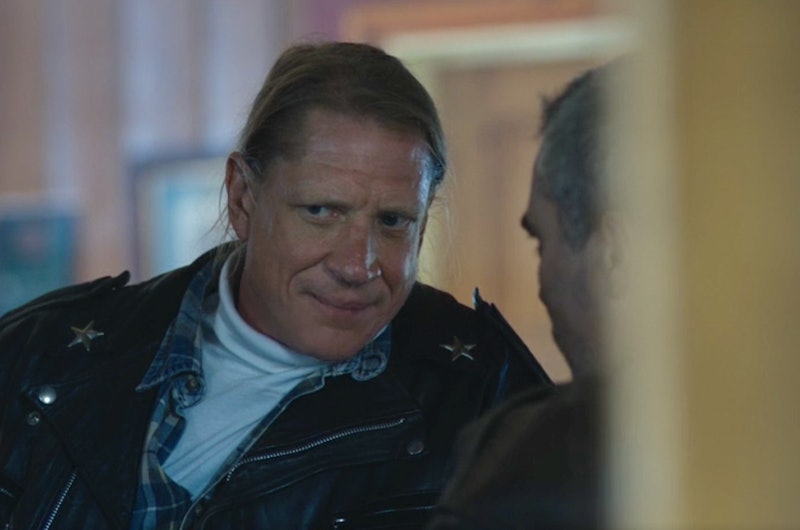 ITV's Quiz is the perfect lockdown viewing – an edge-of-your-seat drama based on a scandal that shook the world of early '00s entertainment. And, as well as retelling the very public downfall of Charles Ingram (aka the 'Coughing' Major) and his wife Diana, Quiz also uncovers parts of the story that most of us won't have heard about. Namely 'The Syndicate' and its leather-clad leader. But is Paddy Spooner based on a real person, or is he a work of fiction?

In short, yes. The character of Paddy Spooner, played by Jerry Killick, is based on a real man of the same name who appeared on three different versions of Who Wants To Be A Millionaire? in the UK, Australia, and Ireland. Roughly calculated, it appears Spooner won more than £370,000 in total from the Millionaire? format.

However, some aspects of Quiz's Spooner character are different from real life. For one, the two men's physical appearances don't really match up – Killick's Spooner has long hair and a penchant for biker jackets. IRL Spooner seems to prefer a shorter do and polo shirts.

And the name of Spooner's organisation has also been changed. As explained by James Graham, writer of the original Quiz stage play and executive producer on ITV's adaptation, in a statement sent to Bustle UK: "We call this expert group The Syndicate, which is based on what Paddy Spooner called his Consortium."

Explaining exactly what the Consortium did, Graham says:

"[They were] a series of expert quizzers and talented individuals who both grew to understand ways in which you could manipulate the phone line system to be selected to go on the show and then offered a bespoke service to clients who hired them to help them get both ‘chair-wise’ as they called it – how to work out being in the chair and to play the game – and also, infamously, the phone-a-friend being diverted to this special secret room which we depict in the show and did exist. And as we reveal in the drama, nearly 10% of winnings in the history of the show came through that system."

According to Graham, Spooner came to see his original stage play and spoke to the actors in it. And for the ITV adaptation, he went one step further, meeting with the chairman of Celador’s Television (the production company who commissioned the original Millionaire?) Paul Smith, who is portrayed by Mark Bonnar in Quiz. Smith was chairman at the time the coughing scandal took place, and it's a role he still holds today.

"One of those fun and quite surreal examples of how making a TV show about a real event started to affect the real event that we are depicting. Because it opened up new worlds and possibilities for Paul. He became re-intrigued by the story and wanted to reach out to find out more information about The Syndicate, as we call them," Graham explains, adding: "So very brilliantly Paddy Spooner, now retired from his days of getting people on to the show, was happy to meet with Paul. We greatly benefited from that conversation they had in understanding more about quite the extent to which Paddy penetrated the show. All of that information is new and we are revealing that in our drama for the first time."