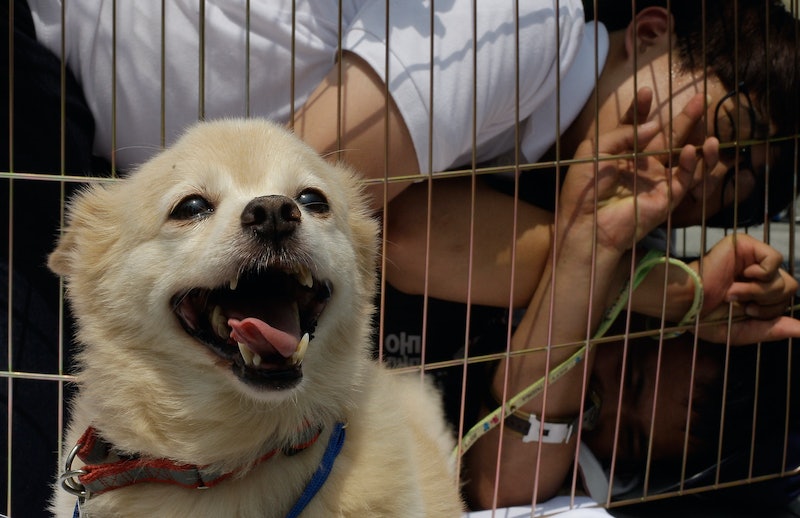 Giving your dog a raw chicken to gnaw on may seem like a generous treat, but it could cause paralysis and even death, according to a new study from the University of Melbourne’s U-Vet Werribee Animal Hospital. Raw chicken necks are a popular snack, especially for people who feed their animals raw diets. But this new research says that feeding your dog raw chicken could cause paralysis, and veterinarians are recommending that people avoid it. Researchers from the U-Vet Werribee Animal Hospital examined 74 dogs, some of who had acute polyradiculoneuritis (APN), a condition that causes nerve damage and paralysis. Dr. Matthias le Chevoir, the study's lead researcher and a neurology veterinary specialist, described APN in a press release about the study. “It is a rare but very debilitating condition where the dog’s hind legs first become weak and then may progress to affect the front legs, neck, head and face. Some dogs may die from the disease if their chest becomes [paralyzed],” he says.

Previous research has shown that raw diets could lead to illness — researchers from Utrecht University in the Netherlands found that raw food diets have been linked to salmonella and E. Coli — but this study found that dogs who eat a raw chicken diet are 70 times more likely to develop APN. Even though raw diets are sometimes recommended by veterinarians, they can be dangerous. Study lead author Dr. Lorena Martinez-Anton said in a press release that Campylobacter bacteria can trigger APN. It's found in raw and undercooked poultry, unpasteurized milk and contaminated water, according to the U.S. Food and Drug Administration. “We predict that the microbe Campylobacter is likely to be the reason for the dysregulation of the dog’s immunity and therefore, the symptoms of paralysis,” she said.

The theory proved true — after analyzing fecal samples, researchers found that dogs with APN were almost 10 times more likely to have a Campylobacter infection. Smaller dogs were also at a higher risk. “A significant association is also found between APN and smaller dog breeds. Based on our clinical experience this seems to be because smaller dogs are more likely to be fed smaller bones like chicken necks,” the researchers said. According to a press release about the findings, the same bacteria that causes APN also causes Guillain-Barré syndrome in humans, a disorder caused by your immune system attacking your nerves, according to the Mayo Clinic.

“These bacteriological results were consistent with the hypothesis that the uncooked chicken meat was the source of the Campylobacter and as a result, triggered APN," Martines-Anton said in the release. "We find smaller dog breeds are fed more chicken necks as they can’t eat larger bones. In humans, it is proposed that the Campylobacter bacteria, which is commonly isolated from commercial poultry products, contains molecules similar in structure to part of the nerve cell. This similarity confuses the immune system which attacks the body’s own nerves, resulting in paralysis."

So what should dog owners do? According to these experts, you should avoid raw chicken necks until more research is conducted. “We would recommend that owners choose regular dog food rather than chicken necks until we know more about this debilitating condition.” the study says. If you save raw bones for your dog as you cook, it may be a good idea to dispose of them instead. While your bone-chewing pup isn't guaranteed to develop APN or any other condition, this report provides convincing evidence that they're at a significantly higher risk for serious complications. Stick to regular dog food and treats, and you're much less likely to be potentially putting your pup at risk.