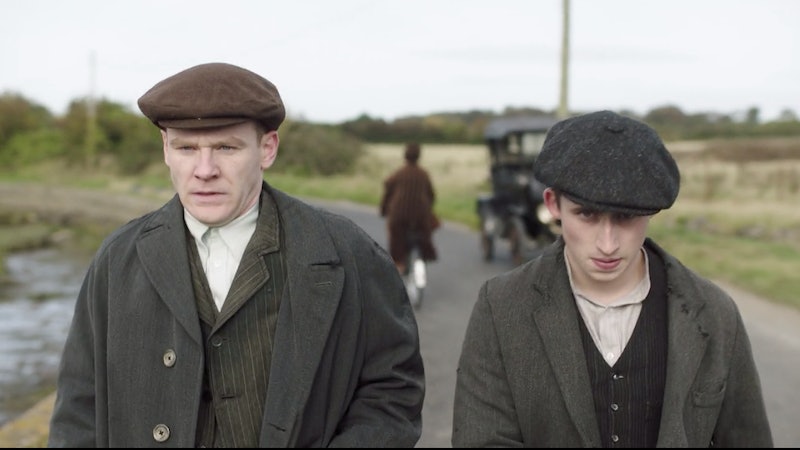 If fact-checking period pieces is your favorite kind of entertainment, then Rebellion Season 2 may just fit the bill. The Netflix show returns Friday, Feb. 22 and takes place in 1920, during Ireland's War for Independence. Since it's based on a historical event, Rebellion is loosely based on a true story. But the series also takes some fictional liberties — think Downton Abbey or Peaky Blinders — so not everything should be taken at face value.

To back up a bit, Rebellion Season 1 originally aired on the Irish network RTÉ in January 2016 before arriving on SundanceTV later that year, per the Irish Film & Television Network. The first season followed Dublin's 1916 Easter Rising, which was a short-lived rebellion against the British, per the BBC. According to the same article, the Irish Volunteers, Irish Republican Brotherhood (IRB), the Irish Citizen Army (led by James Connolly), and over 200 women played significant roles in the insurrection. And while the British ultimately squelched the uprising, it paved the way for Rebellion Season 2's War of Independence.

The Sinn Féin movement (meaning, "we ourselves" in Gaelic) was led by a man named Eamonn De Valera at the time, according to the BBC. In 1919, the report continues, De Valera set up the Dublin assembly Dail Eireann, which quickly proclaimed autonomy from the British. Thus began the War of Independence, or the Anglo-Irish war, per another BBC report, where the Irish Republican Army (IRA) fought the British by means of guerrilla warfare. The IRA was led by Sinn Féin member Michael Collins (played by Gavin Drea in Rebellion Season 2), who played an instrumental role in the War for Independence, per his BBC biography.

As a retaliation, future Prime Minister Winston Churchill assembled a militia known as the Black and Tans, per the Independent. These men were mainly soldiers from World War I and police officers, but they often operated outside the law, and were even encouraged to do so. What's more, their bloody efforts didn't stop the IRA's equally violent opposition. "It was astoundingly counter-productive," historian Peter Hart told the Independent. "The militarized police formed their own death squads and regularly engaged in reprisals against civilians. IRA violence only increased."

Britain eventually gave in to the IRA's demands and established the Government of Ireland Act in 1920, the BBC detailed, allowing separate parliaments for both Ireland and Northern Ireland. However, the Sinn Féin weren't satisfied with the limited power, and in December 1921, the Ango-Irish Treaty was established, which declared Southern Ireland an Irish Free State, per the BBC. And while that wouldn't keep Civil War from ensuing in the years following, the first BBC report explained, the War of Independence was still a vital part of the Republic of Ireland's history.

And while all of this is the historical backdrop for Rebellion Season 2, the Netflix series (which originally aired on RTÉ in Ireland) took some liberties. Several critics took issue with the glaring historical inaccuracies in Season 1, and although Irish reviews had similar gripes about the second installment, Rebellion (titled Resistance in Ireland) had a more positive response. Besides, what period drama doesn't veer from history at least a little bit? It's part of the fun of storytelling.

Irish Times critic Peter Crawley, for instance, pointed out some of Rebellion's flaws while praising the overall series. "Are there historical inaccuracies? Maybe. But this isn't a documentary," Chris Wasser wrote for the Independent. "We're only here to tell you if Resistance is any use. And it is — just about, anyway."

So although Irish history buffs should take the events of Rebellion Season 2 with a grain of salt, it also looks like a fascinating take on Ireland's storied past.